Out in the world when nearly everyone is asleep, darkness broken by points of ancient light, promise of a new day behind massing storm clouds, I am washed with chicken skin in recalling a vivid dream I had last night.

In this dream, people were pouring out of their homes and gathering in the loi, on the beaches, along the stream banks, in a spontaneous swelling of support for kanaka maoli. There were no signs, no costumes, no shouts, no slogans, no leader, so far as I could tell, save for the propelling guide of conscience stirring in countless hearts.

As I stand looking up at the stars, flesh puckering, my own heart stirring in the transitioning time between dark and light, I see, as clearly as the seven-starred constellation of Makalii, that overthrow and occupation are the fundamental hewa that must be corrected in Hawaii. Colonization is the the grave injustice upon which so many other wrongs have been perpetrated.

Why are we surprised that a nation that would, by force, dominate and enslave another, also allow the soil to be paved, the rivers to be poisoned, the iwi to be desecrated, the political system to be corrupted, the indigenous people impoverished, imprisoned for petty crimes?

Why do we rail against the symptoms, while failing to address the disease?

I think of Kamehameha, who waged war, and then returned to the loi, and my friend Kaimi, a true maka'ainana, who once told me that every kalo plant is a kanaka, a warrior in waiting. The necessary correction, he said, will occur not in the voting booth or offices of government, but through connection: opening loi, clearing auwai, working together to get kanaka back on their 'aina, the life-producing land.

When the deluge passes, leaving the clouds pale pink, the mountains misty, the ground soft and yielding, I step into my own taro patch and begin pulling weeds, discovering dozens of keiki beneath the overgrowth, ready to thrive.

As the weed pile expands, I reflect on a conversation I had yesterday with another young kanaka, who told me, I have become increasingly aware that politics is an outmoded and inefficient vehicle for positive change. As an empowered individual, I think I can accomplish more without the constraints of an inherited political system.

And my reply to him was, I agree. 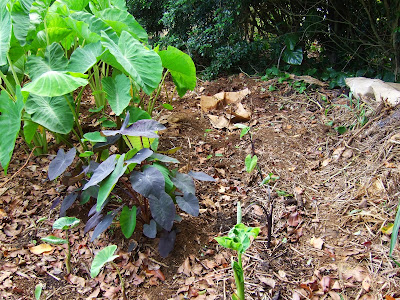 I could not agree MORE, Joan! I love that you shared your dream... a dream we can ALL benefit from with no less than LOVING ACTION! I and others are MORE than ready so let's see how many are FO'REAL that would actually BEE READY to join this VIBE of TRUTH, LOVE and ABUNDANCE FOR ALL, you know the ones that TRULY ARE AWARE, AWAKE, and READY for POSITIVE CHANGE with action by loving example for ALL to gain! Mahalo for the loving share that shows YOU REALLY DO care and I know YOU do! Let's just see what happens here... WE OWE it to OURSELVES... we need to ALL UNITE and BE the BEST EXAMPLE WE CAN BE... POWER IN NUMBERS and we so do NOT need kala to do something as great and wonderful as THIS! C'MON, Kauai, LET'S REIN with LOVING action and DON'T WAIT! It's gonna be a coooool snowball effecting the Change WE WANT TO SEE! IT IS UP TO US! WITH ALOHA... IMUA!!!

The existing political system is about who controls the guns and jails. It used to be worse before the commoners got the magna carta signed. Beware of all political systems, new and old.
In the end, we're just trying to keep the thuggiest Kings at bay.

The Hawaii Supreme Court accepted Henry Noa's appeal last week.Look for them to dodge the issue.

I love your dream....and came to Kauai to support such an Intention.


The political system is focused on power, money and control....not "for the people." (just those who throw money, perks, and parties

When things get "bad enough" the "masses" will rise again with some sort of civil disobedience and violence. Its History...paved by the Rulers who neglect the people's needs. Perhaps being out gunned the violence will be perpetrated in new ways in cyberspace and biological weapons. Its fodder for a SCI-FI novel. The Hunger Games?

Nostalgia and historical invention, all on this still sunny morning. Kamehameha used foreign built ships, along with the largest armada of Hawaiian style war outriggers ever assembled, together with foreign CANON to win his victories. Foreign influence and invention has been part of Hawaii ever since the evil inventions of metal and steel found the way to these isolated shores. The hard fist of power and control is and has part of Polynesia, Micronesia and Melanesia forever. It is force, fear and power that has always ruled the world. It is a wunnerful peeling to romanticize about the past, but freedom was not one of them. The Alii were Alii, and then there was everyone else, today it seems that everyone is Alii, but the real world don't work like that. Someone has to do the actual labor, there won't be welfare or foodstamps, li' dat. There are benefits that can be shared by many cultures and societies, but there will never be a return to the perceived Eden of the past. One idyllic country that many people count as being "oh so wunnerful" is Bhutan, and certain parts of Bhutan are wunnerful, but take a look at the 1980s, Bhutanese elites regarded a growing ethnic Nepali population as a demographic and cultural threat. The government enacted discriminatory citizenship laws directed against ethnic Nepalis, and stripped about one-sixth of the population of their citizenship and paved the way for their expulsion. "It is a man's own mind, not his enemy or foe, that lures him to evil ways."
Buddha
A transition to the past has unintended circumstances and the first circumstance is that ALL the people (except the guberment elites, the ones with the guns) get the El Shafto.
As the great mind, Mr. Rogers said "Since we're neighbors, let's be friends"

Hawaii in the 19th century was threatened by colonization from the U.S., Britain, Russia and Japan. The U.S., not all that interested in the islands to begin with, did it partly as a form of self-defense against the others, two of which (Japan and Russia) would have been far more destructive than the U.S. or Britain.

Life in Hawaii before contact was likely short and brutal. It was an illiterate society without science, governed by superstition, completely isolated, and therefore completely removed from progress. (Not all progress is bad, especially if you like words and ideas.)

Life in primitive societies wasn't all some modern types claim it was. As far as independent thought goes, show the alli'i a better way of doing something, or disagree with the role of women, and you likely would have been beheaded for your troubles. Please don't glamorize it.

Which colonization are we talking about? The big island was long divided among warring tribal chiefs, until they were forcibly colonized (oh, I mean "unified") by kamehameha's ancestors. Then, not satisfied with merely ruling the big island, he invaded the remaining islands, engaging in bloody wars which the people of those islands would would surely have called "wars of colonization." To claim that only one colonizer - the U.S. - among the thousands of colonizers, (the Hawaiians included) that have chased weaker societies off their land since human history began, and ruined the garden of eden, is to view history with a prejudiced eye. What if the polynesians who colonized hawaii in the 6th-10th centuries had encountered a peaceable society already there before them? Do you think they would have hesitated to rule by bloody force and dispossess those that arrived before them?

I'm talking about the colonization we can do something about, the one that's in place right now.

And I'm not talking about re-creating 1600, but getting kanaka back on their land.

To get them on you have to get off!
Those who agree with repatriation are free to leave anytime.

> Life in Hawaii before contact was likely short and brutal. It was an illiterate society without science, governed by superstition, completely isolated, and therefore completely removed from progress. (Not all progress is bad, especially if you like words and ideas.) <

If anyone needed proof that 19th century colonialism's Euro-Superiority mindset is alive and well in 2013, there you have it.

Ethnocentric bigots who spout off their "knowledge" about Hawaiian history come out of the woodwork whenever the topic of justice for Kanaka arises. Sick.

..and whenever the subject of kanaka comes up, the anti-knowledge crowd seems to come out as well.

Indigenous knowledge untainted by racist foreigners, knowldge passed down generational within the 'ohana, in our chants and stories. Not your whitewashed version.