When driving past an old beach cottage being taken apart in Wainiha last week, I joked to my passenger, "So is that another 'unsubstantial improvement' going down?” 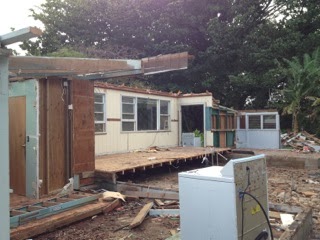 By which I meant an obviously substantial reconstruction passed off as less to skirt the federal flood laws that require elevating the house.

Turns out it is. A 54-year-old house that looked like this: 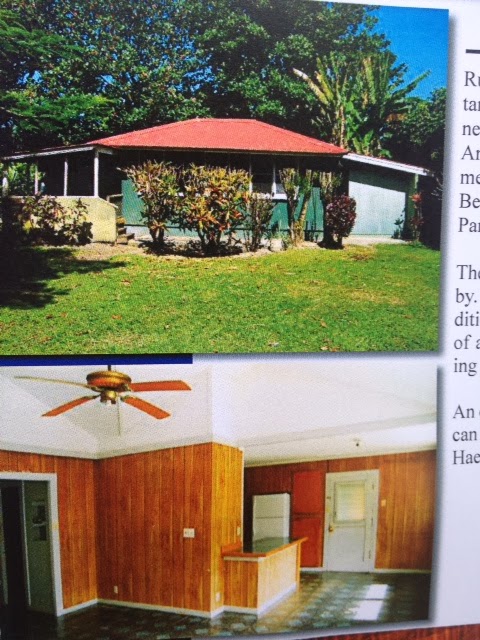 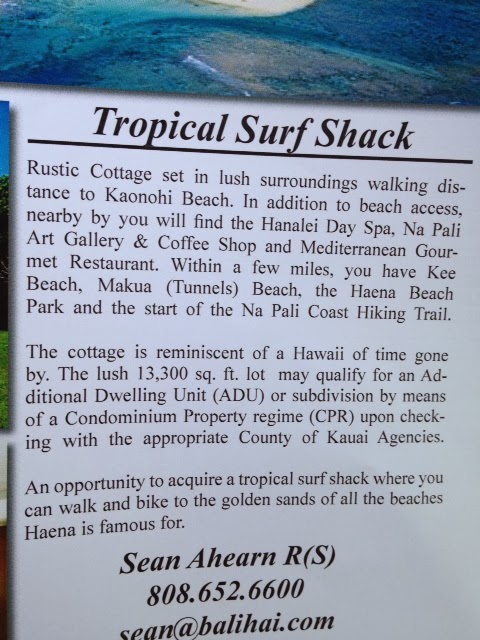 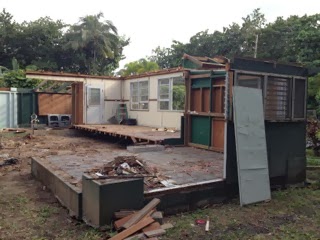 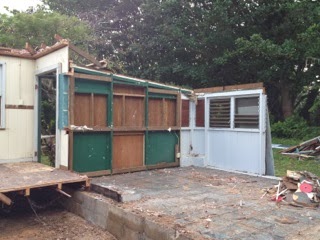 Stripped down to the slab: 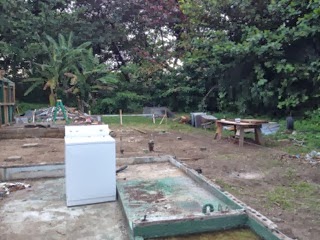 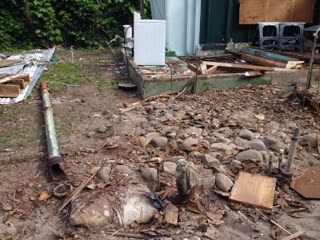 Now it's being expanded by 120 square feet: 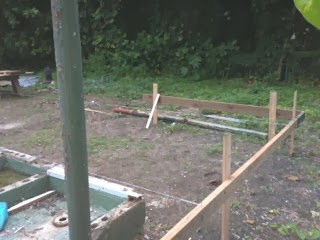 All by virtue of a $45,200 county building permit that says: ADD MASTERBED/BATH,LAUNDRY RENO KITHEN [sic].

The building division deemed these upgrades "unsubstantial," meaning the house was not required to be elevated like its stilt-standing neighbor.

This occurred because the county is still up to its old tricks: accepting a high-ball value for the house and a low-ball estimate for the repairs. This allows the owner to claim the improvements are less than 50 percent of the market value, and thus "unsubstantial" and not subject to flood laws.

In this case, the county accepted a $178,050 market value for a 947-square-foot, single-wall-construction, termite-ravaged shack built in 1960. The county real property tax office, meanwhile, assessed the entire property — the house and one-third of an acre in an extremely desirable coastal setting — at $531,800.  According to FEMA's guidelines for implementing the federal flood law:

The market value of a structure reflects its original quality, subsequent improvements [a $7,044 repair job in 1994], physical age of building components and current condition. For the purposes of determining substantial improvement, market value pertains only to the structure in question. It does not pertain to the land, landscaping or detached accessory structures on the property. Any value resulting from the location of the property should be attributed to the value of the land, not the building.

Even if we were to believe that "tropical surf shack" has not experienced any depreciation, and has only appreciated to achieve a  $178,050 market value, how can we possibly believe it can somehow be entirely rebuilt, and 120-square-feet added, for just $45,200?

Fake formulas aside, isn't the county also supposed to consider the intent of the federal flood law, which is to keep people safe and reduce flood damage to buildings? And isn't the county zoning ordinance pretty clear that non-conforming uses — unelevated dwellings in a flood zone — aren't supposed to be expanded?

As in a larger footprint,  a "remodel" that is by all intents and purposes the construction of a brand new home? As FEMA states:

Can the building division truly say, with a straight face, that this is not a reconstruction?

In the Abuse Chronicles series, I documented several examples of dubious "unsubstantial improvements" that allowed beach shacks to become luxury vacation rentals, with ground floor bedrooms in the flood zone.

In its subsequent inquiry into TVR irregularities, the County Council focused almost entirely on the planning department, though I urged them twice in public testimony, and numerous times in this blog, to investigate the building and engineering divisions.

Yet somehow they managed to fly beneath the radar, and continue to do the same sketchy stuff that makes a mockery of county and federal laws, as well as construction values. 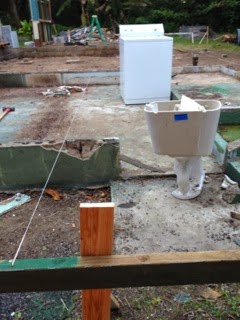 People who own existing buildings that are being substantially improved will be required to make a major investment in them in order to bring them into compliance with the law. They will not be happy. For these reasons, it is easy to see that this basic rule can be difficult to administer. It is also the one time when your regulatory program can reduce flood damage to existing buildings.

Yet for some reason, Kauai County seems unwilling to risk making new owners unhappy. Instead, they are allowed to expand and upgrade houses in a part of the island where floods are a regular occurrence and people have actually died in tsunami waves.

The inevitable unhappiness, it seems, is being deferred to a later day.
Posted by Joan Conrow at 10:12 AM

Kickbacks, bribes and fear of a reduction in TAT for Kauai. Move along, nothing to see here.

The ABC store in Kapaa was also a "remodel" when it was built. It use to be a gas station. All that remained was the big blue ball

It's like the 3 monkeys. If nobody makes a formal complaint it's see no evil, hear no evil, speak no evil.

And we push more people into a small area. I remember what it was like up here 45 years ago, nothing like now. Squeeze too many rats into a small space and they go crazy. Why is it we seem to need a huge place to get out of the weather these days ?

The corruption & degradation on our island are the result of collusion by not only our public officials with mainland developers but also all Kauaians who are too eager to make this happen. Think of the lawyers, the architects, the contractors, the landscapers, the realtors, etc. The net is big and wide. That beach cottage was taken apart by local hands, the same hands that planted and fertilized all the trees & bushes to privatize the beaches. No can say NO to $$$ that's all!

The New Jersey property owner Is at fault if there is any fault here, but they surely know the law as it applies to rebuilding. The local laborers as you describe who worked an honest 8 hours for an honest compensation have absolutely nothing to do with any development enhancements. You sound like an antagonistic insipid whiner.

We may consider working eight hours
honest work, but come on..... we know when something fishy's going on....

the contractor who wrote the bid must have known it was an underestimation. There are probably 2 bids, one for the county gov, one actual bid because you cannot build a house for 45,000. The workers are earning an honest living, the official who accepted the estimates without depreciation and no realistic rebuild value, now that would seem to involve some unsavory behavior.