Walked out the door last night and gasped. Stars! The flat gray cloud cover had finally moved on, revealing a deep black bowl chock-a-block full of twinkle and glitter. It did this soul good to see the source, and brought to mind words in an email, with a link, I'd just received from a friend:

Remember that the calcium in your bones and the iron in your blood were originally created at the core of a red giant star that died billions of years ago.

Yeah, in case you hadn't noticed, or forgot, there's this connectivity thing going on....

The rainy weather allowed me to catch up on my reading, including Elizabeth Kolbert's excellent two-part piece on extinction, published in The New Yorker. She wrote of how Georges Cuvier caused a sensation in 1796 when his work with ancient bones offered proof of extinction:


[The] bones hinted at events both strange and terrible. They “seem to me,” Cuvier said, “to prove the existence of a world previous to ours, destroyed by some kind of catastrophe.”

Darwin's theory of extinction — that it was a routine side effect of evolution— contradicted Cuvier's, which held that species died out as a result of catastrophes, or, as he also put it, “revolutions on the surface of the earth.” Darwin's view prevailed, Cuvier's was discredited, and for more than a century Cuvier was ignored. More recent discoveries, however, have tended to support the theories of Cuvier's that were most thoroughly vilified. Very occasionally, it turns out, the earth has indeed been wracked by catastrophe and, much as Cuvier imagined, “living organisms without number” have been their victims. This vindication of Cuvier would be of interest mainly to paleontologists and intellectual historians were it not for the fact that many scientists believe we are in the midst of such an event right now.


It seems that it began about 13,000 years ago, when modern humans started spreading out and killing off big animals, in what is now called the megafauna extinction. And as our numbers have grown, we've continued to expand our reach to all corners of the earth, sowing the seeds for cataclysmic change in our wake. As Kolbert writes:

Humans are now so rapidly transforming the planet — changing the atmosphere, altering the chemistry of the oceans, reshuffling the biosphere — that many scientists argue that we've entered a whole new geological epoch: the Anthropocene. In this sense, the crisis that Cuvier discerned just beyond the edge of recorded history was us.

Where it will lead us, we do not know. Perhaps the rapid erasure of species will allow aggressive, highly adaptable animals like rats to change and evolve to fill the newly created “ecospace,” the “ecological niches that....[they] helped to empty.” Quite possibly, it will bring about the end of humans and our reign on earth.

It's been more than 200 years since Cuvier stunned the world with the concept of extinction. Now it's a part of our everyday experience. Our children play with plastic dinosaurs, we maintain lists of endangered species, we have people among us on this island who heard the last, haunting call of the 'o'o bird in the Alakai swamp. 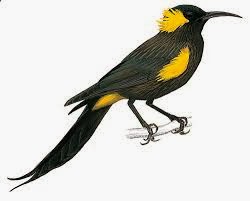 It is real to us, our ability to extinguish life, but also strangely unreal. We know we are having a hand in it and we fear the outcome, largely because of what it might mean for the human race. Though some of us also have moral qualms about our systematic destruction of the vast, beautiful complex web of life that has been spun since the last "revolution upon the surface of the planet."

It seems we must "do something." So we talk of changing our fuel sources, our carbon emissions, the genetic structure of plants and animals, as if we can just continue on the same general trajectory using slightly different technology. We talk of sustainability, as if such a state is possible with our numbers in the multi-billions, our appetites voracious and never-whetted.

But we don't talk much about changing our ourselves, of radically shifting our perception so that we no longer see ourselves as the oh-so-clever, big-brained masters of the universe, but merely the stuff of a giant red star that burned out billions of years ago.

We are creating the current “revolution upon the surface of the planet.” The course we've set will only be altered if we simultaneously stage a revolution within ourselves. How different might we be, the future be, if we aced a dramatic perceptual shift?

To borrow the words of Gil Scott-Heron:

FYI: I think Dave Boynton was the last to hear the last Kauai o`o, calling and calling and getting no answer. He died in 2007.

Joan don't make me look. I like my bubble.

Saw the author on Jon Stewart and heard her on Democracy Now. Sounds like a really great book, but I'm afraid it might be too depressing. Seriously, I try my best to lessen my big giant footprint, but I think it's a lost cause.

Rein is spelled reign but not rain. ;-) Interesting Joan. The history of the concept of extinction. The comment about the last 'o'o calls being heard then that person dying is poignant yet we can save that memory of those calls he had by recording the endangered species now which they must be doing. It's a hopeless cause as long as money being used as a tool of power disappears and a more equitable way to live is devised which I don't have much faith will ever happen. Mon12

Sad. I fear for the future of my children. They will look upon us as environmental criminals.

i remember dave fell off a cliff w/ his camera...a few days before he told he surfed 'hanalei by moonlight' early morning so he could make it to kokee on time....aloha again DB...Dean

Thanks for catching my mispelling and my drift.

The real problem is that there is no cohesive "ourselves". It would take a global cataclysmic event to enable, without total nuclear annihilation, a consensus of thought and action to prevent what is slowly coming down the trail to meet us.

Joan,
I know it is hard to be sanguine when one lives in the extinction capital of the world but perhaps a wider lens can help put things into perspective. Think about all those organisms that perished following the invention (evolution) of photosynthesis. Talk about climate change! And, the invention of the flower led to the extinction of many non-flowering plants. In all seriousness, mass extinctions are not new. It's just that this time humans are the cause and we feel bad about it. Though not bad enough to seriously do something. Nature, however, does not care if we destroy the web that supports us. Life will go on with or without us.