As I watched golden finches happily munching from a thistle bag this morning as humming birds slurped from a feeder, I was reminded of a sad story I read about the massive solar plant in California's Mojave Desert that's burning birds as they fly overhead. 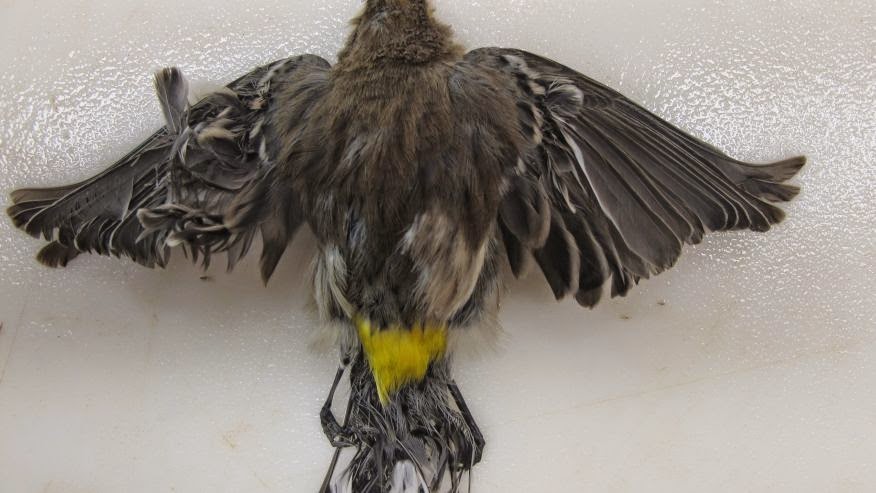 An average of one bird — nicknamed "streamers" for the smoke plume that follows their fatal fall — is ignited every two minutes at the $2.2 billion BrightSource Energy plant. As the Associated Press reported:

More than 300,000 mirrors, each the size of a garage door, reflect solar rays onto three boiler towers each looming up to 40 stories high. The water inside is heated to produce steam, which turns turbines that generate enough electricity for 140,000 homes.

One of the plant's owners is Google, whose international servers consume 260 million watts of electrictiy — enough to continuously power 200,000 homes. According to a 2011 report in Time:

Solar may be renewable, but is it really "clean" if one plant alone is killing possibly as many as 28,000 birds — some of them rare — per year? And I was reminded again that no energy source is truly "green."

Now the company wants to build an even bigger facility, with BrightSource offering to pay $1.8 million in compensation for the anticipated bird deaths. The money would be used to spay and neuter domestic cats, which kill an estimated 1.4 billion birds annually. But we all know that fixed cats still hunt, and as conservationists pointed out, the program does nothing to help the desert bird populations impacted by the solar plant.

Must every human activity be supported at the expense of the natural world? Does everything really have a calcuable price? Are tens of thousands of birds deaths a reasonable trade-off for solar power?

What about TV, radio and cell phones, when communications towers kill an estimated 7 million birds annually? How long can wild populations survive those kinds of losses? And if 70 percent of the deaths are caused by just 1,000 towers, and 70 percent of those losses could be eliminated by changing the solid red light to a blinking one, why isn't it done?

It got me thinking about the true costs of our other actions, and how we're all part of the problem, much as we love to point the finger at others. Just as we choose to focus attention only on some problems, while ignoring others.

Consider this: Some 80,000 chemicals are available for use in the United States, but just 200 of them have been tested under the Toxic Substances Act. Furthermore, there's been virtually no testing to determine how these chemicals interact with one another.

And I wondered, given how little we know about the chemicals that are part of our every day life, how can Kauai County ever determine through its puny little EPHIS whether agricultural pesticides are causing illnesses on the westside? Or even assess the extent of health problems there? At the end of the day, the folks who live there aren't going to know any more, or be any better off, than they are right now.

To me, that's the travesty of Bill 2401/Ordinance 960. People were suckered in with a promise of hope, answers, solutions, help. But they're not going to get any, even if the law stands, because this expensive, bitter exercise never was about identifying a problem and finding a reasonable solution.

Politics so rarely is.
Posted by Joan Conrow at 8:36 AM

Ordinance 990 is dead, what's your lame excuse now Gary, Tim, Mason, Jay, and JoAnne? No wonder Mel, Ross, and Arryl had kick your ass in the Primary. It's gonna be worse in the General, at least 3 of you will be gone for sure. Aloha.

"It got me thinking about the true costs of our other actions, and how we're all part of the problem, much as we love to point the finger at others. Just as we choose to focus attention only on some problems, while ignoring others."

I love it. No truer words.

Joan, you and many of your readers were spot on when they predicted the death of 960 thru the Courts. It could have been killed thru many violations. Now, Tim, Gary and of course their hand maiden Chock will pursue all kinds of tax strategies to get Big Ag.
Time to hold CHOCK, BYNUM,HOOSER and JOANN accountable. Jay Furfaro is somehow overlooked in the conversation. BUT, be clear it was JAY who voted with Hooser and Bynum. It was JAY who gave CHOCK his seat in the midnight charade. It is JAY who allows the whackjobs to drone off topic at the Council meetings.
JAY must give an apology on WHY he and the Council got this island into this Hoale/Local divide and alienating Big Land The best thing that can happen now is to kick JAY, CHOCK, JOANN, GARY and TIM out. get a good leader and go to BIG AG and say " Aloha Nui, we are sorry, can we start over? Will you work on the dust screens and other items that we want?." APOLOGIES NOW. JAY IS THE Big Man In Charge (BMOC) and he must give a statement.

We are not going to be here in this life to see what happens to our aina. Don‘t tell me that this is good for our island. Back in the plantation days we didn't know better but now we do know.

I am not now and never have said "this is good for our island." My point has always been the approach to dealing with it was wrong, as has been made clear with the judge striking down Ordinance 960.