Sometimes it takes a bit of humor to put things in perspective.

That occurred to me last night while watching Jon Stewart puzzle out the intense conflict over on the Keystone XL Pipeline on “The Daily Show.”

Why has that particular project created such divisiveness? As Stewart points out, as only he can, it's not the first pipeline to cross the U.S.—Canadian border. Nor is it the first to penetrate into the depths of the nation — others already carry crude to Colorado, Montana and other states — or the first to transport tar sands oil.

And it's not like delaying the pipeline is stalling the excavation of tar sands, or preventing the shipment of dirty crude to and through America. It's being moved right now, on barges, trucks and trains — sometimes with environmentally tragic results. 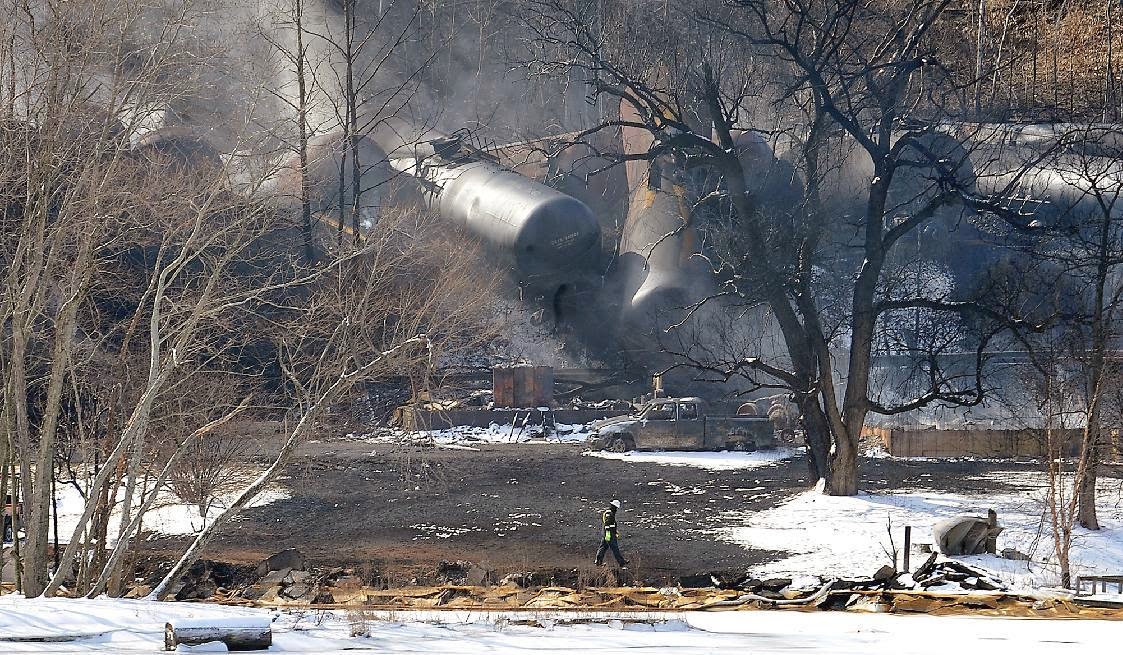 But it's become a battleground because environmental activists have turned it into a symbol — and politicians have been quick to pile on with the kind of rhetoric that only they can espouse. Republicans: “Economic security from the threat of terrorism.” Democrats: “Billowing black clouds have contaminated our children.”

The truth is, this country already has Mario Bros. levels of pipeiness. Adding the Keystone XL to the mix would be like farting inside of a manure factory. But it's a lesson for activists. If even in a relatively zero sum fight, you can tap into our country's vast outrage reserves, you can take a fight that should've lasted one day and miraculously make it last eighteen hundred.

We're seeing a similar sort of divisiveness — and rhetoric — as activists tap into those same “vast outrage reserves” to fuel a fight over agriculture. But only the “industrial” kind, by which is apparently meant any farm that is larger than a few acres, employs technology and/or incorporates genetically modified crops, pesticides, herbicides and chemical fertilizer.

This fight is playing out locally, causing some Kauai folks to reject out of hand a dairy that wants to reduce milk imports by using a rotational pasture system that also reduces the need for imported feed.

It's caused people to go absolutely nuts over the seed fields, classifying every acre under production as a toxic waste site where heinous experiments are taking place. 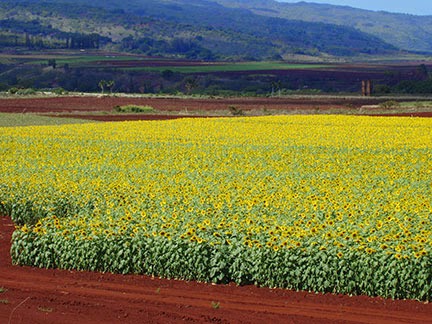 It's caused a serious rift between commercial farmers, who know the economic and practical challenges of growing food in Hawaii, and some citizens, who adhere to an idealistic, simplistic food ideology that often doesn't translate well into reality.

And it's prompted opportunistic politicians to use rhetorical excess to fan the flames of divisiveness and further confuse voters while feeding their own giant egos. 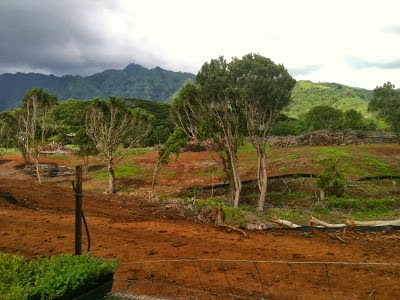 Turning “industrial” ag into a symbol of all that is wrong with the food supply hasn't actually stopped, or even slowed, its production anywhere in the world. People are still consuming it in vast quantities, just like we're consuming vast amounts of oil. Yeah, some folks have switched to GMO-free or organic, just like some have converted to solar energy.

But overall, nothing has really changed because of these fights. The bigger, deeper, underlying questions and issues remain unanswered, unaddressed, while folks scrap over symbols.

So maybe, thanks to people like Jon Stewart, we can start to see how ludicrous, how utterly nonsensical, these symbolic pitched battles really are. And once we start laughing at ourselves, perhaps we can let down our defenses and take a step forward, to that place in the middle where the best solutions reside.
Posted by Joan Conrow at 7:36 AM

Speaking of ag, what are the farmers here and on the mainland going to do about the dwindling water supply?

Fear works and politicians know it. Fear in being poisoned, fear in loosing you livelihood. Politicians use our fears to get themselves elected, gain power over us and it works because we let it work. Once either side gains power through fear it is almost a mandate for partisanship. We must not let our fears elect those who lead us or we will be doomed in this partisan hell for ever.

8:42 There is lots of water. Your listening to the wrong people. You will see the rivers flow when there is rain. But we have plenty water. It's Mauka.

No one including you Joan will address the real problem which is overpopulation.

Dear 8:42, you are not in california anymore, Kauai is the wettest place on earth. water shortage not existent here.

11:44 Thanks for being part of the solution. Unfortunately those dumber than you are reproducing themselves.

@11:32am - you're deluding yourself. We are experiencing a very dry winter.

to 11:32am - you're deluding yourself. We are experiencing a very dry winter.
deluded, not at all, it has been wet and rainy for much of the winter so far. There is no water shortage . Maybe at best you live somewhere it doesn't rain much, but the island is quite green.and your reality is different than well shall I say reality.

Dear 11:32 are you sure? Kauai seems to have turned into a suburb of LA. regarding the water, there is a trend (and I hope it changes for the better) of drier and drier weather for Hawaii and the western US. Some point to the persistent high pressure system that has been pushing the moisture north towards Canada and Alaska. If this trend continues, good luck to us all.

Population control?!?! Are you the same people asking for a better highway so it can accommodate more cars... Put your trust in your elected officials, they know what's best...perhaps it is best to leave that highway just the way it is, it might turn a few West coasters off of moving to a 'traffic congested, smoky, toxic dump'.
Population control, stop vaccinating your kids it causes autism, and the government started putting gps chips in each vial!! That aught to Population control with the hippies and the tin hat wearers.
As with the fear and the politics...its been going on for as long as I've been around, and will be here after I'm gone. It works!!!

All you water worriers.
Just turn on your faucet and drink.
Kauai Water Department provides some of the best Municipal Water in the world.
Kauai has a sophisticated matrix of Ag ditches. The real farmers on the west side are not going out of business because of a drought.
The modern Ag techniques use less water to grow.
Sugar took approximately one million gallons per ton of raw sugar. Say 8 to 15 tons per acre? Do the math. Some water by ditch, some by rainfall. The successful fields all used hana wai ditches.
And just think most ditches on the Eastside are owned by the State. They are in terrible shape. They can be repaired, but to fix a ditch in your own backyard, you need approval from the State...it takes about a year or two for the State to say "no, leave the ditch alone"
The west side ag guys keep the ditches in perfect order. BTW, Mr Hooser, it takes a lot of sweat to keep any ditch open.
Thank you west side seed growers for keeping the hana wai ditches working, Lots of history in those old waterways,
Perhaps the BS Kapaa/Lihue individuals and groups that are so afeared of water shortage could get together and open the ditches and resurrect the old reservoirs. All talk and not a clue of what source and transmission of water is all about.
8:42 Kauai farmers biggest threat is from the government. Farms may get zapped by weather, market conditions, wind, rain or disease...but BY FAR, the biggest threat to farming on Kauai are three people sitting in the council Chambers.

3:23 PM, don't let me rain on your parade, but it seems you had a bit too much coffee today, far too agro and really, a troll because i won't agree with your idiosy? Down boy

On over population: you could take all 7,295,950,586 people on this planet (as of this writing according to the world population clock) and give each person a little over 2' by 2' square space , a space that would be comfortable in an elevator, and place the entire population of this planet in the tiny little state of Rhode Island. Look it up and do the math. It will take over 8 billion folks for that space to shrink to an even 2 square feet. The problem lies in the management or rather mismanagement of OUR resources. But I will concede, doing away with certain religious poppycock that prohibits and denies the use of birth control wouldn't hurt.

re: the discussion over rainfall and water. We are currently in an El Nino weather pattern. That is a warming of the ocean above the average temperatures which are measured at numerous locations around the Pacific Basin. During an El Nino weather cycle it is characterized by an abundance of relatively dry, and windy cold fronts that come along at regular intervals. Also during the event the jet stream does not push down as low as it normally does. For those of us in agriculture it is somewhat of a desirable winter condition because there is less leaf disease associated with prolonged rainy weather that usually occurs during our "winter". The El Nino weather event occurs every few years, sometimes in back-to-back years. While the strong wind is not desirable it sure is nice to have those cool clear nights after the front passes!

While the tropical Pacific Ocean is at the borderline of El Niño, the overall atmosphere-ocean system remains ENSO-neutral.

at today's pesticide buffer zone bill hearing before the house ag committee, hooser rudely directs ag chair tsuji to let the neighbor island guys outside the conference room to testify. ag committee member tokioka goes on to tell hooser, "relax gary we got this." hooser replied, "BITE ME!" in amazement tokioka asks "what did u say?" hooser replies, "BITE ME, JIMMY!" damn, that hooser lost his marbles

Sucks if one flys from outer island to testify and gets shut down by these politicians. Fuck Jimmy. He's playing these games like he did last year shutting down the public hearing process. So much for public service. "Bite me" is mild compared to what I'd like to tell that fool.