The new owners of the Prince Course — Jeff Stone and Reignwood International — are taking a scorched earth policy to the greens there, applying herbicides to more than 100 acres of links. 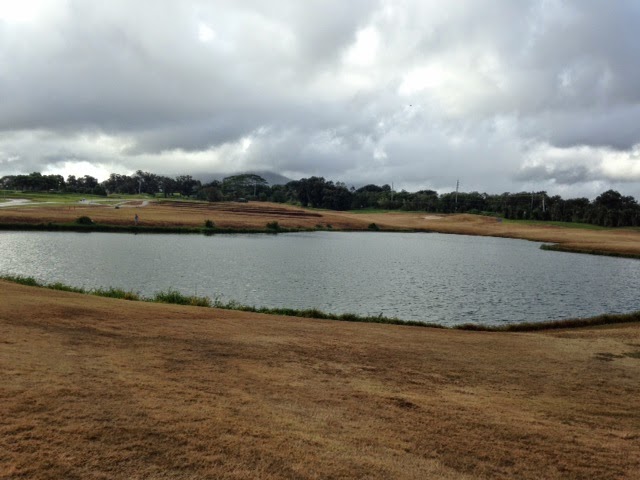 And then what do you suppose they'll apply to make the new grass grow again?

As you can see, they sprayed right up to the water's edge, with no buffer zone at all. 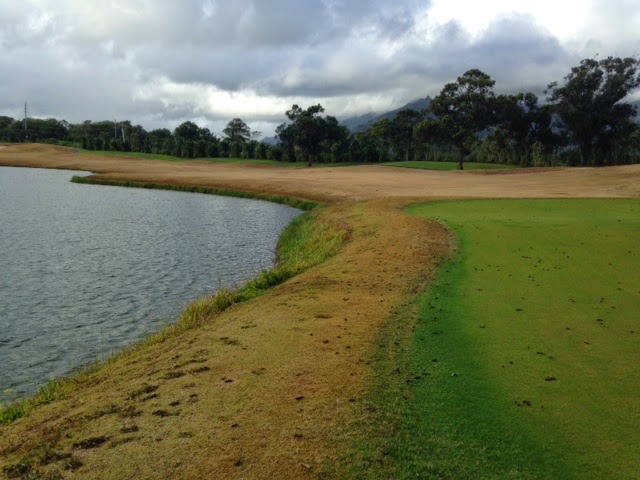 And as the nene doodoo indicates, endangered birds are frequenting the sprayed greens, with unknown effects. 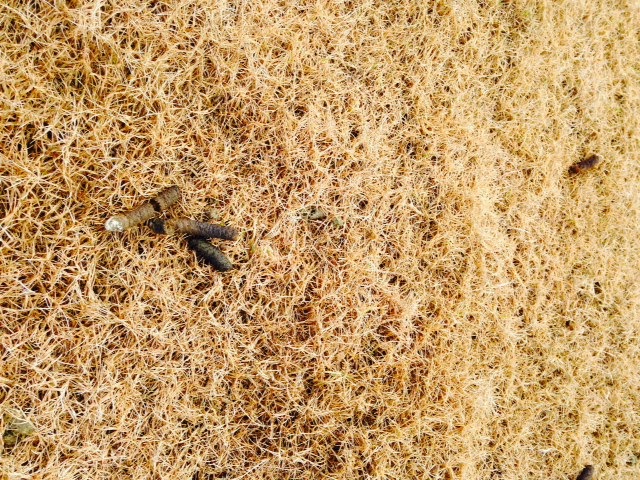 Where's Councilman Gary Hooser, the outraged KKCR DJs, Fern Rosenstiel, Dustin Barca, GMO-Free Kauai, Babes Against Biotech, Hawaii SEED and all the other folks who have been screaming about pesticide and herbicide use on the westside? Here's something happening right in their own backyard.

Surely their concern isn't limited only to multinational chemical/seed companies, to the exclusion of multinational developers. Unless, of course, their interest all along has been in destroying agriculture, so resort/tourism uses can flourish.

As I reported last July, a study by University of Hawaii researchers shows that Island golf courses use significantly more pesticides than the seed/chem companies.  The report, last updated in 1999, estimated that 119,867 pounds — nearly 60 tons — of pesticides are used annually on golf courses in Hawaii.

By comparison, approximately 2.5 tons and 5,884 gallons of restricted use pesticides were applied to Kauai's seed fields in 2012. The pesticides applied to links in Hawaii include Chlorpyrifos, Dicamba, 2,4-D and Roundup — the same herbicides, fungicides and insecticides used on seed fields. Yet the anti-GMO groups have singled out only agriculture for attack and regulation. Why?

While the NYT is focusing on Greenpeace's activities to halt coal mining, the international “nonprofit” has also been active in stymying India's foray into biotech crops, using the same misinformation, propaganda strategies employed in the Philippines and Thailand, where the group also destroyed test crops.

Though the NYT is framing it as a free speech issue, and it's true that dissent must be allowed in a democratic society, there's more to the story than that. India is reacting against what it sees as foreign meddling in its affairs.

Greenpeace — like many groups active in Hawaii — is not at all transparent in revealing either funding sources or expenditures, which are significant. Greenpeace International claimed revenues of about $171 million in 2013. And while the NYT unquestioningly accepts Greenpeace India's claim that 70 percent of its funding is generated in-country, no public records confirm either its budget or its funding sources.

What is clear is that Greenpeace has an extraordinary presence in India, with 268 permanent staff in that country alone, compared to 221 in North America, 175 in Southeast Asia and just 48 in Africa. It's hard to believe that money isn't being funneled into India from outside.

And in other news, the Hawaii State Legislature apparently wants to ensure that only the big boys are allowed to operate medical marijuana dispensaries. It's moving forward with HB 321, which would require folks to plunk down a $25,000 nonrefundable application fee. Ouch,

And if you get the green light, you have to pay another $75,000 for each license approved, plus $25,000 for each retail dispensing location allowed.

The bill also imposes a special general excise tax of 25 percent on marijuana sales by dispensaries, and a retail marijuana special sales tax of 10 percent.

So far, Sen. Ron Kouchi and Rep. Jimmy Tokioka have voted against the dispensary law, while Reps. Dee Morikawa and Derek Kawakami were in support, Derek with reservations.

Council Chair Mel Rapozo also was able to muster a majority to support his resolution opposing any dispensary in Kauai County. The reso carries no legal weight, because the bill prohibits counties from enacting ordinances or rules to prohibit the use of land for medical marijuana dispensaries.

Still, it expresses the reactionary mindset of those who are willing to discriminate against medical marijuana patients by denying them the same rights that other patients have to purchase their prescribed medications in a legal facility. How can they justify that stance?
Posted by Joan Conrow at 9:15 AM

The legislature of this state as well as all others is often not much more than a forum in which big business seeks to "legally" restrict competition. The lobbyists for these companies are often the ones who literally draft the proposed legislation that accomplishes this anti-competitive act. Of course, it will never be presented as what it is - a measure designed to reduce competition and therefore, lead to increased profits by the larger companies. Instead, the bill will always be cloacked in language designed to seemingly "protect" some vital public interest. Perhaps that was the case with the medical marijuana bill - who initially drafter this legislation? If we knew what lobbying or trade group proposed and drafter this legislation - and if government was as transparent as it should be, we would know, because we have a right to know - then we would all have a much better idea of which companies are trying to limit competition by ensuring that smaller competitors will not be able to afford to pay these fees, and we would also know which legislators are fronting these efforts. Then we might begin to have an actual democratic process, and not merely a forum whose primary purpose is to reduce competition and ultimately harm the public interest.

The bill restricts legal competition but most people will pay the "black market" dealers if the mark up for taxes and licensing fees is too high (no pun intended). If getting rid of the neighborhood dealer is the goal, just legalize it and let people grow their own.

With a special general excise tax of 25 percent on marijuana sales by dispensaries, and a retail marijuana special sales tax of 10 percent, people will still either grow their own or buy it as they always have on the black market.

Joan- A hundred thousand to open a dope clinic is peanuts.
Big Boy Bynun got, what? close to 3 hunnerd.
100K t'aint nuttin'.
So if there are one thousand or so legal medical marrywanna permits and most grow their own in abundance. In fact, several just sell it.
It is all a joke.
Where will the New marrywanna peddlers put their dough? The banks that are Federally aligned can take the money as a deposit...but the Feds can seize every f^ing cent...dope is illegal.

Golf courses are using a new selective herbicide. All the nutjobs made the good old ones illegal. The new chemicals turn the grass yellow, but the mahiki will return pronto.
By the way, it is allowed to be sprayed anywhere on the golf course.
Good point tho', let the NS nutjobs get their G-strings and thongs in a tight pinch....all for nothing. M'God, just the mental image of a pinched thong of a NS 60 year old Fistee is enough to make Omidyar Dairy Cows look cute.

What selective herbicide are they using?

Golf courses use fungicides, insecticides, herbicides , which ones are Princeville Golf course using?When, where?

John Hoff's letter on Exporting aloha is shameful.Reminds me of Kealia's ad before they went bankrupt, plant yourself, move to our finest agricultural lands.

The more TVR's and BB's, the less aloha for visitors. When residents are displaced by visitors, it's impossible to keep the aloha

Speaking of Jeff Stone has anyone bothered to check on his clearing of the point for his personal pad across from the fire station? A culturally significant spot to say the least, has an archaeology report been done?

Its not the first time he's impacted communities where he develops just give a google of him and the list of shady activities is long. Mr Omidyar is a saint compared to this man, I'm just blown away as well Joan on how this man gets a pass by the "activists".

do we know how much of the herbicide from that study was Kauai's golf courses?

I'm just trying to imagine....what the differences would be between off-island-owned TVR's in a neighborhood versus off-island-owned second homes that are occupied maybe two months a year. The latter would be quieter most of the time, but both uses/ownership take the houses out of the local rental/purchase market. The fact that most, but not all, of those folks who are making these complaints are transplants themselves is both hypocritical and ludicrous. By your very presence here, you, yourself a transplant, are driving prices up and taking up housing that a local (B&R) family could be living in but can't by YOUR actions. Typical "drawbridge" mentality.

Gimme a vacant second home as a neighbor anyday. Thats a no brainer.

Does this mean Mel is not Joann's darling his week?