Sometimes, when confronted with something shocking, or startling, all you can say is wow. Just wow.

Like this bit of misogynist hate spouted on Facebook by a Mauna Kea “defender” in response to a petition in support of the Thirty Meter Telescope (TMT) posted online by Mailani Neal, a bright young student-athlete attending Hawaii Preparatory Academy in Waimea on the Big Island: 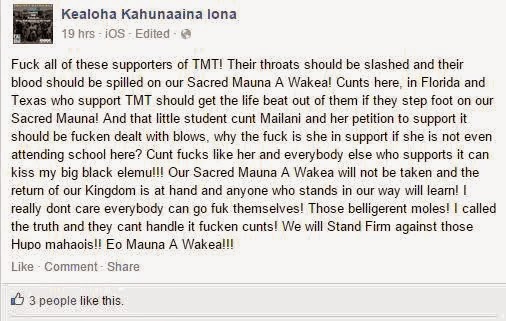 Gee, three people actually “like” this? Oh, and great way to build support for your cause, guy. Kinda reminds me of the “dialogue” that characterized the anti-GMO debate. Have any of the TMT opponents publicly denounced it?

Update: A reader shared this denouncement of sorts, or at least, a definite distancing, posted on Facebook. 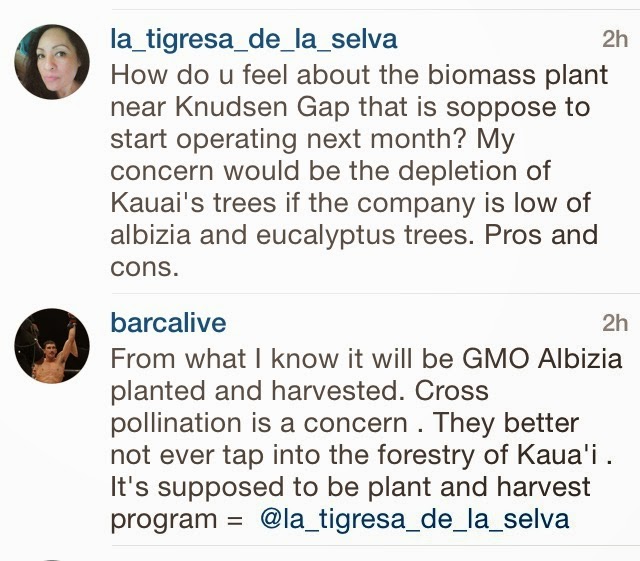 GMO albezzia? Cross-pollination? With what? Uh, yeah, sure, Dustin. Whatever you say….. And why does all of his rhetoric include a veiled threat?

Like this “CodeFore” blog post on the 1993 rape-murder of 4-year old Lacy Woolsey Ruff that claims “a cover up” by Kauai police and prosecutors has kept the real murderer out of jail, while his brother, who admitted to the rape, is serving a lengthy sentence.

I had to follow up with Kauai Prosecutor Justin Kollar, who replied:

We have been in touch with the author and many of the individuals mentioned. We followed up on this as we would in any case and will continue to do so.  We appreciate their vigilance and their intent to ensure that justice prevails; we share that intent.

Like the flaming comment thread on Friday's post about the homestay/B&B ordinance. This is obviously a very touchy subject. But tell me, how can it be anti-haole and racist to support a crackdown on B&B/homestays, if they're supposedly being operated by locals trying to hang onto their homes?

Mmmm, you can't have it both ways, kiddos.

Like the request — deferred at the last Council's meeting until the full panel is present — to expend up to $322,194 paying the final bills incurred defending the county and two others in the Tim Bynum vs. Kauai County et.al., civil suit. The breakdown is $135,525 for the county, $130,189 for former Prosecutor Shaylene Iseri and $56,480 on planning supervisor Shielah Miyake.

This is in addition to the $750,000 inlegal fees already spent, which means the county blew more than $1 million to settle a suit for just $290,000.  WTF? This is what happens when the damage done by a vindictive prosecutor is exacerbated by certain Council members who dragged out a settlement. Bad move, boys — and you know who you are. Your stubbornness, misplaced loyalty and/or sheer stupidity cost the taxpayers a pile of dough.

Or like this bit of social justice in Finland, where traffic and other fines are assessed on a sliding scale based on the latest income of the offender. Which is how a guy who made $7.2 million ended up with a $60,000 fine for speeding.

Compare that to the U.S., where everyone gets assessed the same amount, and poor people who can't possibly pay their fines endure years-long court ordeals, mounting costs and repeated imprisonments.

Joan- Once again you have picked a bad scab. The Anini child killing was a shock to the island. So much bad behavior. A quick result settled the island's nerves.
If there was injustice, Justin SHOULD follow up on this. This type of case has every elementfor which he stands. No one likes to regurgitate the past, but Justice must be served.
Hopefully the Bynum costs are finished. Amazing what happens when a group of "insiders" AKA the Council and Tim Bynum ALL knew that he would get about 300K payoff. 300K is standard payola for almost all County lawsuits. But the Bynum with his needle dick pokings at the legal process upped the Attorney costs to over a million. Thank you Tim. A real man and a Councilman who will FOREVER remembered as the Ricecooker King who had an illegal rental, twisted the system and got huge payoff. God Bless Amerika and all of its filthy self serving politicians who use insider knowledge for their personal gain. I'm not angry, just a little perturbed to see the likes of Bynum, Hoos and JoAnn destroy the old time ways of peaceful eye to eye negotiations and settling of differences. Where is a Fistee when we can use 'em, Oh yea! off to Switzerland. As if zee Sviss care two Swiss francs for anything anyone from Kauai has to say. The result will be from the Swiss. "Ach Nein! Der Islanderisch Polenesia haf now becomen white pipples? Waroom? Wie thought zey vould be bitte schwarze..Ach! Silly island pipples" As the Swiss follow the Germans and Deutschland uber Alles.
Gary, the Swiss will do anything for a buck. Anything.

Read on CodeForeBlog.com about how a horrible rape/murder of a 4yr old child on Kauai could have been prevented had properly trained people and CJIS been imbeded and how people who did not give up and how they are still fighting for Justice.

To their credit Kealoha Pisciotta has denounced the posting on behalf of the Mauna Kea Hui.

Joan- The biggest and most important Hawaiian movement in 120 years and the "misogynist hate" of one individual is the best blog material you can come up with? What about the thousands of others united under kapu aloha? Perhaps their story would make for a good blog or two? Your coverage so far of the We Are Mauna Kea movement does nothing whatsoever to enlighten and inform us of the real nature of this movement which is positively transforming our islands and so many lives here and around the world.

Thanks, Andrew, for pointing me to Ian's blog. I hadn't realized that the author of the rant, Brannon Kamahana Kealoha, "is also listed as the creator of the Sacred Mauna Kea Fund, associated with the Sacred Mauna Kea protest group. The fund has already raised more than $11,000 through an online site, gofundme.com, for inter island travel in support of the TMT protests," according to Ian.

And 1:41, I applaud those who are practicing kapu aloha. Still, as Ian also reports:

"Project supporters say there have been numerous reports of intimidation and bullying by protestors against Hawaii Island supporters, as well as union workers on the TMT job. Some have been serious enough that they were reported to police."

Mokes acting like mokes is nothing new Angrer management should be taught in all Hawaii schools. Most of Hawaii's problems are race related when in doubt blame the Haoles. It is only progress when things move forward. Do not confuse motion with accomplishment .

These nut cases drive all the sane people away. This asshole just signed his name on the death of the telescope protest. And a lot of other Hawaiian causes.
Who would put that person in charge of anything?

that rant is how a limited mind expresses itself.

Just want to comment on barcas statement about gmo albezia? First this tree was introduced here not native, second most albezia trees grown in their native lands ever grow tall as the shoots & small trees are the main diet of elephants. Please understand in no way am I advocating mass cutting of trees but I spend many hours deep mauka hiking & riding dirt bikes so I've seen first hand how these trees are covering & choking out our jungle forest species.
Biologists I know have told me no harm only good can happen by removal of albezia, particularly if composted (nitrogen fixing). Again I'm no biologist just wanted to share

Thanks, 4:28. You're absolutely right. Albezia are horribly invasive and destroying the watershed. And no, none of them are GMO!

Mahalo for writing about this along with Ian Lind.

Kealoha Kahunaaina Iona whose real name is Brannan Kamahana Kealoha Kamehameha Schools Class of 1995 is much worse than people think he is.

I made a post in my blog detailing the timeline and screen caps. It can be seen here