Like the albatross who are regurgitating partially digested squid — and, unwittingly, unhealthy plastic — into the gaping mouths of their hungry chicks on Kauai right now, Star-Advertiser writer Nina Wu shared a hearty dose of Center for Food Safety propaganda with her readers today. 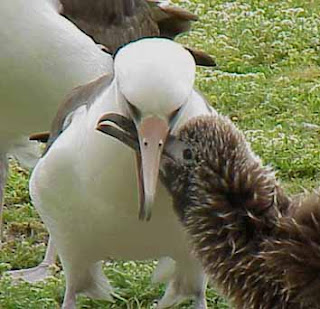 Without apparent question, and nothing more than a cursory rebuttal from the Hawaii Crop Improvement Association buried at the end of her piece, Wu let Ashley Lukens, a registered lobbyist for Center for Food Safety, make all sorts of unfounded claims about the seed industry's pesticide use in Hawaii.

Because of course Lukens, the former owner of a baby boutique, is qualified to present herself as a bonafide pesticide and GE seed expert. Just ask the Center for Food Safety, which recruited her for the job. 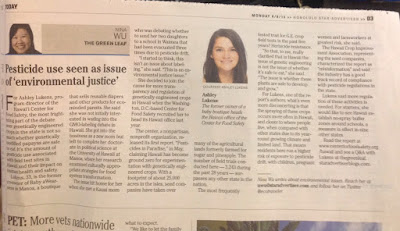 Lukens was in her usual fine form, making claims that Wu, had she conducted even the barest research, would have discovered have been discounted. Like how a Waimea, Kauai school was “evacuated three times due to pesticide drift.”

As I've reported several times now, and as was presented in a state Legislative hearing, no school in Hawaii has been evacuated due to pesticide drift from the seed companies. A state Dept. of Agriculture breakdown of school evacuations over the past nine years shows students were evacuated due to pesticide misuse by nearby residents, a school custodian and a landscaper — none of whom Lukens wishes to regulate.

Though Lukens tells a gullible Wu that her primary interest is in pesticide use, she was unable to tell me why CFS chose to launch its Hawaii campaign with anti-GMO legislation, rather than pesticide regulatory bills.

Nor did Wu apparently ever ask why Lukens is deeply concerned only about pesticides applied by seed companies, and not at with pesticides used by the termite treatment companies, which actually apply more restricted use pesticides than agriculture, and right in residential areas, with zero notification or buffer zones at all.

Lukens also makes the totally unsubstantiated claim that children, pregnant women and farmworkers in Hawaii run a greater risk of pesticide exposure than those in other states. But as I previously reported — and as Wu also could have learned, had she bothered to ask:

Hawaii farm workers are regularly tested for pesticide poisoning, including organophosphates and heavy metals like mercury, arsenic and lead, [state toxicologist Barbara Brooks] said. But DOH isn't seeing evidence of poisoning even among workers with direct exposure. The overwhelming majority of pesticide exposure calls originated from residential use.

It was interesting to see Wu's piece, since I just wrote yesterday that activist groups like CFS rely on fear and outrage to raise money. And sure enough, Wu dutifully leads off with;

For … Lukens … the most frightening part of the debate over genetically engineered crops in the state...

It makes me think of the language in the last CFS fundraising email, sent out on June 2:

It turns out that we are a real thorn in the industry’s side.

Yes, propagandists typically are. And so, sadly, are the journalists who give them a platform.

Meanwhile, Kauai Community College is eliminating its journalism classes, saying not enough students “in the local population” are interested in writing, or have confidence in their work. Perhaps it's because they have so few good role models, and little opportunity for employment, since TGI primarily hires from the mainland.

But then, who needs journalism when so many journalists regurgitate, rather than report, and you can learn everything you need to know anyway from social media memes?
Posted by Joan Conrow at 10:47 AM

I thought you were leaving?

I'm in Seoul. But get Internet there, you know.

Speaking of food safety, where does the sale of the placenta of a soon to be born child fall? See Craig's list Kauai FARM AND GARDEN. Crystal / Feather People, really, selling the placenta to pay for diapers!!
What body part is next?

I love the hilarious excuse that we have for journalism here in America. We need more Joan Conrows and Glenn Greenwalds and less some dumbass and who gives a shit.

Given the number of dickless wonders spreading self-serving propaganda about the GMO issue, does anyone need to ask?

Yes, why does the Garden Island hire so young and fresh from a mainland college, only to then let them go when they begin to understand the subtleties and do responsible reporting? We have a revolving door of young reporters who have no understanding of the contexts behind the incidents or meetings to which they are sent.

EPA will regulate airline emissions! About time! Ironic that tourism in Hawaii relies on the environment while contributing to its destruction. Much more important than GMO "infestation" but you won't hear much about it from the anti GMO realtors who need the buyers flying from all over the planet to Hawaii.

to 11:18, hiring people not from here is another strategy of our paper to cater to the newcomer and visitor and not local residents. They know nothing of the people, place or culture and have no desire to be a part of it. They could just as well be a paper anywhere.Reporting with no context.