Back in December 1996, a very high surf event caused extensive erosion along a stretch of shoreline in Haena, threatening three houses. 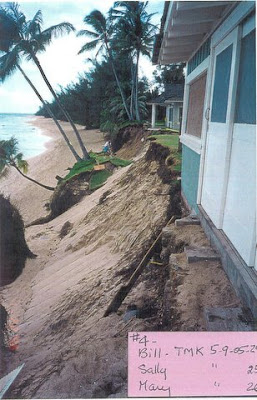 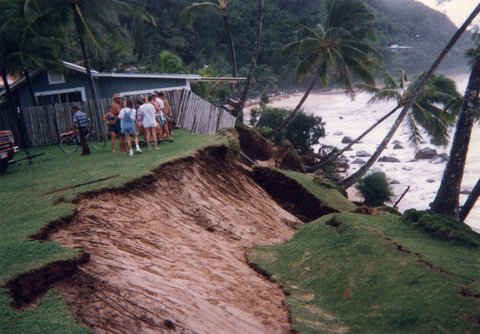 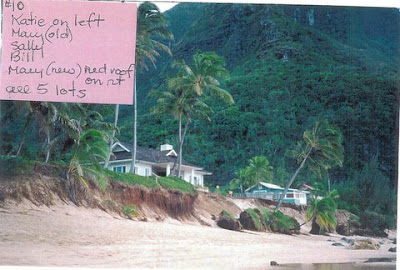 Kauai County and the state Department of Land and Natural Resources allowed the  landowners to install a sandbag revetment in front of five contiguous oceanfront lots. The county issued a Special Management Area emergency permit for what was supposed to be a temporary fix.

Condition #5 of the permit clearly states that “[t]he emergency shoreline protection measures shall be temporary [emphasis added] until acceptable permanent measures, which may include relocation of the structures, are approved through normal permitting procedures…

The state also issued an emergency permit, with conditions that specify (emphasis added):

“[t]he expiration date shall be December 12, 1997; and the permittee during the one year timeframe for this authorization shall prepare a shoreline survey and work to resolve the shoreline emergency through the appropriate permitting process:”

“The emergency shoreline protection measures shall be temporary until acceptable permanent measures, which may include relocation of structures, are approved through normal permitting procedures by the planning commission/department and other appropriate agencies.”


“Within one year of the date of this approval, the applicant shall submit a report prepared by a qualified professional, containing an assessment of the projects effectiveness, impacts on the shoreline, and recommendations for additional action. Should the measures be found to adversely impact the shoreline or other SMA resources, corrective action shall be identified and implemented, which may involve the removal or destruction of the sea bags.”

Yet here it is, nearly two decades later, and the sandbags remain in place, degrading the dune, hindering the natural movement of sand and potentially jeopardizing the county's adjacent Haena Beach Park. 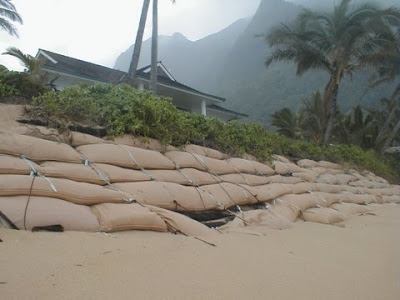 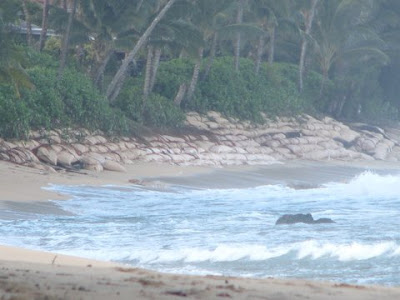 The ocean has continued to eat away at the revetment, and in 2000, 2002, 2003 and 2006, a bulldozer covered the exposed sandbags with sand pushed up from the fronting and adjacent beach. 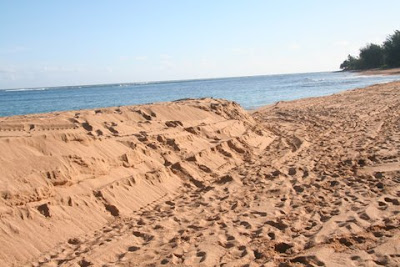 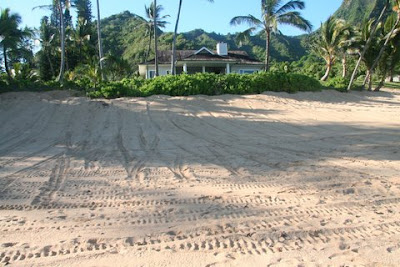 To its credit, the DLNR denied a fifth request to excavate the beach to cover the sandbags, telling homeowners:

In March 30, 2009, Sam Lemmo,  administrator of the state Office of Conservation and Coastal Lands, advised property owners to "remove the temporary structure, or apply for a CDUA [permit] for permanent shore protection so this matter can be resolved.”

The county also weighed in, advising the owners it would be carefully scrutinizing the CDUA permit.

Meanwhile, the sandbags have been deteriorating into rubbish that creates an eyesore on the beautiful beach and poses harm to marine life. 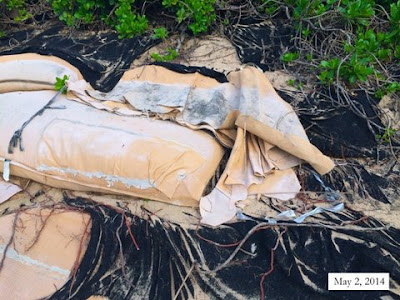 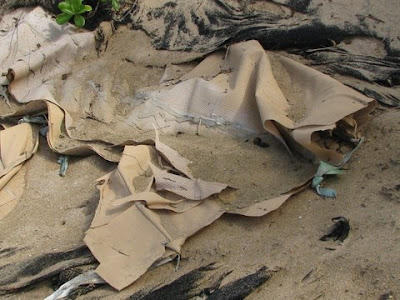 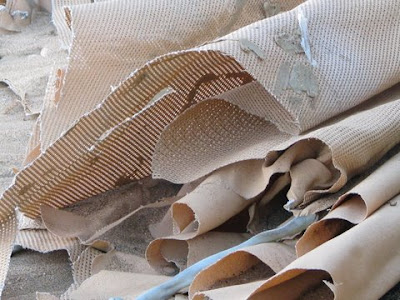 Other sandbags were dislodged from the revetment and trapped between the reef and rocks. 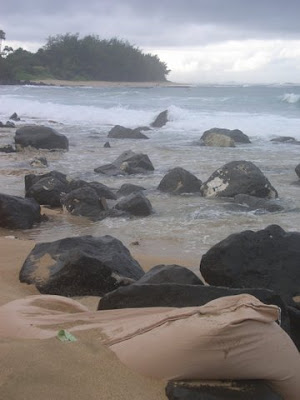 The beach has also become steeper, making it harding for endangered monk seals to haul out and rest in this marine conservation area.


And still the county and state allow the landowners to drag their feet as they upgrade their houses and repeatedly sell the multi-million-dollar properties. All five lots have changed hands — some of them multiple times — since the temporary sandbag revetment was installed.

One of the owners is Neal Norman, who acquired a lot for $1.35 million in 2000 and then sold it to his trust for $3.5 million at the end of 2008. How much of that increased value was due to the protective revetment, and the loss of the public beach?

In the midst of this mess, the state has approved construction of new houses on the two vacant lots behind the sandbags, imposing these conditions, among others:

This action by the board in no way legitimizes the sand bag groin on the seaward side of the property and the DLNR has the right to ask for removal of the structure should the landowner fail to comply with the County of Kauai Emergency permit (E)-97-03 declarations; or if it is determined that the structure is causing harm to the public beach.”

Condition #19 “No shoreline hardening, sandbags or other structures be allowed to artificially fix the shoreline for the life of the development. This condition shall be incorporated into the conditions for approval and filed with the Bureau of Conveyances.”

Longtime Haena residents Caren Diamond and Chipper Wichman have had enough. They're asking DLNR to order landowners to remove the sandbags and restore the beach to its natural condition. In an April 12, 2015 letter to Lemmo, they wrote:

In short, this has become a serious environmental problem - a problem that should have been rectified many years ago. While removing the revetment could have long-term stability consequences for the existing homes all of the current owners bought this property knowing that shoreline erosion at this location was a major issue and that the temporary revetment would have to be removed and that the permanent hardening of the shoreline would not be allowed as it is in conflict with the shoreline management policy of both the State of Hawaii and the County of Kaua‘i.

Our community is committed that this important public beach should not be armored but should be kept in its natural state.

The state, however, has punted to the county, saying the county needs to revoke its temporary permit before the state can act.

And all the while the bags keep falling apart, the sand keeps getting swept away and the properties keep increasing in value as the public beach pays the price.
Posted by Joan Conrow at 10:08 AM

Guys like Norman think they can do whatever they like....shake my head

Great story, Joan. One we wouldn't find anywhere else. Just when you think the County couldn't be more inept... Is ANYONE awake or did everyone either employed or elected by the County entirely give up? Or, could it be they didn't really care from the get go? I don't want to go to bribes and payoffs but something is seriously amiss.

Joan, could you explain photo no. 7 ?
Also, that coast has been disappearing in various speeds for at least sixty five years. The sand is quite distinct in the large size of the grains. If not for the geologic newness of the sand the beach that currently is shown, it would have disappeared years ago. Of course I remember when that stretch., the old Rice estate had only four houses, the oldest well back, with the sand going all the way to the road. It was mostly sand and kukui/kamani forest. Then later pasture portions.

Kauai man sentenced in vicious attack on elderly man
Jun 25, 2015 11:32 AM
LIHUE, KAUAI (HawaiiNewsNow) - A Kauai man has been sentenced to 25 years in prison for a violent robbery at a Kapaa liquor store.

Police say Kawika Manaku of Anahola, robbed the Kapaa Liquor and Wine Company on February 2, while on probation for a previous burglary.

Here's your POHAKU client rewarding Kauai with positive optimism helps all Kauai unite. Thanks to our corrupt judicial system and dirty pig cops more of these protect a criminal family and friend program graduates will terrorize Kauai's communities.

What say you now Shaymel?

A murdered defendant and now a almost murdered elderly businessman by two of your people.

4 pm -- Photo #7 was taken in 2006 to show the tracks left by the bulldozer that pushed sand from the public beach mauka to cover the exposed sandbags fronting the five lots in the conservation district.

More muckraking. This is simply old news. Once again your target names come out and your friend Karen Diamond's too. Neil Norman. Why do you dwell on him? Do you realize that theres an ice problem out there. Why don't all you busybodies start down that path for a while. Want to clean up your neighborhoods start looking into the ice problem in Wainiha, Hanamalu and places in between......What's the matter too dangerous? No fat cats to rag on? You are on the same old diatribe....Why do i bother? Good question....

Yes, it's old news, which is the point. This was supposed to have been dealt with 19 years ago, yet is hadn't been. Neal is mentioned because he personally made $2 million off this scam, which makes him stand out from the other land owners there.

And yes, we all realize there is an ice problem. Tell us, what are you personally doing about it? Why do you feel so threatened when I expose fat cats screwing up the public beach? Truly, if you're unhappy with my blog, why do you continue to read it? Hope someone takes the gun away from your head real soon.

The fact that the State is saying the County needs to revoke the temporary permit before they can act is ridiculous. It was a temporary permit for one year issued decades ago, the County needs to enforce this illegal shoreline hardening structure. This beach is too valuable to let it diminish to protect a few rich landowners properties. Please County and State, step up and enforce, protect our public beaches.

I wonder how many people are aware that the writer/commentator who seems to have a real issue with people of wealth worked (and was well paid) for many years as the caretaker of Anne Earharts Kalihiwai estate. For those not familiar, Anne Earhart is a Getty heir. I'm sure this won't make it by the Blog "monitor", but I've not missed the hypocrisy of her comments and seeming vendetta over the years.

First, as I've stated many times, I have no problem with wealthy people, only those who are unconscious. which is why I left Anne's employ, for which I got a house and in the last year was also paid a small stipend. I've neverbtried to hide that or the insights it gave me into the super rich.

Joan - How did u get a house out of quitting ur job?

I didn't. Rent-free housing was part of my employment.