I'm here in New York City – my first time ever. I'd always been a bit intimidated by the prospect of Manhattan, but it's so easy to get around, and people are very friendly.

I've been walking, walking, walking since I arrived last night, carried along in a sea of humanity, traversing streets that are an iconic part of the American culture — Park Ave, Madison Avenue, Fifth Avenue, Wall Street — cruising through Grand Central Station, looking up at the glittering Chrysler Building.

Tonight the Cornell Alliance for Science has its big event at the United Nations, where some of the 25 global Fellows will tell their own stories. Joni Kamiya, whose father's farm was saved by the creation of the transgenic Rainbow papaya, is one of them. It's been a real pleasure to meet Joni and her family, and to see the positive, inspirational impact she's had on the other Fellows.

It's been fascinating to meet people from various nations in Africa, as well as the Philippines, Bangladesh, India, Indonesia and the mainland U.S., all committed to doing what they can to end the hunger and malnutrition that plague so many on this planet.

Last night we walked over to the U.N. to check out the venue, and I was awed by the amazing view. 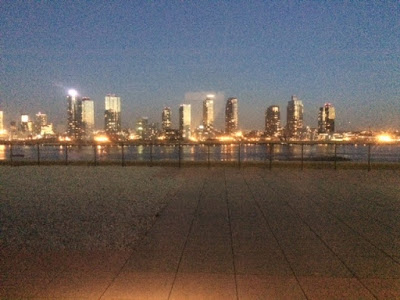 While taking the bus down from Cornell University yesterday, through the rural farmlands of upstate New York and Pennsylvania, cruising along past the office parks of New Jersey, I interspersed my sightseeing with a bit of web surfing.

I was interested to read a piece in the Hawaii Tribune-Herald. Sen. Josh Green, one of those who has been so outspoken in opposition to biotech crops and ag pesticides, was all pissed off because the Department of Health wasn't doing enough — as in spraying and medical check-ups — to stave off dengue.

And why? Because it would be so bad for tourism if dengue gets established.

Interesting, how people change their tune about pesticide use when they've got something at stake. I haven't heard Hawaii Center for Food Safety screaming about the DOH spraying pesticides to control mosquitoes in residential communities on the Big Island.

I wonder how Green and CFS would feel about using transgenic mosquitoes, developed by Oxitech, to help eradicate dengue. When the transgenic males mate with wild females, their so-called self-limiting gene is passed on to their offspring, and the larvae die before they can transmit disease.

When I was at the Transgenic Animal Conference in Tahoe last summer — yes, mosquitoes are animals — I interviewed a Brazilian researcher who had experienced excellent results in field trials done there to control dengue.

While residents in the test areas were initially concerned, the researchers did extensive outreach, and addressed people's worries and fears. And when folks saw the positive results, they started asking for more releases, because they had experienced a direct benefit: people weren't getting sick..

The Oxitech mosquitoes were more effective at controlling dengue than pesticide applications alone — tests in Brazil and the Cayman Islands reported an 80 percent suppression rate of dengue.

Meanwhile, Jan TenBruggencate has an interesting piece in Civil Beat about the stinkiness of stinkweed, which can cause people to experience headaches, nausea, clamminess and other ill effects. His piece is aptly titled “The Malodorous Shrub That Launched Kauai’s Pesticide Wars.” As Jan points out:

In November 2006, students and staff at Waimea Canyon Middle School complained of a bad smell that made them nauseous and left them with throat irritation, watery eyes and dizziness. Many attributed it to agricultural spraying on a field next to the school.

The incident continues to be attributed by opponents of Hawaii’s seed industry to pesticide spraying, even though the initial field investigations by police, fire and independent botanical experts said it was stinkweed, a finding that was confirmed by a University of Hawaii study.
This is one of the lies repeatedly told by Kauai Councilman Gary Hooser, Center for Food Safety and crappy journalists like Paul Koberstein and Chris Pala — that Waimea school kids got sick from ag pesticides, when in fact, Syngenta hadn't even sprayed those fields when the incident occurred.

Through their intentional misrepresentations, driven by their desire to stick it to the seed companies, they've drilled that bit of folklore into people's heads.

In reality, there has never been one case in the entire state of seed company pesticides causing school kids to get sick or be evacuated.

Though Jan's well-written and well-researched piece should help to set the record straight, as we all know, it's so much harder to dispel bullshit than it is to spread it.

And on that note, I'll leave you with this photo of contrails — not chemtrails — taken one chilly dusk at Cornell. 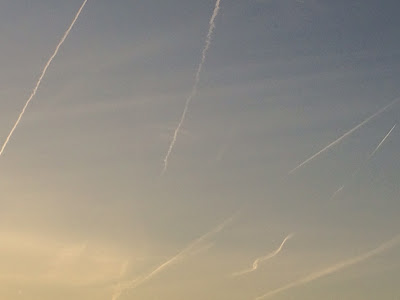 How does the Cool-Aid taste?

I don't know. I never touch the stuff.

I call it a waste of precious time. Or it may be time for you to go back inside and have a beer with Sasquatch and watch reruns of X-files.

Sellout. Must feel good to be surrounded by people who like you. It is good that you have new friends. Your old ones left a long time ago.

Though I have made a lot of new friends, I haven't lost any old ones. But since you obviously aren't in either category, you wouldn't know.

Joan has many friends on Kauai... Going back a long long time. The silent majority believes in science, courage and reason.

It sounds like a fascinating and wide-world perspective you experienced on your research trip! If only anti-GMO activists did half as much thoughtful investigation we'd have a much more well informed public. Thank you for taking the time to do the homework that so many don't seem to want to.

The do a lot of spraying for mosquitos in Manhattan.
There are lawsuits about over spraying of pesticides in parks there too.

3:05 said "Must feel good to be surrounded by people who like you."

She is here! In fact, we love her! Without a doubt she has many more friends than your uneducated self, 3:05.

Anyone can file a BS lawsuit. It's winning that takes some education and facts both of which I'm sure you lack, 7:46. You can refill your pipe now.

Joan, Since you seem to toss chemtrails into the conspiracy bag, I wonder what kind of research you have done to warrant such a conclusion? Just the smallest amount of time researching the issue of geo-engineering brings up so many articles, photos and interviews that it becomes very difficult to discredit them all. An open and rational mind is needed when approaching this topic. To disregard it as a conspiracy theory without in-depth investigation may not be the most intelligent approach.

Have a good trip Ms Joan.
Thank you for your blog.
Why is it this one thing? The GMO thing has made discussion so difficult? Why has it created enemies? GMOs and Ag are but one part of the Kauai society.
Civil discourse is best,
But, it is a shame that you, who have done much for many Kauai issues and were the darling of many, has to bear the brunt and actual venom from people you dared to disagree?
The Fistees and you probably agree on most other issues. Beach access, no TVRs, Hawaiian issues, balanced budget, honesty in government etc.
One lady and a pen, turned the full over-growed Hoos into a sniveling little lying girl. And got all of his Fistifier's bikini thonged undies tied into tight little bunches. Tight li'l Fistees.
No offense to the little girls, but for a full growed man-type to act like one is not a good thing.
Peace be with Joan. You have been the nemesis of many of my types over the years, but we never attacked you personally or questioned your ethics.
In the end we will all be judged by our integrity and honesty. You are a truth seeker.
How will the Fistees stand up in the midst of their hysterical, hyperbolics? How will Da Hoos stand up with his litany of lies and grandstanding antics?
God is watching and Heaven's gate looms.

People living in Manhattan have a 300% lower carbon footprint than people living on Kauai.

JFK Jr. was investigating chem trails before he died.

You mean there are actual people who believe in Chemtrails? Imagine that.
Psssst. Move to Manhattan. Aloha.

Yes, 9:17, there are "actual people" who believe in "chemtrails"; they are the intellectual heirs to the Melananesian Cargo Cultists. Chemtrail Cultists revel in strange ritualistic beliefs in the notion that their poor understanding of certain events and their related rantings have meaning beyond their own group of the scientifically challenged. The dumber they are, the more certain they are of their half-baked beliefs. Aloha 'oe.

Do you "believe" that the technology to create clouds does not exist ? Most people "believe" in gods that they can not prove exist

Chem-trail believers haven't been around ever since mankind crawled out of the ocean. They;re the new Chicken Littles.

Who said the sky is falling ?

Aren't clouds chemical? Some stay up there for a while. They make great a backdrop for rainbows. Where does rain come from if not for clouds?