I awoke, still tired, as the sky barely brightened, and my first tendency was to roll over, go back to sleep, but I knew the planets were out there, up there, and I had to see them, which I did, brilliant against the blue-black of the pre-dawn east, arrayed today in a diagonal line, an arrow with sparkling Venus as its tip; then Mars, a faint red dot; the smoldering white coal of Jupiter, and at the bottom, the moon, slim sliver of light cupping the dark of the whole.

Stars spattered the sky, taking my thoughts back to The Martian, the film I watched last night. It was unique in its celebration of intelligence, of science, as a stranded astronaut — Matt Damon — uses his vast knowledge of math and science to make water, grow food, generate power, build shelters, survive.
It had no product placements, save for NASA and Jet Propulsion Labs, and ended with a hopeful scenario: the U.S. and China cooperating on a mission to explore the “final frontier.” So is space exploration ultimately a unifying tool? Because out there, neighborhoods and nations, race and religion, become meaningless; Earthling is the only demographic designation that matters.

Though it had all the markings of a Hollywood blockbuster — soaring score, dramatic tension, masterful special effects, plucky hero, happy ending — it departed from the norm in delivering a message that was consistent and clear: Without math and science, you're dead.

It also slipped in some not-so-subtle commentary on the food and energy issues that currently plague the planet.

For instance, after the Matt Damon character deliberately digs up the spacecraft's ditched radioisotope thermoelectric generator — “the big box of plutonium” — knowing it could kill him, but desperate for heat, he notes:

And sure, I could choose to think about the fact that I'm warm because I have a decaying radioactive isotope riding right behind me. But right now I got bigger problems on my hands.

When he returns to Earth, and a career as a survival instructor, he begins by telling the young astronaut hopefuls:

Yes, I did in fact survive on a deserted planet by farming in my own shit. Yes, it's actually worse than it sounds. So, let's not talk about that ever again.

His point is obvious: Yes, the ancient ways of farming did work, and still will in a pinch. But there's more than one reason why people stopped collecting “night soil” and applying it to their fields, so let's stop idealizing traditional agriculture.

At another place in the movie, he observes:

They said that once you grow crops somewhere, you officially "colonized" it. So, technically, I colonized Mars.

It made me think about the natural process of colonization in which seeds, carried by birds, drifting on ocean currents, floating on the wind, take hold in different surroundings, sometimes dominating, crowding out, that which was already there, cross-breeding, perhaps, ultimately evolving to adapt to the conditions of the new environment.

It's a process that's repeated as well by animals of all kinds (of which are one) — sometimes with devastating consequences. Yet it's part of the seemingly inevitable, and unceasing, mixing of life that fosters the genetic diversity that is the hallmark of a healthy species, a healthy ecosystem. Life, in all its many forms, is an unending work in progress.

The hero goes on tell his students:

And if you solve enough problems, you get to come home.

Though we forget it most of the time, this blue-green sphere we call home is traveling in space. At various times in its history, cataclysmic events have taken place. And once again, it seems that in so many ways, everything is going south. 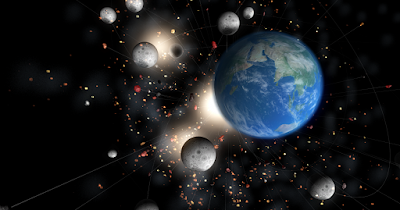 Can we problem-solve our way out of it?

Do we have any other choice?

Because we aren't going back; we're somehow going forward.

While many seem to relish the notion of a postmodern apocalypse, with its enforced simplicity, I've studied enough history, seen enough poor rural communities, to disabuse myself of the romanticism of eking out an existence. Homo sapiens have striven always to go beyond mere survival.

Yes, we need to know, understand and honor the ways of the past, the building blocks of our survival. But we can't turn our back on science, silence the scientists, allow the fearful and ignorant to define a conversation they aren't equipped to lead.

Because at this point in our evolution as a species, it does seem quite literally true: Without math and science, we're dead.
Posted by Joan Conrow at 9:00 AM

“You must have chaos within you to give birth to a dancing star.”
“The man of knowledge must be able not only to love his enemies but also to hate his friends.”
“All things are subject to interpretation. Whichever interpretation prevails at a given time is a function of power and not truth.”
“A thought, even a possibility, can shatter and transform us.”
― all above quotes --Friedrich Nietzsche

“Everything that is done in this world is done by hope.”
― Martin Luther
"I invented the internet"
-Al Gore....an ardent anti-Gmo enthusiast


Welp it is a good day to aspire to great things. I think I'll do the math on how many new County employees we can hire with the built-in logarithmic ratios inherent in our Kauai property taxes and ponder on the futility of the long barking dog.
Joan Conrow, you are a spark. Thank you.

Joan, you've stepped into the unknown future that people don't want to face. Our bodies need to learn to live in the environment we are creating. The pollution that won't instantly go away, has become so bad that the air we breathe is dangerous. Our bodies will learn to live with that and science will help to develop ways to fight it or make it better. In the meantime, some bodies will survive and others will not. So, live life to it's fullest and do good whenever you can.

Nothing is organic anymore. Who are we kidding. Even humans are multi bred with many blood types. Humans need to accept we live and die.

Thank you so very much for your post. I'm reminded of Carl Sagan.

We need more of math and science and less of ignorance, superstition and fairytales that divide us.

We may die due to suppression and censorship of scientific data by the government, heads of companies, the "big Boys" whose ego, greed and power rule their days!

10:09am,
You are more likely to choke on your bullshit first.

10:09---what bullshit? better get to reading and listening to the news---big boy bullshit everyday and more to come--lies and deception---what is hidden will soon be revealed, oops, some stuff already being revealed---do your homework---

So 6:26pm you have never heard of cigarette companies and the big truth that they were selling you for decades?

I believe it's the same concept that 10:09am is correlating towards.

As I recall, 11:41, the scientific data and studies were overwhelming in the case of cigarettes. So I do not find a scientific equivalency between the known harms of tobacco smoke and the perception of some people of the harmfulness of the Kauai seed company operations. These perceptions are so far unsupported by the available health data and the great preponderance of pesticide studies in the public domain despite what some people say. I will, just to make you happy, grant you that I see a moral equivalency between the activities of many of the principal anti GMO agitators with other self aggrandizing people who do dubious things for self promotion or financial gain (like cigarette company executives).