Activism 101: Before you call for an action, make sure you've got the bodies to support it.

The People Over Profits rally staged at yesterday's opening of the Hawaii Legislature drew a crowd of perhaps 200 that steadily dwindled as speakers took the stage. 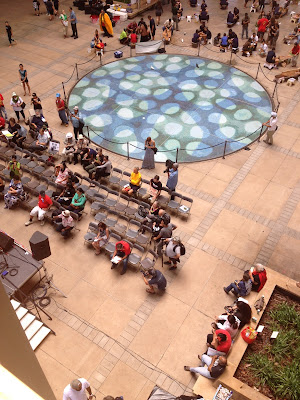 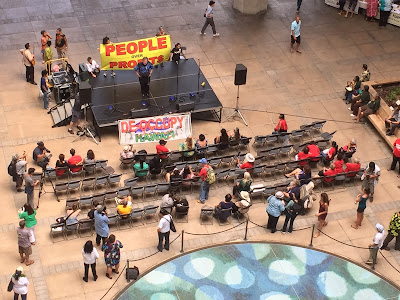 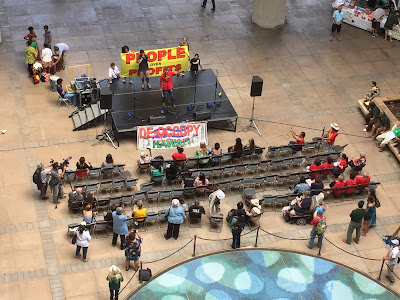 And bored with Walter Ritte.

Meanwhile, four floors up and worlds away from the tired old Shame banner hanging from the railing of the Capitol rotunda,  Sen. President Ron Kouchi — the Kauai politician who got Gary's job when he made an unsuccessful bid for Congress — was the center of attention.

I wonder who had the better day?
Posted by Joan Conrow at 8:50 AM

As much as this may be wishful thinking, I can't imagine that, by now, people--at least on Kauai--have grown tired of the relentless fear-mongering and anti-science drumbeat and returned to recognition that the economy, traffic congestion, health care, education and other bread and butter issues are what matter. Mr. Hooser has milked this for a great deal of political advantage, but enough is enough. As to the legislative session, it's time to, once again, expose the anti-Ag, anti-GMO, anti-science onslaught of bills for what it is: counterproductive for Hawaii, counterproductive for Kauai and counterproductive for logic and science.

Clearly truth does not matter to you Joan. During course of the event there were hundreds of people who attended and participated. You could have chosen another picture that was taken during the peak of attendance but you of course did not.

Who always has the best day at the legislature? The lobbyists.


9:30. Oh good grief! Thie photos accurately represent the crowd when Gary and Walter spoke. I said it started with about 200. You're not interested in "truth," only your narrow perspective.

@ 9:03am Majority of the crowd was not there for their rally. they were more interested in the poi pounding demonstration. The hundreds you speak of were probably at that point when people were waiting in line to sit in the house and senate galleries. and that's the truth.

Am thinking the purpose is to garner media attention that keeps their message on the table, more than to actually convince anyone in attendance. So, would say that in this regard the rally was modestly successful.

WTF? They didn't get media coverage.

Was some coverage in newspapers and civil beat plus images of those awful banners have a way of showing up all through the year. Last years hazmat suit photos have appeared in publications all over the world in stories about this ongoing controversy in Hawaii. Have heard, this is going to be the next front the antis will be opening up, attacking the holy grail of tourism.

The "activism" conducted in public settings can't match having two US Supreme Court justices speaking at political fundraisers for effectiveness. Yes, the anti-gmo movement gets money from trust funders, but let's not kid ourselves about who wields real power and influence in our political system.

Activists should focus on the dilemma facing Hawaii: our main industry is contributing to the destruction of the very thing that tourists come to enjoy.

So true, Allan. And this anti-ism has been so counterproductive for the health and welfare of local families.

There wasn't coverage in Civil Beat or anywhere else.

these rallies are traditional for opening day Walter Ritte has been fighting for his people there since 1971 while most here hide behind comp screens and are just opinionated Trumpster sno birds who know zero about anything just bloviating and pontificating. I learned those words here. Happy hour must be in full swing among the oldsters set. Rock on. 1950 is calling and wants its cool back.

If the anti-everythingers come out against Hawaii's of control dependence on tourism, we will finally have something to agree on. CHARGE !

that fight has been going on here for a long time obviously ur a newbie most that oppose large corporate takeovers of Hawaii like Walter were at the forefront of the battle but that was before your time. People like you think activism in this state only started after blogging caught on. Or after u came to visit on the same tin bird as the bloggers did. It's a pretty wannabee statement 458

Sorry Ms Joan...wrong post...Good Morning
And then back to the "lobby bill" Da Hoos introduced.
Most of the power for change on Kauai comes from FORMER County workers.
All development is handled by Mr Belles-former County Attorney, Mr Youn-former County Planning Director, Mr Chung former Senator...and Mr Kouchi, who in his brief hiatus from elected office worked for Kauai Lagoons and FIXED and uploaded their density. And many others.

But the complex part is that the above mentioned people are paragons of virtue and honesty. Smart and caring. Good ethical people.

Da Hoos is the only politician who has no power or influence from his former comrades. He is pissed off by the lack of respect and influence given him from the Senate and others he has touched thru the years in his powerful positions. This really really hurts his jiggly feelings.
Maybe honesty, integrity and virtue do stand for something after all.
Thus the lobby Law. If he gots no power..no one gets no power.

5:56 bwahaha! Good one. I spit out my juice when I read your comment.

Belles was the mouthpiece for those Coco Palms buyers. A lot of promises and the place is still the same.

AP: LANSING, Mich. — A top aide to Michigan’s governor referred to people raising questions about the quality of Flint’s water as an “anti-everything group.” Other critics were accused of turning complaints about water into a “political football.” And worrisome findings about lead by a concerned pediatrician were dismissed as “data,” in quotes.

That's the danger of crying wolf so many times. When it's a real problem, it's not taken seriously.

Attendance peaked when they trotted out the charter school students being indoctrinated in Hawaii Revisionist History. Can't believe we spend taxpayer kala on that shibai.

The people of Flint weren't crying wolf. It was racism.

I wasn't implying that the people in Flint were crying wolf.