It's pretty easy to rally support when you're pitting them poor little east Maui taro farmers against big bad A&B and its “theft of native water rights.”

Which is why the Senate Water, Land and Ag (WLA) committee yesterday deferred SB 3001. The bill would have allowed entities that have existing month-to-month revocable water leases — and have applied for long-term leases — to continue operating under a holdover permit while the pending disposition of water rights is settled, even if that takes more than the one year specified by law.

Though bill opponents are gleefully chortling about sticking it to A&B, they seem to have forgotten the many small farmers, ranchers and even homeowners who will be adversely affected when the overdue revocable water permits are yanked.

KIUC rate payers also could be impacted, since the two diversions that support the utility's upper and lower Waiahi hydroelectric plants are managed under revocable permits. KIUC noted in its testimony that it applied for a long-term lease in 2004.

Yet that application is still pending, 12 years later, because the state functions as slow as molasses. So what are short-term permit holders to do in the interim? Nothing involving water is resolved within a year in Hawaii, especially when every decision is subjected to litigation.

Indeed, it was a Hawaii Circuit Court decision that invalidated the present diversion of Maui streams on the grounds that the holdover status of the permits exceed the applicable time limit.

As an aside, I find it humorous that activists applaud the courts as “upholding justice” when they issue a decision like this. But when they rule against the anti-GMO initiatives, groups like Babes Against Biotech launch personal attacks against judges on social media, deriding them as unethical stooges in the pay of corporations.

There's no question that the revocable permit system for land and water needs some serious revamping, both to protect the environment and traditional uses, and also to give farmers and ranchers a level of security that will allow them to invest the time and money that's required to succeed. But something has to be done to protect the little guys while it's being hashed out.

A&B has private wells and ample financial resources to weather this storm. Small farmers and ranchers do not. They're being thrown under the bus in the drive to wrest water away from A&B. It's the same short-term, vindictive thinking that has people going after the seed companies, without a thought as to what will happen to agriculture and that land if they disappear.

Well, some people have given it more than a thought.... 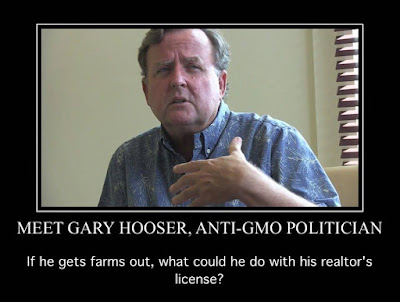 While this has been billed as supporting east Maui taro farmers, I wonder if taro production actually will increase with the allocation of more water. We've seen a drop in taro farming on Kauai because it's hard work, for not much dough. It's hard to imagine the dynamics are any different on Maui, given the associated economic pressures of the gentrification that's occurring in Keanae and Hana.

The contorted belief systems around these complex issues were expressed in this bit of testimony from a woman living on Hawaiian Homelands in Anahola:

Yeah, go figure. Because I sure as hell can't follow this logic, which does not factor in how much water the visitor industry uses, nor the fact that most of the food is being produced by small farms that depend on the irrigation systems and diversions that began with sugar.

In a similar disconnect, anti-GMO activists repeatedly reference the lack of human feeding studies to bolster their claims that GMO foods are unsafe. Yet attempts to conduct human feeding studies on a banana fortified with Vitamin A were met with serious blowback from University of Iowa students, who collected 57,309 petition signatures in opposition.

It's just like all the newbies and dreamers who are screaming for more local food, even as they repeatedly — and apparently, for some of these twits, unknowingly — screw over the small ranchers and farmers who are trying to produce it.

Which is why some of us see this anti-ag activism as merely the latest attempt to gain control of land and water, and thus power, in Hawaii. But given the fear-mongering, short-sightedness, self-serving agendas and ignorance of some of the major players, it's hard to imagine they'd be any better stewards than the Big 5.
Posted by Joan Conrow at 8:48 AM

Water and land issues are the reasons we need home rule. Home rule has lots of support.
Oooops.
After the Fistee takeover of the Council and how the County showed what "Home Rule" could become if left to a bunch of challenged Council people. There is NO chance that Counties will ever gain power over land or water uses, as long as the bizarre Kauai County behaviors are remembered.
Think of it. Mason "anointed" in a mob frenzy. Jay Furfaro loses all control as Chairman. Bynum's many tizzy fits. Da Hoos grandstanding. JoAnn's recklessness.
That Council destroyed any chance of County rule.
The Council that forever damged any possibilities for Home Rule.
The State knows that local politicians may not have the depth or breadth to handle real issues.
If we get rid of JoAnn, Da Hoos and Mason.....the County may be able to show our State masters that Kauai really can make sensible decisions.
Right now, Kauai is remembered as bunch of rich loud mouth hippies who threatened people, acted poorly and chanted really bad, really bad chants. Maybe if they did KumByYa we'd be better off. Lot's of hate.

So now that Coco Palms can NOT possibly finish demo by the the HARD DATE set by Council, blaming it on "lender difficulties", WILL THE LENDER lend with an outstanding planning violation (actually an evacuation of ALL permits)? No way. Lets watch and see how the Planning Dept over reaches on Council law.
Watching the Realtors mumble bad explanations is embarrassing. This is simple. The County bent over backwards, gave the developer the KY and didn't even ask them to be gentle, the developer took everything and did NOT perform. HE didn't even fix the broken dust screen or clean up the hideous trash and overgrowth by Kuhio...not ONE thing has been done by the developer to fix the eyesore. Even simple hundred dollar ambient trash clean ups..
The County and Mike Dahlig have been hornswallered by a couple of slick relators, who only want to get the permits and Flip the property.
And not one person asked the developer....will y'all get the money since the April date will put you out of compliance...out of permit? The oldest flim-flam trick in history. Bait and switch. Blame others and lie. The County makes all regular local people obey the law...now lets see what they do to a couple of real greedy realators? Guarenz, these multi-millionaires will bring back the world's greatest attorneys and make a whole new slew of promises...............cancel these guys out. They are not men of their word. Developers of the worst kind. Did not honor ONE agreement. Not one.

Home Rule vs. State Rule. I would trust the State Rule because it is determined by the Senate and the House of Representatives. These are the people we elect into office. 51 plus 25 = 76 minds of State Rule vs. 7 minds of Home Rule. It is far more democratic with the 76 minds than the 7 minds. Think about it.

9;48 PLEASE remember that Kagawa, Rapozo, Kualii and Kaneshiro have the upper hand right now! You don't agree with the other three, I guess---so, go get the four to do what you want done----even if nothing has been done thus far with those four in the majority! You keep blaming Yukimura, Hooser and Chock for what they (in your mind) stand for, but you gotta get on the other 4 to get what you believe is best for our county---they seem to be in your ball park, get them to hit home runs for you!

Nice picture of the big fist!

Yes, maybe you can blow it up and place it over your bed, oh ye who worships at the altar of the "big fist."

Yeah that CoCo Palms. Mo bettah let the thieves go in and steal the copper and other precious metals. At least they are more sincere about recycling and reuse than the developers. At least the money they get for selling that copper and crap goes to sustain their lifestyles. Maybe mostly drugs and booze, but some food. Lessens the welfare a bit.

Bynum...Bynum...Bynum... That's all you hear from that scrub. While he hasn't been in office for the last 2 years; what has this current council done??? Nothing!!!! Why do they get a free pass??? These jokers are clowns in office. Almost 200 million in county budget Year after year for almost 10 years and what we get??? Nothing but speculations and full of shit promises. Wha has the Mayor and his admin done? What has this council done? Have they done anything that they've promised to have done with each election? Nothing but more of their family and friends getting jobs creating more traffic going to Lihue to collect their county welfare checks.

Puhi Road is done! Well...not really. Maybe another year or two. What a bunch of clowns.

Yes! It's an exact analogy of Obama blaming his ineptitude on Bush.

Na, the welfare is for food and the thieving for drugs.

Yeah blame the person who is cleaning the mess the other person made.

It's like blaming the janitor for cleaning the shit off the toilet that a councilman left behind.

Who sells the drugs to the thieves?

Repaved after the GE tax is approved after the first term of the new Mayor so he/she can get their second term then repeat after 8 years. Same old story over and over again and again.

Said the guy who supports Trump for president and will be deported as soon as Trump is in office.

Bush's ineptitude was obvious to anyone who paid attention. Invade the wrong country and destabilize the Middle East, run the economy into the ground, mishandle hurricane relief efforts, etc. You really needed Obama to tell you that Bush was a screw up?