Dustin Barca , the anti-GMO activist and defeated Kauai mayoral candidate, was arrested Tuesday night for driving under the influence and having an open container in his car.

But he didn't get charged with DWI because his breath test was reportedly just within the legal limits.

Drinking while driving. Gee, such a great role model for the keiki.

So often it seems the same people who are loudly proclaiming we're being poisoned by pesticides and GMOs are engaged themselves in unhealthy habits. Dustin was observed smoking cigarettes, and now drinking while driving. And his anti-GMO cronies, Gary Hooser, Fern Rosensteil and Malia Chun, are packing a lot of extra weight, which is a well-documented health risk.

Is it too much to ask that they work on their own issues before telling the rest of us how to live and what to worry about?

Of course, nothing freaks them out more than seeing ag workers in hazmat suits. Though as  the Iowa Meets Maui blog notes, in this case it's an organic farmer, applying a "natural soap spray." 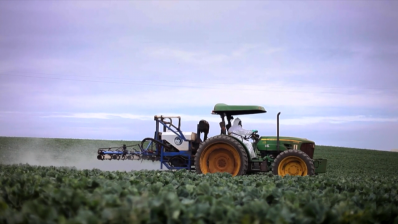 So often it's about fears, rather than facts, as this meme makes clear: 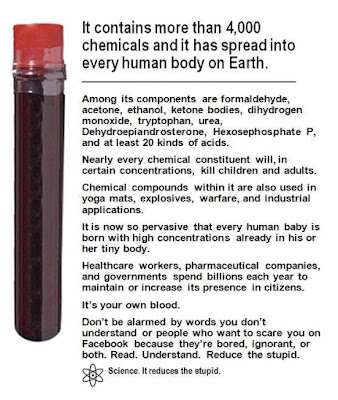 Meanwhile, the local paper carried stories this week of a guy caught trying to steal a safe on a skateboard, and another guy driving crazy on Kuhio Highway. One look at their mug shots tells you all you need to know about their state-of-mind and motivation: tweakers.

Crystal meth is a toxic substance that is clearly harming people on Kauai right now, destroying lives, families, fortunes, bodies and souls. Yet the self-proclaimed health watchdogs totally ignore that known deadly toxin, and instead focus on the bogeyman of possible low-level pesticide exposure. But then, there's a lot more money to be had fear-mongering about GMOs than helping people kick the shit.

Speaking of toxins, nothing pulls out the haters and crybabies like a post on illegal vacation rentals, and last week's piece on the Wainiha B&B contested case hearing was no exception. But the rigorous reality of a hearing may have had an effect on other homestay hopefuls, with one applicant — Realtor Susan Gailey — withdrawing and two more saying they were going to, though they haven't yet submitted formal letters. When it comes down to it, not everybody wants to show their tax returns and be subjected to intensive questioning.

And finally, remember this? 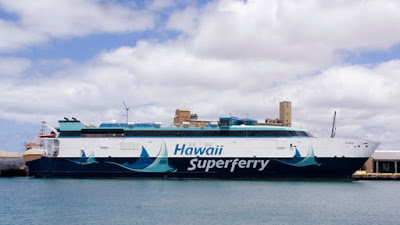 Yes, the Hawaii Superferry, obtained by the U.S. Navy and renamed USNS Puerto Rico, has moved to the East Coast.  Under a lease agreement with the Navy, it will become the new high-speed ferry to run between Maine and Nova Scotia, starting this summer.

Proving the adage “one man's meat is another man's poison.”
Posted by Joan Conrow at 1:31 PM

I'd love to see what Barcas hashtags are going to say now! You should see his latest chemtrail IG post. They actually almost connect the dots but are to ignorant to to realize. Fucking clowns

Years ago I tried to tell you all that the Mexican drug cartels were buying real estate on Kauai. They even had a drug front store that shipped in meth and now you see them all around Kauai driving low rider Chrysler 300's and Big trucks while they have their tatted up gang bangers walking the track.

What dirty pigs have connections to this power grab?

The 2 TSA females that were retaliated against on Kauai and state of Hawaii, probably identified meth mules and security violations. Yes the cartels have people working the airport, tsa, and the mail delivery services.

Is anyone keeping tabs on the biggest way to import meth? It's where cocaine flies. Father and son been in the game for so long that DEA busted them twice and still they run drugs in shipping containers.

Regarding meth and tweakers, Joan, what is your take on this article regarding Iwamoto getting 1 year for possession of over 15g IN ADDITION to his history of crime? Would like to get perspective from the Prosecutor AND his opponent. Could you do that? Address the amount of plea deals regarding serious drug AND property crimes? It doesn't sound like justice was served just because Iwamoto had an epiphany while in jail he shouldn't be doing meth so give him 1 year...could you do a piece on that? would be fitting since campaign season is upon us,.

For 1 gram and below:

*studies have shown that 95% of meth users relapse within the first few days to a year.

4th strike Life in prison because 35 years wasn't enough for the perp to learn.

Anyone caught with an ounce or more should do mandatory 20 years to life, with no parole.

Let's see the protected drug dealing families deal with that. Instead of them destroying families and the people of Kauai and the state of Hawaii.

3:38 Prison is not the way to deal with drug addicts.

@ Joan, ya, but in Iwamotos case he was already in the system for multiple issues so this shows his behavior is escalating. You honestly think only 1 year or even drug court would help him?

I'm not talking about Iwamoto and I know nothing about his case. I was referencing the Draconian proposed 3 strikes rule for a gram or less.

Drug programs have repeatedly failed and the Meth/drug problems are deeply rooted to families of the have and have nots.

Why hasn't the Mayor built the drug facility on Kauai? Because many of the half way houses would lose federal, state and county funding.

The proposed site of Isenberg would have shutdown more than a handful of half way houses and that's the real reason that they relocated the site.

It's been almost 10 years and this Mayor and administration and council hasn't done a damn thing.

Maybe all the drug profits goes to those families that have top positions on Kauai and that's the real reason nothing has been done by the county of Kauai.

@joan. I see, apologies. Would be interesting though to get both Prosecutor and opponent opinions on plea deals. statistics would be good too from prosecutor

This news about Dustin "rainbow warrior" is not a surprise. Hopefully he will learn his lesson and not drink and drive putting others in danger. If I were Gary and Mason I would be sorry I ever politically aligned with Dustin. Birds of a feather flock together. Huge mistake! And after yesterday's atrocities at council they're political careers will probably come to an end soon. It will be a welcome change come November.

4:11, I attended public meetings on the Isenberg proposal. Residents were overwhelmingly against it. NIMBY. Some brave souls stood up and said the people who were afraid of having addicts in treatment nearby were closing their eyes to addicts in their own families and already in the neighborhood - and not receiving treatment. Similar complaints were made in Hanamaulu.

The Mayor can't wave a wand and create the treatment center. He's tried to keep the process moving, but as recently as last Wednesday some Council members were throwing up more roadblocks and demonstrating their basic ignorance about the project and about the steps required to create it.

Personally, I'd rather the County didn't take this on. The County isn't equipped to create and successfully manage a residential treatment program for adolescents. It's the state's obligation, and the money would be better spent on suing DOH to do its job and provide care for our residents. And by providing care, I don't mean shipping children to Oahu or the mainland for programs, making it extremely difficult for family members to participate in programs - an important step for successful recovery.

I suspect that if the prior ten years and a bunch of wasted money were spend on getting DOH off its okole and opening a treatment program here, we'd be further along than we are now.

Seven-pound ice bust on Kauai and not an eyebrow raised. JFFG report released and it's in the paper for days.

Prison is the way to deal with ice dealers,forever or perhaps even execution.
As for users, they are extremely dangerous and invariably thieves. I don't think one in 20 never goes back. I know of exactly one case of a younger person not going back. I do not trust them in a home. They need mandatory treatment in a secure facility away from the public and monitoring for years after.
Then there is the Oxy problem. Almost as bad. The fool in government that allowed this class of drugs ever to be made available outside a hospital must be corrupt to the core. However this is treatable and we have some doctors here on Kauai that have done incredibly well in this regard.

@7:40 pm - what atrocities happened at the Council?

No!!!! There's another Dr Sian Evans and Shapiro Brothers pain clinic brewing on the south shore of Kauai.

It's going to get bad before it gets better so keep tabs on this new pain clinic in Koloa.

Barca: not only is he just below the legal limits(wink, wink..... Good ole boy network) but he had the audacity to actually drive with an open container. Moronic behavior. No surprise though.

Joan, I'm missing the logic here. If no one who is overweight can warn people about food-related issues, then no one who smokes can tell anyone how dangerous smoking is, and a drug addict can't tell someone not to mess with drugs. If someone is addicted to sugar, are they automatically disqualified from trying to keep their children away from it? Pointing out someone's weight, or overall health seems like a cheap shot to discredit someone, instead of addressing the lack of merit in their views.

Haven't I done enough to undermine the merits of their arguments?

Another role model, Nomi Carmona, the self-proclaimed Babe Against Biotech, smokes cigarettes but screams about the imaginary health impacts of gmo food. Why do some people look up to these egotistical whinIng hypocrites who are ruining our communities?
How did Hawaii get so screwed up?

2:41PM, You quibble with distressingly regular frequency. What's the point of addressing the lack of merit in their views. Macbeth said it best:
" it is a tale
Told by an idiot, full of sound and fury,
Signifying nothing."

Most of us have been guilty of behavior that we later regretted. None of us is perfect. One thing that Dustin has is compassion. This admirable quality seems to be severely lacking in many bloggers and commenters these days.

Jane Goodall is passionately opposed to GMO's. We should check to see if she is height\weight proportionate before listening to her point of view.

No, you should check whether Jane actually knows anything about biotechnology.

Great, if she doesn't, i'll let you know and you can rip her for being out of shape.

I didn't "rip" anyone for being out of shape. I merely pointed out the hypocrisy of three seriously overweight individuals sounding the fear alarm about what they perceive as health hazards in the community.