Nothing frightens an anti-ag activist more than farmers discussing farming: 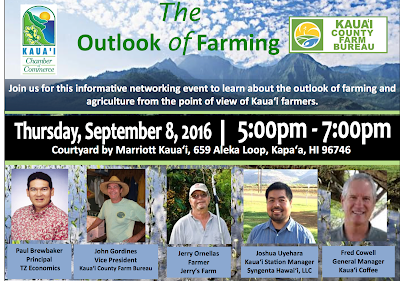 Why? Because it points out just how stinking intolerant and ignorant the activists are: 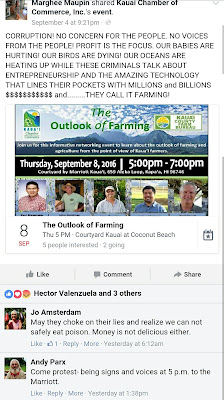 Oh, yeah. These local boys be raking in millions and billions. What a fricking joke. Meanwhile, I'm quite sure Marghee ain't working for free, and her hubby, Pat Gegen, hasn't turned back his pay from KIUC, either.  It seems profits are only bad when earned by others. 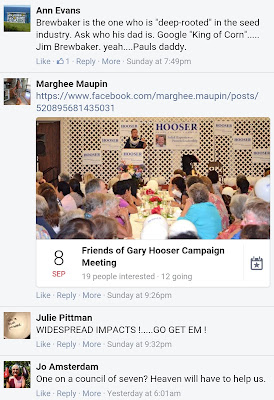 These people are so ignorant they don't even recognize the difference between conventional hybrids and genetically engineered crops. But then, they're Hooser people, so what do you expect? 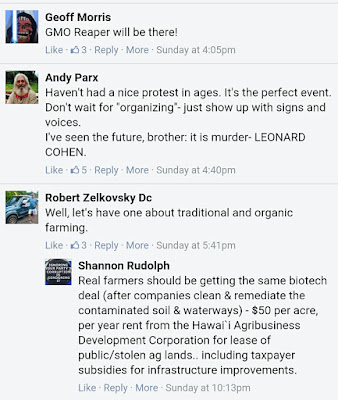 Yo, Zelkovsky. You've got all that Surfrider money. Go ahead and organize your own presentation.  Nobody's stopping you.

And what does Shannon, or any of these jokers, know about "real farmers?" None of them have farmed a day in their lives.

As for Andy, I've seen the future, too. It's crowded with hungry people — people that you and your deluded cohorts want to deprive of technology and choice.

It seems the only thing worse than farmers talking about farming is the prospect of yet another horrid ag byproduct:

Oh, yeah. They scream for diversified farming. They yell for local food and green energy. But when it comes right down to it, they're against all forms of modern agriculture because it's too "dirty" and "industrial."

Of course, that doesn't stop their "leaders," people like Ashley Lukens and the supposedly breathing-impaired Terez Amato Lyndsey, from sucking up the clean dust at Burning Man: 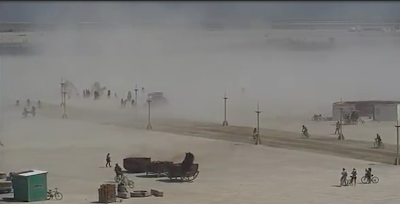 I recently saw a letter to the editor from David Dinner, bemoaning "gridlock in Kapaa, overuse of Hanalei, Haena and Ke’e Beach, the development of the dairy, waste management and the poisoning of our coral reefs by pesticides and other chemicals. We must vote with intelligence. We must elect those who will help to unite us."

Ironically, Dinner supports Hooser, the most divisive and polarizing politician I've encountered in my 28 years of covering Kauai politics. So his "vote with intelligence" exhortation is pretty much out the window. Still, Dinner does make a good point:

Beyond the voting issue, we need to get our neighborhoods talking with one another. We must discuss our needs and commonality. This island is in the middle of a weaponless war that is painful to witness and unless we start to listen to one another, no election will solve our problems."

So why are the antis so afraid to let people who actually know what they're talking about, talk?

Because there's an awful lot of dough, drama, egoism and narcissism involved in letting the war continue.
Posted by Joan Conrow at 1:02 PM

Showing what these people think, in their own words, tells it all.

Thank you for sharing their destructive and pathetic, no-aloha agenda.

They should all have to eat only what they grow.

If people had to only eat what they grew or butchered the world would stave.

Farming is difficult work; it requires much planning and patience. Farming to feed masses, even tougher. we will soon have over 8 billion people in the world. Without science to assist production we will starve.

It is just so hip to spew non-gmo and organics.

They should focus on the real problem, climate change and air pollution.

in the olden days, the land was free. Maybe Gary's buddies at Hawaii Life want to stop selling land and give it away. the conversation about growing our food depends on it. oh and we can all stop working(yippy ) , no need for money here on fantasy island, the land is free, we can all take to the land, put that spade in, plant some kale and praise Hi Life. Reverse the Mahele.

We can all agree to disagree on issues. It is not our culture on Kauai to discuss a subject where hate and ugly behavior is encouraged. Take that energy inward and remember as a parent or a person of character in our community, if the actions suggested in the emails shared by Joan, is what you can be proud of or support. These men love Agriculture...and they are sharing their life's work to educate and celebrate their accomplishments for others to consider a lifestyle in GROWING Hawaii. It will take every phase of Agriculture to feed, clothe, and protect our world's food supply.

Ms Joan- Andy Parx? Is that waste of space still around? Andy has been getting welfare hand-outs courtesy of the taxpayer forever. He's been on Kauai for years and never worked a day of it. Paradise Found.
Da Hoos gets all of the attention, but lest we forget yakity-yak Yukimura and Moron Mason are juicy lubricants in the Fistee thrust.
These three...anti-Ag, anti-Housing, anti-Roads, anti-Jobs.

I wonder if Da Hoos will picket and sign wave as advocated by his mentor, Andy? Naw, he is keeping his head down during the election. Da Hoos would be scared to even attend this event.
David Dinner recommending "neighborhoods talking with one another" is a great idea, except these super-rich ho-dads don't got no respect for the poor local folks. These NS as*holes try the ol' Noblesse Oblige method.. NS elitists in their self-aggrandizement "with wealth comes responsibility" would serve the island better if they would just shut-up.
Or maybe David Dinner could take some of his social responsibility and give Andy Parx some kala and take him off of the welfare rolls.
Total respect for the group hosting the Farm event. These are also nice guys.

Marghee Maupin, Jo Amsterdam, Andy Parx, Geoff Morris...? really?!
@ 6:23PM - "It is not our culture on Kauai to discuss a subject where hate and ugly behavior is encouraged."

Well i'm a life long resident here, i can tell that the culture on Kauai is definitely changing, unfortunately not necessarily for the better. just by the comments of these four, you can see the 'fucked up attitude' of 'we know best and must save the island'.

first things first, get Hooser out of council, then the silent anti-(anti-gmo) majority will really send a message to the anti's.

How the hell are we allowing Pat Gegan to be elected for the KIUC board? If he ran for Council, he would be last place, no doubt, what a joke!

Seeing that picture with that guy called Geoff Morris the GMO reaper just makes my skin crawl. Is that the guy who dresses up as the grim reaper to scare people into being against GMO? I think I saw a picture of him protesting at the state capital. Still that kind of thing disgusts me. Manipulating people through their emotions is pretty messed up. Maybe we can get Scooby and the gang over to take his mask off and expose him once and for all.

Andy Parx identified that the Kauai serial killer was back on island when the murders happened on the east side of Kauai just like the west side years prior.

Norma Sparks has the education background and work related experience that should hold Dept heads accountable.

I'm voting for Norma Sparks for her credentials. She should actually be the Mayor of Kauai with all of her career accomplishments.

No, Andy reported a rumor that turned out to be false.

If we are to survive with sustainability, we need more people to grow food. To be protesting against the "farmers" is insane. What have you offered or brought to the table to eat? Jack Shit. You grumble but don't have a solution.

These "farmers" should be heard instead of ridiculed. Let us live in Peace. Give up your hate game. If you don't like the food here.. Git.

I have a 17 year old blind and deaf German Shorthair Pointer. I've watched her bury hundreds of avocados in the woods over the years. The woods abutting my property is full of avocado trees dropping more avocados then I know what to do with. Some I sell to the restaurants and food trucks, some get picked up by a hippie and sold at farmers market, some get eaten by my chickens and ducks, some my family eats, some I give away to friends, and some get picked up by my blind and deaf dog and get buried in the woods. Most, though, just rot away in the woods. My dog grows more food than most people on this island and she doesn't need fertilizer, chemicals, or even water (other than rain) to do it.

"If people had to only eat what they grew or butchered the world would stave.

Farming is difficult work; it requires much planning and patience. Farming to feed masses, even tougher. we will soon have over 8 billion people in the world. Without science to assist production we will starve.

It is just so hip to spew non-gmo and organics.

They should focus on the real problem, climate change and air pollution."

maybe,jus'maybe, the real problem is too many people?

Whatever the rumors; the murders were suspicious and similar to the west side unsolved serial killer murders.

12:32, Your four footed farming pooch is probably the leading permaculturalist on Kauai- she has a great work ethic and a truly sustainable farming operation that produces more food than the bullying Center For Food Safety could ever produce even in in their fevered Burning Man dreams. I'll bet she has a really nice glossy coat.

@12:32 pm
I don't doubt that your dog grows food but I doubt its more than all the farmers on Kauai. Did you do a heacount of the trees?

Kauai has clearly gone off the deep end. It's tragic. These are good hard working people that get vilified by fools rather than celebrated for the positive difference they make in ag. This industry is "one cloth" being torn unnecessarily by fools who take pride in beating down good people yet produce little or nothing on their own. I have pity for the reasonable people on Kauai who have to deal with all this spite day i and day out.

The world's messed up but it's not my doing. Okay, I fly here and there and eat red meat and drive a car and watch sports on TV and go to places with air conditioning and buy stuff made or grown thousands of miles away, but other than that, I'm carbon neutral and don't feed the military, petroleum industrial complex that is the real problem. But not me.

Why don't you ask the dog how many trees she's grown.

These people are getting on my nerves.

9:27PM - You are not the only one. Don't let them win. These people are purely want to bes. All they do is cheer each other on and blow smoke up each others ass. They talk a lot. They physically can not work. It is a psychological disorder. The no work syndrome. We are probably supporting these people via grants in aid or food stamps. So cheer up and do not these nervy get on your nerves.

To kill toxic bacteria, composting dog poop is a necessary first step if you want to fertilize your garden with it.
By John Jeavons and Robin Leler
September/October 1984

@ 5:16 PM - This is what is so fucked up about you antis. You take what someone says and twist it into something else. Can't you read, idiot? 12:32 PM said, "My dog grows more food than most people on this island...." Meaning more than any single person; not all the farmers combined. God, what an illiterate twit you are!

“I love the truth. It's the facts I'm not a fan of.”
― Stephen Colbert