Musings: Another Day in Paradise

Out walking the beach behind Coconut Markeplace, in that time between night and dawn. All the hotel pools are lit up, though it's Newell's shearwater season, and the pre-dawn, post-dusk times are when they're the most vulnerable to light attraction. And why the hell do they need to illuminate their pools all night, anyway?

On the beach, tourists stand and sit, cameras in hand, waiting to record the birth of the sun, but in the meantime, they're watching the sleek black head of a monk seal, bobbing as it traverses the shoreline, in shallow water, looking to come ashore.

When it does, it's rushed by the tourists, intent on recording the event. It takes one look at the throng, turns around and flees toward the sea. You guys, I tell the tourists, it's trying to come ashore so it can rest, and now you've scared it off. It's actually illegal to approach the seals.

They give me the 'fuck you' look and I trudge on, morning walk ruined now by the growling in my head, the seal well ahead of me, attempting once again to land, only to meet the same fate, and then I see it heading out to deeper waters.

The feral cats, meanwhile, are lining up near the oceanfront units, obviously accustomed to hand outs.

So where is the education, the enforcement? Where are the environmental groups?

Oh, they're busy trying to take down fishing and farming, which they have deemed some huge threat. Kauai Sierra Club's Judy Dalton is advocating for trap-neuter-release and feral cat colonies, though certainly she must know they prey on native birds, like the shoreline nesting wedgetails, and the taxoplasmosis in their doo-doo has killed monk seals.

Over on Oahu, Sierra Club director Marti Townsend is protesting against the hiring practices of the longline fishing fleet, taking a slightly different tack than the unceasing lawsuits filed by its lawfirm, Earthjustice, but all working toward a common goal: destroy the fishing industry. She's quoted as saying:

“It’s really about strict regulations and third party oversight. Everything that’s happening on these boats is legal. It’s just immoral.”

If the Hawaii Sierra Club is so worried about morality, why has it aligned with fear-mongerers and liars, like the Hawaii Center for Food Safety, Gary Hooser's HAPA (of which Marti's hubby, Ikaika, is a board member) and dishonest people like the University of Hawaii's Hector Valenzuela, who is using his job and public funds to rally against GMOs?

I am not an anti-GMO person, and I have never served as a spokesman for any anti-GMO group.

Yeah, it's just a coincidence that he shows up at all the anti-GMO rallies. Like, as the GLP points out, a protest organized by Occupy Monsanto, in which he addressed the crowd.vGLP continues:

Valenzuela also appears to be actively engaged with Babes Against Biotech, plastering their posters on his office door.

And even as Hector whines and moans about the ongoing harassment and intimidation supposedly directed at him — while never actually filing a formal grievance — it turns out Hector had compiled (using his UH email account) a 32-page dossier on Kevin Folta, the University of Florida horticulture chair and science educator. GLP reports:

Much of the information was cherry-picked from comments made by Folta on social media and blog posts going back several years. GMO Free USA appears to have used a lot of Valenzuela’s information to create memes encouraging its followers to harass Folta. Quite often notes appear to have been taken verbatim from Valenzuela’s dossier and posted to GMO Free USA without disclosure.

In the classic hypocrtical style of the antis, they even called on the University of Florida to fire Folta, using a made-up allegation and branding him a liar: 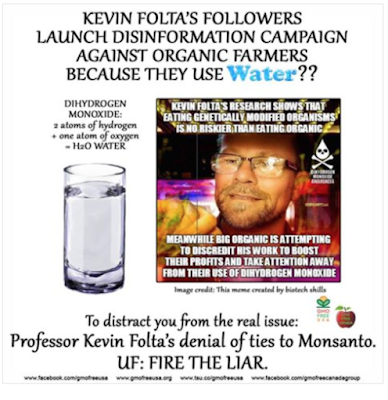 And call the university, they did. According to Fusion.net, “the university was so inundated with requests to fire Folta that it changed his office number and asked the FBI’s Domestic Terrorism Task Force to remain on alert.”

The harassment did not stop at just complaints to his university. The blog Skeptical Raptor described how ruthless some of these people were. In one email that Folta received, the writer described the location of where the Professor’s wife liked to bike, terrorizing her enough to become afraid of staying home alone. They even went to Craigslist:

One of the most vile personal attacks was from some cowardly and anonymous Craigslist poster who invoked Dr. Folta’s deceased mother to attack Folta’s reputation. And used childish and ridiculous language like calling him a “Monsanto whore.”

He can’t take on science in the spirit of acceptable scholarship, so he gets in line with vile activists to defame legitimate scientists. I heard him on the radio on Kauai. I could not believe I was hearing someone claiming to represent a Land Grant University and a science-based perspective. He was pushing claims we know are not supported by evidence.

Yet somehow Marti and the Sierra Club and Earthjustice and Hawaii Center for Food Safety have drawn a line that places themselves among the “vile activists” — with their lies, intimidation, fear-mongering and overheated rhetoric — on the side of morality, and the fishing fleet and conventional farmers among the immoral.

I still don't get it.

While we're talking about the self-proclaimed moralists and Messiahs: 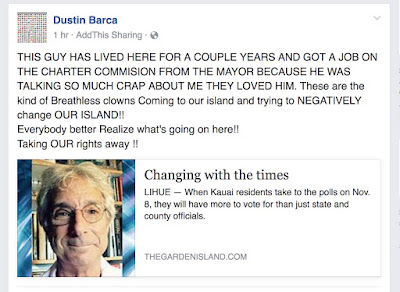 But it ain't what Dustin thinks.


Ah. Just another day in paradise.
Posted by Joan Conrow at 8:27 AM

Das right! sanctify the scientist you agree with and demonize those you don't and call yourself objective. It's the activists who are violent despite corporate misdeeds from the Pinkerton's beating up Wobblies to GM spying on Nader, Mcdonald's spying and sleeping with members of London Greenpeace and Chiquita Banana killing union organizers in south America and environmentalists being executed in Honduras, Volkswagen poisoning everyone with toxic emissions, yet somehow anyone associated with Pro-GMO research is a saint. What makes you think these GMO corporations are different than any of the other bad actors? I know they are "public sector scientists - in a honest and good faith way." Folta the Saint and martyr and Hector the lying demon from hell!

Joan "But it ain't what Dustin thinks." No? Does the name Gary Baldwin ring a bell?

Baldwin's charges were reduced to a misdemeanor and he is now working as a consultant for the Economic Development Alliance of Hawaii, a federation of the economic development boards of the state's four counties. A great man of the people.

Actually, 9:06, I was talking specifically about the anti-GMO activists in Hawaii and two public sector scientists — Hector and Folta — not the entire history of corporate misdeeds and activism in the world.

I’d feel a little more comfortable about the technology if it wasn’t being developed by the same folks who brought us Agent Orange and dioxin. It’s kind of hard to believe these guys when they say, “trust us, GMOs are completely safe.”

9:06 Is the composite of a paranoid ranting anti filled with a lopsided view of history and justice.. . Sorry to break this to you Norma Jean, but I don't think anybody cares about GM sending spies to watch Ralph Nader or if McDonalds supposedly sent gigalos in to infiltrate and shag London Greenpeace babes against Big Macs. And anywhere else except on Kauai, nobody is angered about Pioneer or Syngenta making genetically modified pest and drought resistant seeds. Apparently, Zuckenbergs' beautiful lava rock wall blocking a small part of the view from a Koolau Road was the much larger non story that put Kauai in the world spotlight this year, thanks to our celebrity obsessed culture.

And they own pharmaceutical companies that keep on raise prices at an astronomical rate which in turn raises co-payments and also insurance coverage costs but now insurances are cutting formularies to not cover the drugs altogether.

GREED is a CANCER.

ummm.... @10:04 agent orange was developed by the Federal Government and several chemical companies were FORCED to produce the product. The former Monsanto was one of those companies, even though they objected over safety concerns. http://www.monsanto.com/newsviews/pages/agent-orange-background-monsanto-involvement.aspx http://www.fas.org/sgp/crs/row/RL34761.pdf

Speaking of vile activists has anyone heard anything about the destruction of property that occurred on one of the mauka diversions? I believe it was the waikoko/bluehole intake. They took a concrete saw and jackhammer to the wall. It's ironic because that water is used to run KIUCs hydro stations. After the hydros a small portion is diverted into a ditch which feeds a drinking water plant and many many small farms kalo included. The majority of the water makes its way back into the Wailua river. At one point much of the water was used by various seed companies but they've pulled out of that area for close to a year now. So basically they're messing with our ability to move Kauai towards sustainable energy (which is something I'm sure they claim to want) and hurting the small farms (which is something I know they want) and also messing with our drinking water which everyone needs! I hear the Fed's may be getting involved. Hopefully they pop these fucking clowns for domestic terrorism

@10:04 You might want to amble on over to Gary’s website and make a donation to his campaign so he can stay in the battle.

9:42 Thank you. Gary Baldwin was a strong advocate for businesses and individuals.
He helped many people. Gary, if you read this blog, please hear this.....you are missed by many. Kauai is a better island because of you. The many people you helped are grateful. You have changed lives for the better.

Gary Baldwin is a crook, no need for that man here. And 8:25, speak for yourself, not the island

Please don't vote to make the Charter Commission permanent. We do not need another set of overlords intermeddling every two years with pet agendas. Shut them down.