Musings: What It Is

One of the best things — perhaps the only good thing — to come out of the presidential campaign has been a renewed focus on how women are treated and viewed in America.

That's easy. Far more women can relate to the denigrating experience of dealing with a man's unwanted sexual advances than the political affairs of another nation. And then, of course, there's America's fascination with anything sexual.

I've seen many women use social media, opinion pieces, radio interviews and other venues to share their own stories of being groped, fondled, kissed, grabbed, and otherwise sexually assaulted by strangers and familiars. It's invariably an upsetting, degrading, frightening and humiliating experience. 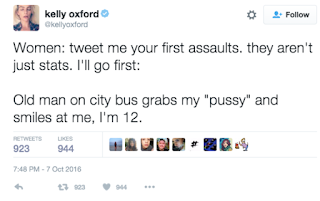 And though it's centered around sexual actions — and in the case of Trump, minimized as run of the mill “locker room talk” — it's really not about sex at all. Nor is it about how “hot” a woman may or may not be.

It's about power and control — the same dynamics at play in domestic violence. When men make unwanted sexual advances toward a woman, and she is unable, for whatever reason, to denounce or stop it, the man gains power over her, and thus control. Which is why it's a tactic so often used in the workplace and other professional settings, as well as against young girls.

If the woman speaks up, she risks making a scene, drawing attention to herself, getting fired or demoted, or being scrutinized for her own supposed culpability. If she says nothing, the man knows he has secured the power and control he seeks, and he moves on to other victims.


It's only by talking about this behavior openly — identifying and condemning it for what it really is — that we can free women from this burden and help their reclaim their own power.
Posted by Joan Conrow at 9:10 AM

Joan -And then, of course, there's America's fascination with anything sexual.

Judging by the world's over population it is far more than just "America's fascination with anything sexual".

Absolutely we need to keep talking about this. I'm already seeing a slight decrease in the usual sexual harassment I am exposed to daily at work. Just yesterday a man I work with made an inappropriate comment about women and another man teased him for acting like Trump. I'd say that's a baby step in the right direction.

@9:55 Judging by the world's over population it is far more than just "America's fascination with anything sexual".

That's easy. Far more women can relate to the denigrating experience of dealing with a man's unwanted sexual advances than the political affairs of another nation."

You are implying women are stupid as many of their husband's and son's died because of Hillary's hawkish foreign policy. Seems that would be of far more concern than an inappropriate comment.

They still have girlie posters up where I work. I'm afraid to complain, but why do I gotta look at half naked women leaning sexual on cars all day? Bet they don't like if I put up a big schlong poster in the hall.

FWIW: a column that supports the need for sex education.

10:41: Clinton didn't make that foreign policy all on her own. In any case, the question is hardly about "inappropriate comments" anyway.

IMHO, It is men like Trump who are stupid because they allow themselves to be lead around by their dicks fearing that "some boy" may call them a pussy. Pretty much grade school stuff.

@10:56. Wrong again. I have no problem with people criticizing what I write. There is a difference between criticism and criticism couched within a personal ad hominem attack, which is your typical MO. But thank you for confirming your bonafide troll status.

Although I too have experienced unwanted sexual advances, I believe this issue was brought up as a huge distraction, a red herring, from the REAL issues of this campaign! The video of Trump and alleged assaults are disturbing and I do not condone that kind of behavior, IF THEY HAPPENED. What I do not understand is why the majority of the media outlets are not focusing on Hillary's ACTUAL, PROVEN crimes: ILLEGAL, PROVEN violation of national security protocols via her private server endangering our national security, deletion of thousands of emails after a subpeona by Congress, lying under oath, etc. Benghazi and letting our ambassador and 3 others die: how can any State department employee, military person and others ever go into harm's way with a commander in chief who doesn't have your back? It will be totally demoralizing to our military and others if Hillary is elected. Allowing unvetted, illegal immigrants into our country who may be ISIS operatives, etc., etc. Hillary is VERY dangerous and will destroy our Republic as we know it. And by the way, I am a white, college plus educated woman and I'm voting for Trump, the lessor of two evils.

@11:05 Clinton didn't make that foreign policy all on her own. No she had help from a murmuration of hawks but she was Sec of State.

@9:55
Most of the overpopulation comes from Africa, China and India since they don't use condoms and reproduce a lot. Especially in Africa.

Joan: can women be their own worst enemy when it comes to sexuality? Do many judge themselves alone and other women by what they look like or how they dress? how many times have you heard a women say she dresses for herself or other women not for men?


By the way any sexual assault or abuse is unwarranted under any circumstances. I'm not blaming victims. Women do and should control their own sexuality at least in free countries

It's obvious that 11:17 doesn't understand the dynamics of politics and the law. The FBI investigated and can not find enough evidence to indicate that there is something to prosecute, doesn't that tell you something? Same if a prosecutor tries to convict someone with little or no evidence, if any prosecutor feels that there is not enough evidence then they don't pursue conviction. That's how the criminal system works. So you are saying she is guilty, or guilty until proven innocent. Ah, I think you got it backwards.

As for Trump, its not criminal but a moral issue. And you don't need to present evidence because he confessed thorugh a non-refutable recording incriminating himself.

If you can't see the difference, then I suggest just drink the kool-aid and take a long nap.

If u voted for Bill Clinton the second time then what Trump 'said' shouldn't bother u in the least.

on the flip side, ive heard women say and do some nasty shit to other women and men, at least equal to what guys say but more conniving. reminds me of a line from a song "she likes to have things her way, any man in the room giving her his arm, will soon be made to pay" so true. it goes both ways.

1:03 PM said "As for Trump, its not criminal but a moral issue. And you don't need to present evidence because he confessed thorugh a non-refutable recording incriminating himself."

I've listened to the tape recording and Trump said nothing incriminating. It was merely male-to-male banter...i.e. bullshit. Anyone taking it seriously is merely using it for their own asinine politician purposes and should be ashamed of their actions. If you hold Trump to that talk then you MUST hold H. Clinton and her campaign staff and the new DNC chair to the down right corruption as revealed in the WikiLeaks emails. it matters not how they were gotten but that they are real. Get a life self-made victims.

you people are weird. Joan wrote a post that no one could disagree with yet here y'all are arguing about some shit. weirdos

Women talk like that all the time. Ask any high school or college girl.
Hypersentive media BS.

I disagree wit her "America's fascination with anything sexual " comment as if we are somehow the world's leading offenders. She herself has denigrated the Babes many times for exploiting their own sexuality.

@5:24. That's your interpretation. I was merely stating a fact. I was not comparing it to any other country. Why would that even be relevant when discussing an American response to an American election?

ive been inappropriatly touched and groped and some would consider raped by women when is was a younger man, and found out later that it was being bragged about. so its not just a male dominance thing, women do it too, altough i must say in all truthfulness that i didnt fight back too much on one occasion and weve been married for 34 years.

11:17 Trump bragged that he could sexually assault a woman and get away with it. Women confirmed it. What's in doubt? He bragged about it. Case closed.


I was a CA StateWorker at a Max security nut- house for the SVP/Sexually Violent Predators/ schyco killers---hey it was Cali... This job sucked! This job sucked real bad!! But business was good!

The good news was that these "patients" (all men ) were locked up and not a danger towards Women, Children, or anyone else. NOW a Very big ,, large Blackwoman supervisor at this shithole that outranked me and most everyone--- would do this too me(corner and establish her control) in front of incarcerated blackmen that pissed her off In the Yard or in the chow hall!!!

I am a big guy and could fend for myself with these killers,Multiple takedowns a day. So every single supervisor that looked the other way cause the racial element...(me white male, her Black female)... that observed this and did nothing--- thank ya very little! Goes for the union also.--- what cracks me up is that if it could happen too me - Yea , I can understand very well that situations are different for everyone and yes it is very much a control issue.

My only point is that of coarse it is more likely to happens towards women and children? And I'm not weak. She would wait for me at my car in the night parking lot and just go all rape mode!

I dare you to say I'm full of shit? This woman bragged to fellow workers that she "did me". You jackass - your gonna call "case closed"???

This is why anonymity is good sometimes!

Oh all these big strong men being sexually assaulted by women? Where is Joan now with all her scientific studies debunking all this crap? I'm sure she things women like the babes she despises bring it on themselves by using their sexuality to fight her sacred GMos. On need not be a man to be a sexists. I had one women tell me that "women these days" consider being grouped a compliment! Pure BS. It is the strong preying on the weak. That why Forrest Gump is a nice story but sadly far from reality.

1:58 And you never thought of bringing a baseball bat to defend yourself? You are FOS!

I may not be a smart man but I know what groping is.

1:58 you don't think Trump assaulted all those women? He may not be charged with a crime but he's guilty.

Hillary wasn't charged with a crime but she is guilty.

It's your duty to die for equality (what, you don't want equal rights?)