“The Millennials are finally getting involved in politics,” my brother-in-law said, referencing an article he'd just read. “Where have they been all this time?”

“Hanging out with their ear buds in and their hoodies pulled up,” my sister replied.

One Millennial — the misnamed "Babe" herself — was busily posting this on activist Facebook pages yesterday: 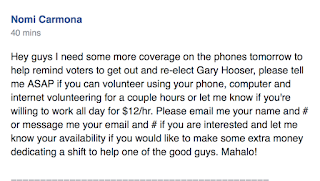 Aside from the fact that Hooser is hardly “one of the good guys,” where are the Babes getting the dough to pay phone bankers? And why is a Maui group organizing a “get out the vote” effort for a Kauai guy?

So much for the vaunted “home rule” the anti-GMO groups are always talking about.

But then, that's a total crock, anyway. Even as it advocates for “home rule,” the Hawaii Center for Food Safety Action Fund got nearly all its money from its Washington, D.C., headquarters and the fabulously wealthy Lavinia Currier, who owns a Molokai ranch, but lives in Virginia.

According to its late contributions/expenditures report, the PAC took in $15,000 from its D.C. office and $7,500 from Lavina in late October. It then spent $8,188.88 between Oct. 24 and Nov. 3 to buy ads pushing its “True Food” slate of candidates on Maui: Alika Atay, Napua Greig Nakasone, Elle Cochran, Trinette Furtado and Keani Rawlins- Fernandez.

In other words, a Washington, D.C. advocacy group and an east coast philanthropist picked up the $2,180.88 tab for this half-page Maui News ad claiming these four are all about "home rule:" 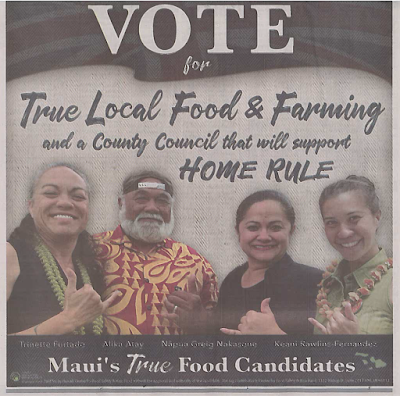 Can you spell hypocrites? Oh, wait, that's too hard for Alika. How about pawns? Chumps? Token Hawaiians? Sell-outs? Puppets?

Is it any surprise that CFS hasn't actually done anything to support farming in Hawaii? Its "true food" is as phony as its candidates.

Other big contributors — besides Lavinia, who earlier donated another $10,000 — include Honolulu's Randy Ching, who gave $5,000. The Maui-based Sustainable Action Fund for the Environment gave $1,000, as did Kilauea resident Rosalie Danbury, whose husband made a fortune figuring out how to create email spam. All the rest came from the D.C.-based CFS.

But aside from the candidate ads, the rest of the spending is rather hazy, in terms of which candidates benefitted. There was money going to CFS director Ashley Lukens for Facebook ads. Maui "Babes" Lauryn Rego and Nomi Carmona got $3,333 and $1,900, respectively, for "election consulting services." For the primary, the PAC spent $1,838 on a mailer for Tiare Lawrence and $2,522 on one for Fern Rosenstiel.

In the end, just $18,259, or less than half of its $40,097 total spending this year, has been accounted for. Where did the rest go? Which other candidates benefitted from this unreported largess?

I've been hearing the Lege is going to crack down on the opaque funding methods that activists use to conduct lobbying and election work, including money raised through go fund me and crowd funding sources.

Go for it.  CFS, with its politicized request for legislative emails — a bid that the Civil Beat Law Center supported — has been especially strident in its call for total transparency by elected officials. Let's see if it can stand to look in the mirror.

Meanwhile, here it is November and CFS has yet to file a 2015 tax return, keeping its doings in the dark until well past the election.
Posted by Joan Conrow at 8:16 AM

I've been working on campaigns for more than two decades. I've never been paid a penny for it. Never wanted to be paid. It's sad that this is the only way to bring "volunteers" out. Or maybe it's the only way to get people out to suppprt jokers like Daddy Hoos.

This is infuriating and depressing. I guess we'll see today if Mainland attorneys rule Hawaii.

All the buzz words that these master manipulators use are being created in Washington, D.C. office to hoodwink folks here:
"True Local Food and Farming" ???? What a joke. Who is a true farmer in that expensive half page Maui News Sunday advertisement?

In my 60+ years here, I have never seen such mean-spirited, disrespectful, conniving puppets with the audacity to believe they are prepared to manage Maui County.

Trinette: tries to portray herself as a successful entrepreneur, but on her own financial disclosure statement, claims she is unemployed, with no income except food stamps, alludes to MIT education but elsewhere claims she went UH, sues TRUE farmers to help put 700 of them out of business (she posted:
"2016 is the LAST SUGAR HARVEST!!!!! HC&S is CLOSING!!! #‎WeAreWinning‬!#‎PeoplePower‬#‎SlayingDragons‬)"

Alika: is he talking about the "farm" (just over ONE acre of disorganized mess) he managed (before being evicted) with his campaign manager...the place they wouldn't let officials come on to get rid of the FIRE ANTS that threaten to destroy Maui's way of life? Resorts to name calling at every opportunity--calls everyone a SCRUB.

Keani: ZERO experience, but she did just grad from law school. Laughs approvingly in a public forum as Alika calls her council opponent a SCRUB.

I don't know Napua well enough to comment, but the fact that she has aligned herself with these pretenders makes me cringe.

Hooser cannot simply but an election, no matter how much he and his fanatical followers try to do so. I think statewide all of these activist candidates are finding this out the hard way. Good riddance to radical socialism and these "my way or the highway" candidates.

You can watch Greg Palast's documentary: "http://www.gregpalast.com/bestdemocracymovie/" The Best Democracy Money can Buy" for free today. It covers the problems with electronic voting machines which other countries have rejected in favor of hand counted paper ballots. Election fraud is prevalent in the USA (vs "Voter Fraud" which Trump is complaining about).

P.S.
I tried using html anchors, the "preview" works, but when I try to publish it goes to an error page of some sort. It used to work.

ummm... Non profits are not to engage in politics. https://www.nolo.com/legal-encyclopedia/limits-political-campaigning-501c3-nonprofits-29982.html The IRS has rewards for turning them in: any takers?

There will be no women and no caucasians on the council. Real balance. Lets see if they can get us out of our road, housing, waste and food problems.

Can somebody please tell the guy from Nebraska to stfu? We have enough white people commenting we don't need his two cents

I appreciate and welcome the guy from Nebraska's comments. At least he knows WTF he's talking about, which is more than many who comment here, including you.

We just elected a racist rapist as our president!

I'm a small farmer and I know something about ag but I've learned more from Bradley Choquette's comments.

Hilary'so baggage was too much to overcome. Bernie or Elizabeth would have smoked the Donald.

I bet more than half the presidents in the history of the United States were racists rapist @7:31

It was the elite democratic parties fault. Good for that fuckers!

Hooser and KipuKai are out.

Wow. I thought Da Hoos had a shot with his 100k and phone callers. This clearly shows a resounding repudiation of all of the nonsensical harassment of the seed companies. I hope he will enjoy his career as a soon to be failed state house lobbyist.

Joanne's wonderful departed parents and all of their loyal friends pulled through for her yet again. She will be the crazy auntie in the attic this time around.

Thank you for all of your great writing Joan.

We would be screwed regardless of who we elect to the council. We just elected a creep who thinks going bankrupt is being a successful businessman, assaulting women is the norm and that Putin is admirable.

FYI I didn't support him.

but it's time to move on.
it will be what he will make of it, or not make of it.