In the Orwellian newspeak-doublespeak category, Edible Hawaiian Islands has conferred a “local food hero” award on the Hawaii Center for Food Safety.

That's quite a feat, considering that CFS has done zip to advance either local food production or food safety. Not to mention its fear-mongering, ignorance-fomenting activities are decidedly non-heroic. But since when do facts matter?

Once again, we are reminded that CFS represents less than 1% of the state's population, even if we accept its questionable claim of “nearly 11,000 members." Then there's the hogwash about how Hawaii folks “fund our work.” As I've previously reported, CFS receives more than 80 percent of its funding from mainland foundations, and what cash it does get most likely generates from there, too, since its headquartered in Washington, D.C.

But most intriguing is Ashley's admission that Hawaii CFS is first and foremost a lobbying entity. Which raises serious questions about how it can legally pass itself off as an educational 501(c)(3) public charity, while apparently violating the federal law that prohibits nonprofits from using foundation funds to engage in lobbying.

Which leads us to a partner organization of CFS — Gary Hooser's Hawaii Alliance for Progressive Action. It runs the Kuleana Academy, which claims:

Curious, then, to see the comment left by Russell Ruderman, the decidedly left-of-center and anti-GMO senator from the Big Island, on a Facebook post showcasing the spring crop of Kuleana Academy graduates: 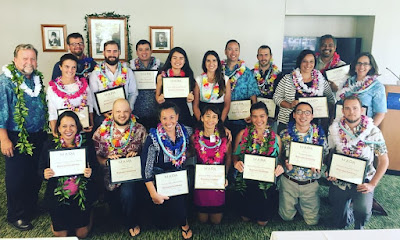 Send me some reinforcements? Meet you at the barricades? Phony revolutionary rhetoric aside, that doesn't sound very nonpartisan to me.

Others offering their congratulations were anti-GMO activists Ashley Lukens and Jeri Di Pietro, president of of Hawaii SEED, as well as Jonathan Scheuer, the state Land Use Commissioner who secretly taped a video of then-Big Island Mayor Billy Kenoi offering a drunken toast to Kauai Mayor Bernard Carvalho at a privately-hosted reception at the Hawaii Congress of Planning Officials.

It's ironic, then — considering how American anti-GMO activists idolize Europe — to learn the European Parliament is starting to cast a critical eye on where non-governmental organizations get their money, according to an article in Politico:

On March 27, the Parliament’s budgetary control committee discussed a proposal put forward by German center-right MEP Markus Pieper calling for the EU to cut public funding for NGOs “demonstrably disseminating untruths” or campaigning for “objectives [that are] contrary to the fundamental values of the European Union.”

Even MEPs close to the NGO community are advocating for more transparency about funding. “It’s legitimate to have sources of funding from rich individuals who have convictions, but it should be transparent,” said Green MEP Sven Giegold, who backed a proposal in the Parliament obliging NGOs, think tanks and trade associations on the EU’s transparency register to disclose who their donors are.

Gee, that might be something for the Hawaii Legislature to consider in its next session: a law requiring nonprofits to disclose their donors. The article continues:

Among the most vocal critics of NGOs like Corporate Europe Observatory are corporate lobbyists, who accuse them of pushing narrow political ideologies, rather than the public interest they claim to represent.

“Most [NGOS] are open about who is funding their work,” said Marco Mensink, the director general of CEFIC, the chemical industry association and one of the biggest spenders on lobbying in Brussels. “Regrettably, some others don’t practice the transparency they preach or comply with the letter and spirit of EU transparency laws.”

Far from representing the will of the people, some NGOs distort the public debate “with dubious arguments, often fake figures and by fear-mongering tactics,” said Markus Beyrer, the director general of BusinessEurope, the bloc’s largest business lobby. This “raises broad questions over their democratic legitimacy and representativeness,” he added.

Yes, as the lobbyists register and disclose their funding sources, the so-called public educational charities in America operate in a murky world of “invisible donors,” many of them very wealthy, who wield undue influence on local and national politics.

Not to mention that the lack of transparency makes it almost impossible to track where money is going and how it is spent. Which leads us to a recent real estate transaction involving a two-unit parcel across from Koloa School: 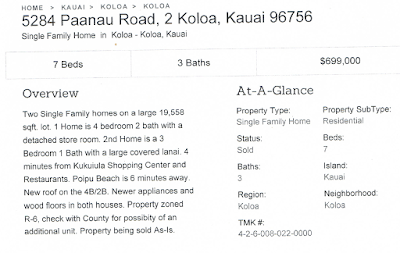 Curious, how a failed politician who ended his last campaign in the hole can afford an expensive piece of southside real estate, even though he still owns his house in Wailua Homesteads. It's even more curious when you consider he is currently not working, and instead claims to be serving in a solely "volunteer" capacity for HAPA.

Perhaps he's planning to go into the B&B or TVR business — both of which he vigorously defended, even on ag land — or build that possible third unit. Maybe he's adding to his inventory as a landlord. Or it could all be on the up-and-up.

But so long as Hooser has a reputation as a liar, and access to what is a essentially a slush fund of undisclosed funding and expenditures through HAPA, it raises questions — questions that could be answered with a bit of the transparency he is demanding from agricultural entities and others.
Posted by Joan Conrow at 7:14 AM

I haven't seen 2 houses for sale that cheap in a long time, looks like he may have got a special deal, look for the sale. That will sell for 2 million and put a hefty sum in his pocket when he resells.

Not that great of a property but yeah, where does he get the money.

Maybe he is going to farm--any updates about his agricultural exploits in Wailua? Didn't think so....

Looks like all those lunches at the level have added to the Hooserian heft. The anti GMO crowd must feed high on the hog

Wow to such revelations on the lobbying antics of certain self proclaimed non-profits, particularly CFC and HAPA.

The so-called Kuleana Aademy sounds very. bogus - is there anyone out there who happens to be a dropout of that program, with first hand experiences of what really goes on there?

Don't know how ubiquitous rat lung disease is on Kauai - is anyone doing a survey? Anything stopping CFS from doing it?

Non-partisan means not based in one political party. Does not mean they cannot promote a progressive perspective.

Rat Lung is this summers Zika. Fear mongering as a marketing tool to sell more chemicals.

It's nice to have a photo of the Kuleana graduates. I can assure you I will never vote for any candidate in attendance! It's like a who's-who of how NOT to vote.

About the Kuleana Academy: Is it still 'free' for participants? Has anyone ever been denied from entering? If they want to tout being unbiased and apolitical, their selection criteria should be public.

Yet Hooser still isn't registered as a lobbyist. Hmmm.

I'm curious as to why Hooser's new property was sold "as is." Of course it could be any number of reasons but does anyone with more real estate acumen know if some or all of the construction was unpermitted?

Surely Hooser wouldn't want to be involved in anything like that.

Wow at 10:59 AM who said "Rat Lung is this summers Zika. Fear mongering as a marketing tool to sell more chemicals."

You must have a few screws loose. I and others who are legitimately cautious about getting Rat Lungworm want to know everything we can do to prevent becoming ill from that disease. Why in the world would you risk death, paralysis, unbearable pain or other serious consequences when you can prevent it by controlling rats, snails, and slugs and thoroughly washing produce? Who's fear-mongering? The Department of Health? UH? No one is saying you must use chemical means.

Here's my story: I was a many-year participant in an upcountry Maui CSA. Every two weeks I would buy a large box of produce for my family from Kupa'a Farms, a highly touted "organic" farm.
I would spend the next several hours washing every single lettuce/kale/green onion, etc. leaf, making sure to get the DOZENS of snails and slugs, and associated slime off of the leaves. Then, a few years ago, I became aware of Rat Lungworm Disease and realized that it was just NOT worth the risk to buy produce from a farm that did not control for these vectors. There is no doubt in my mind that if RLD had been on Maui then, that I or my kids would have been victims.

I still buy local produce, but not from farms who brag about being organic and don't do anything to prevent contamination. Organic does not mean safe. In fact, I don't think it means anything.

I only buy food from people that brag about out using pesticides. It's mo betta

April 14, 2017 at 10:06 AM said "Non-partisan means not based in one political party. Does not mean they cannot promote a progressive perspective."

Merriam Webster defines partisan as " a firm adherent to a party, faction, cause, or person; especially :  one exhibiting blind, prejudiced, and unreasoning allegiance." It certainly fits Hooser and his band of HAPA wannabe's promoting what you call a "progressive perspective" that is mostly cherry-picked arrant bullshit. That's five Pinocchio's and a Chelsea Lyons Kent Finger for you.

Merriam Webster Definition of nonpartisan
: not partisan; especially : free from party affiliation, bias, or designation nonpartisan ballot a nonpartisan board

Except that people in Hawaii are already getting critically ill from Rat Lungworm. Ignorant.

Which federal law prevents the use of foundation money by nonprofits for lobbying?

A friend shared this link earlier today--I thought it might be a useful tool with the anti- and ignorant crowd. http://bigthink.com/neurobonkers/how-to-use-the-feynman-technique-to-identify-pseudoscience

Have a read and put it to work.

People who promote the progressive perspective know it is better to use stealth to promote it rather than keep such an delusional ideology in the open...

Lobbying Activity of Section 501(c)(3) Private Foundations
Private foundations that spend money on lobbying activity will incur an excise tax on those expenditures; this tax is so significant that it generally acts as a lobbying prohibition.
In addition, a private foundation does not qualify for section 501(c) (3) status if a substantial part of its activities is attempting to influence legislation (commonly referred to as lobbying). Legislation includes action by Congress, any state legislature, any local council, or similar governing body with respect to acts, bills, resolutions, or similar items (such as legislative confirmation of appointive office), or by the public in referendum, ballot initiative, constitutional amendment, or similar procedure.
A foundation will be regarded as attempting to influence legislation if it contacts, or urges members of the public to contact, members or employees of a legislative body for the purpose of proposing, supporting, or opposing legislation, or if the foundation advocates the adoption or rejection of legislation.

Are you sure CFS gives money to HAPA or are you just making shit up again?

@7:38 Yes, I'm certain. It was reported in tax returns. Unlike your pals in the anti movement, I don't make shit up.

Why don't you post a copy of the tax returns for us all to look at Joan!

@8:23. I previously did. Search this blog for HAPA or Center for Food Safety and you'll find it.