Andrea Brower, Katy Rose and Hale Mawae hung this banner with the state motto off the Superferry yesterday 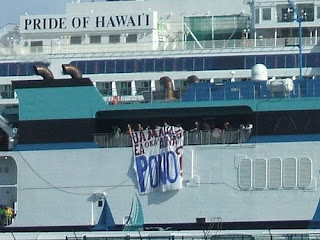 Mahalo to Andy Parx for forwarding Andrea Brower's account of the voyage:
Aloha kakou,
In a press interview today, Girabaldi urged protesters to ride the Superferry and experience all its wonders for themselves. Rather than having you all suffer through the same nauseating experience that I did, I will pass on my story of riding the Spooker-Ferry.
Katy Rose, Hale Mawae and I decided to ride the ferry in order to protest in solidarity with Maui and stage a peaceful banner drop while on board. We arrived at Honolulu Harbor at 5:30 am, and were greeted by 30-40 protesters (Mahalo Aunty Terri, Kyle, and everyone else who helped get people out so early). Upon check in, all three of us were informed that we had been "randomly" selected for full security searches (including pat-downs). To our knowledge, not one other person was searched. It seemed to us that as long as you hadn't been pre-identified as anti-superferry/ pro-aloha 'aina, you were allowed to walk right on with absolutely no screening.
Although every mainstream media outlet that I have seen so far claims that there were 200 passengers on board, all three of us counted somewhere between 50-70. Of these passengers, about half were affiliated with the media. We also suspect that of the remaining 30-40 "real" passengers, many were SF employee friends and family. One Oahu protester that we talked to observed that cars were actually driving in, pretending to drop off passengers, then driving out. HSF Corporation was obviously trying to stage a grander first day back in service than it could pull off.
I don't get sea sick. I love the feeling of rocking around to the motion of the waves--it usually puts me right to sleep. But I got sick. In fact, so did just about everybody on board. Every time I used the toilet there were remnants of someone else's breakfast. The place wreaked of puke. An old lady was lying on the floor of the women's bathroom. Every single person I talked to felt ill. One picture in the Honolulu Advertiser shows passengers sprawled out on the booth seats, supposedly taking nice naps. In actuality, we were keeled over in pain.
We all breathed a heavy sigh of relief when the ferry finally slowed down to enter Kahului Harbor. There were protesters in the water, on the beach, and stretched along the highway. Hale said a beautiful pule, and the three of us let down a 16 by 14 foot banner that read "ua mau ke ea o ka 'aina i ka PONO?" Maui protesters on the beach said that they could hear us chanting the state motto over and over, until Hale, so overcome with emotion, broke into tears. A ferry employee did force us to remove the banner, but he was kind about it. In fact, I should mention that all of the ferry employees treated us very warmly, even after we dropped the banner.
We met many beautiful people on Maui. I can thank the superferry for new friends on other islands, and for sparking a Hawai'i-wide movement to aloha 'aina.

Just got a report back from Katy, one of the Kauai people on board. She said as they got off the ship, Garabaldi went straight up to them saying that he feels that "things can be worked out in the community"....they just listened and only made one comment to him..."go get an EIS" ...but he continued talking AT them (it was a one-sided conversation). Katy just heard that Garabaldi is telling the press that he spoke with the Kauai protesters and everything is fine. She asked that people be aware that nothing was really said to Garabaldi. More from Kauai will be shared later.

for folks who would like to stay involved with the superferry resistance movement and help to organize future actions an upcoming gathering at the kapaa neighborhood center will be held on
*wednesday 12.19 @ 7pm
focused discussions on:
*community and capacity building
*inspiration model for alliance building
*preparations and organizing for future actions
*kauai beyond the superferry

please come listen and share
to help others and ourselves understand the issues and
create solutions and situations that will lead us to a more
just and sovereign community.

To see Hale, Andrea, and Katy in video action, copy over to the following link and skip ahead in the video to the 13:50 mark: