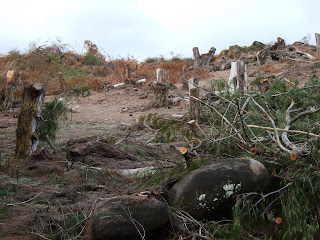 While walking to one of my favorite beaches, I encountered this scene of carnage on conservation land, down-slope from a house with the survey stakes that indicate a sale is possible or pending, and so the ocean view becomes even more valuable. It used to be an ironwood forest, filled with birdsong and shade. Now it’s rubble.

It reminded me of a piece I wrote earlier about this very same neighborhood:

All you want to do is make a lot of money, a big return on your investment, some major salad real quick, but you can’t do it in your own town, because the land is too expensive and the regulations are too strict, so you hop on a jet and touch down on Kauai, where you’ve heard the pickings are easy and sweet, and a realtor agrees, saying all you’ve gotta do is buy a chunk of ag land and chop it up into CPRs, but keep the best one for yourself and then decapitate all the trees, because buyers will pay extra for that coveted ocean view, so you do as you’re advised and grade a large pad to build a super-sized spec house that will soon bear a for sale sign and you pour a steep, concrete driveway that funnels all the drainage water from your lot onto the beach, eviscerating the clumps of naupaka that provide cover for the red clay that now bleeds onto the coarse, white sand with each and every rain until soon that stretch of coastline is scarred with small gullies, spoiled and stained, but you don’t notice because you’re someplace else.

All you want to do is go down to the sea, walk a rugged span of shoreline that’s relatively private and still feels real, wild, the way nature intended, without any traffic noise or visual intrusion of human habitation, where you can watch boobies fly and swim in clear, clean waters, but you can’t go anywhere in your own neighborhood, because the county forgot to record the beach access that’s now blocked with chain link, so you drive to another bit of Kauai you especially cherish and clamber down a steep path, among trees that have been felled, exposing the construction site of yet another garish mansion, across coarse, white sand that has been gouged and bloodied, and you feel again the hopelessness of the situation because you already called the deputy county engineer, who is a planner by training, but got his job because he’s good friends with the mayor, and he asked what you thought he was supposed to do about it, and then the state conservation guy, once he finally came and took a look, tried to convince you it was just an act of nature, and the kona winds carry not bird song, but the incessant beep-beep-beep of backhoes and excavators, and you notice, because you visit that stretch of coastline nearly every single day, and you grieve, because you don’t want to go someplace else.
Posted by Joan Conrow at 8:52 AM

I'm no tree hugger but that kind of disrespect for the land goes beyond ignorance.

my parents moved us from o'ahu in 1990. going back now to visit, it's heartbreaking to see the deterioration of the reef systems, forests, and old ways. can there ever be a balance?

I came across your blog while trying to find the current state of land development/environmental issues on Kaua'i (I currently live on Rarotonga in the Cook Islands, but am considering moving to Kaua'i for many reasons - none of which include wanting to live on an over-developed, over-Americanized island of convenience and condos...)

I am an artist and a writer as well and I admit that as I read the first few lines of your re-post I was a little irked. But as I read on, I realized that this isn't a poorly edited post of run-on sentences. It is poetry. Beautiful, moving poetry.

Wow, I have a lot of people write me about moving to Hawaii - but there are few that actually end up moving to Kauai. Most cannot handle the lack of things to do - at least that's what they offer as reason for not moving there, or moving away from the island.

Kauai is still a rather wild island, and I hope it stays that way as long as possible. Maybe the island's residents should get together and try to pass a "tree-houses only" law, so nobody can build on this lovely island any longer! Just a thought. Great post!

Liked the beginning poetry and the whole emotion in this piece. Well done.
I was born on Oahu in 1949. Air Force brat lookin' to get back.
My wife and I visited Kauai twice, in 1999 and again in 2000. The second time was a serious look for something a retired schoolteacher could afford. For 24 days we looked at homes, but we couldn't find anything around $250K with any privacy. Everything was up against a neighbor. Ran into a doctor at his retirement party who said he was moving to California so his dollar would stretch farther. That's when I gave up. LOL
You got a beautiful place there. Enjoy it every day. Mahalo

Mahalo for writing this run-on poem.
I was born on Oahu, an Air Force brat. We tried to find a place on my favorite island, Kauai, for around $250K, back in 2001, but couldn't find any privacy for that price. We may still end up there, if we have to pitch a tent on Tunnel's Beach. LOL
MikeUpchurch.com