Musings: Death of the Dailies

Watching the Rocky Mountain News bite the dust on Friday gave me a little pang, and not just because it was the latest in a string of quality old papers to close. It and the Denver Post were the papers I competed with, and even occasionally scooped, while working on my college paper, The Metropolitan.

One year we pulled off an April Fool’s prank, printing a faux Rocky Mountain News front page — the weather forecast was “hotter than hell” — with The Metropolitan tucked inside. We emptied a number of News dispensers around the campus in downtown Denver, and filled them with the doctored version of the paper.

It wasn’t long before one of the college deans paid a visit to our newsroom. But the News was a good sport about it, even complimenting us on our reportage and writing when it published a little story explaining the stunt to its readers.

Now it’s gone, along with the Kauai bureau of the Star-Bulletin, where I worked as the sole correspondent from 1994 to 1997 and got to do a bunch of cool stuff, like go to Midway and Niihau. The Maui and Big Island bureaus closed Friday, too, and I’m feeling for Rod Thompson, Gary Kubota and Tom Finnegan — reporters I’ve known for a long time, who are now without jobs.

As the Oahu dailies hunker down in Honolulu, the voices of Neighbor Islanders will grow even fainter, and our needs and interests will slip further from the consciousness of the decision-makers, money-distributors and power-brokers who congregate there.

But it's not just the dimming of the already distant planets that circle Honolulu’s sun that troubles me. It’s the loss of all that institutional memory. When a number of veteran journalists leave a paper all at once, especially those with specialized expertise, like Ken Kobayashi, the outstanding courts reporter who lost his beat at both the Bulletin and Advertiser, it loses some of its soul. Because it’s that memory that allows a reporter to pick up on the nuances of a situation, put things in context for the reader, make connections that might otherwise get loss — in short, give a story depth.

As I watch the diminishment and demise of daily printed newspapers, which are the foundation of my profession, I’m left wondering where the information biz is going from here. Surely some people still want access to real news and original reporting, the kind that unpaid bloggers and “citizen journalists” have neither the time nor skill to provide with much consistency.

Then I stumbled on a recent New Yorker article that delved into the last time the newspaper biz was in its death throes, and that was 1765, when Parliament levied the stamp tax on the colonies. In providing a bit of historical perspective, Jill Lepore writes:

Maybe if we knew more about the founding hacks, we’d have a better idea of what we will have lost when the last newspaper rolls off the presses. If the newspaper, at least as a thing printed on paper and delivered to your door, has a doomsday, it may be coming soon. Not so soon as weeks or months, but not so far off as decades, either. The end, apparently, really is near. That makes this a good time to ask: what was the beginning about?

And as she points out, it was about radicalism, speaking truth to power, even fomenting revolution:

Because early newspapers tended to take aim at people in power, they were sometimes called “paper bullets.” Newspapers have long done battle with the church and the state while courting the market. This game can get dangerous.

Early American newspapers tend to look like one long and uninterrupted invective, a ragged fleet of dung barges. In a way, they were. Plenty of that nose thumbing was mere gimmickry and gambolling. Some of it was capricious, and much of it was just plain malicious. But much of it was more. All that invective, taken together, really does add up to a long and revolutionary argument against tyranny, against arbitrary authority—against, that is, the rule of men above law.

You don’t mess with the men who work the presses. After all, the motto “Don’t Tread on Me” was made famous by a man who wanted his gravestone to read “B. Franklin Printer.

Some of those early printers went to jail, imprisoned under the Sedition Act, which made it a federal crime to defame the government of President John Adams. Others died disenchanted and destitute. Lapore continues:

To tell the story this way, as a struggle between tyranny and liberty … is to write a Whig history, something that historians generally sniff at, mainly because eighteenth-century Whigs (and Whig printers) saw their world in just this way, with themselves on the side of liberty, and people aren’t to be trusted in accounting for their own place in history. Whig history is suspect, in other words, for much the same reason that Benjamin Franklin’s autobiography is suspect. It’s too tidy. Most struggles, like most lives, are messier. Newspapers aren’t always on the side of liberty. Not everyone agrees on what liberty means. Some struggles never end. And it’s not the newspaper that’s forever at risk of dying and needing to be raised from the grave. It’s the freedom of the press.

Can that freedom be preserved, or even strengthened, in cyberspace? Maybe. But that doesn’t change the fact that gathering news, or even opinion, takes time, and in today’s world, just in the eighteenth century, time is money. As newspapers wither and die, it’s not the loss of the printed word that’s at stake, but the funds to pay folks to research and write them, day in and day out. And that’s what worries me.

Because in a capitalist society, some freedoms aren’t, and never have been, free. 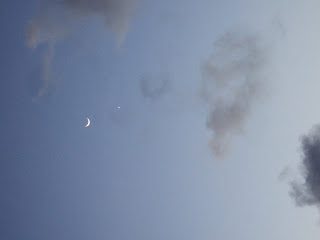 Finally, have you been catching the Venus-Moon show in the western sky the last couple of evenings?
Posted by Joan Conrow at 9:00 AM

But isn't there just a human imperative to speak out?

I don't wish to see the demise of newspapers, but those early papers, just like modern 'zines and blogs and whatnot, were political acts, not compelled by - or rewarded with - profit.

I agree that research and investigation takes time that most people just can't spare,and those doing that work should be supported, but I believe that as long as there are people on earth who fight for justice, there will be people uncovering stories and telling them, and people who will let their dissident voices be heard.

"Freedom of the press" and "freedom of speech" are not things to be granted by a government - they are things to be exercised by the people, no matter what.

Very few will miss it...

...and consider the remarkable quality, breath and depth of reporting that goes into this blog, and the author receives no paycheck for her troubles.

sorry i did not get that

the more citizens we have like him, the better off we will be

It used to be kinda trashy, but it turned around sharply and won 4 Pulitzers in the past eight years.

In fact "b.f." was many things -- some of them considerably less awesome than others.

The papers brought it upon themselves by not reporting in-depth, consistent, and thoroughly. Almost never can you get the complete story from a newspaper anymore. Here in Hawaii, none of the newspapers do complete reporting. The only periodical that even comes close but only on business and economic issues is Pacific Business News. Newspapers do not protect our freedoms anymore and have not for at least 70 and maybe 90 plus years.

Twitter is a three year old technology but is quickly replacing the TV 30 second soundbite from some blow-dried hairdo. A a text messaging cell phone is replacing a TV studio.
Here are a few sample tweets;
# georgettedeemerHB1747 deferred to end of calendar 3/2. That's the restructuring on income tax levels.12:48 AM Feb 28th from web

thanks im pretty well aware of b.f.'s less than great aspects. still, on the net, he did much good

"Newspapers do not protect our freedoms anymore and have not for at least 70 and maybe 90 plus years."

-- save for examples like watergate reporting or the vietnam papers etc. so the pre wwII papers were great stuff? anyways, the word "internet" seems to be missing from your post

wonder what the deleted posts said

The deleted posts, which were deleted by the author, not me, were just variations of what Ed eventually posted. Perhaps the comment function wasn't working well so he ended up with duplications that he wanted to delete.

thanks for the answer

> But isn't there just a human imperative to speak out? <

Yes. But in the case of newspapers, it seems to be losing to the corporate imperative to make money at any cost.

So papers are supposed to run at a loss or as a "non profit"?

Of course not. But before you come back with more strawman arguments, why not call up Rupert Murdoch and his pals and ask them what newspapers are supposed to do besides make money?

There seems to be some misunderstanding here. Both Honolulu dailies are run by companies that are in very deep financial trouble right now, trouble that is worsening by the day.

Both papers, for all their faults, provide almost all the reporting that matters in Hawaii, a state where political and government incompetence and corruption is extreme.

Both papers may be gone within a year. If not, they'll be little better than tabloid shoppers. That's the reality that people here seem not to understand.

"So papers are supposed to run at a loss or as a "non profit"?"

i defer to others that have looked into it, but i recall somehow that the profit margins on papers were historically pretty high / good, and in recent times they have dropped enough that owners were looking to sell

Besides making money, newspapers are supposed to report whatever news is "fit to print" in the eyes of the editorial staff and ownership, with their particular slant.

I've no problem with that. It's what I'd do.