Musings: Invasion of the Vacation Rentals 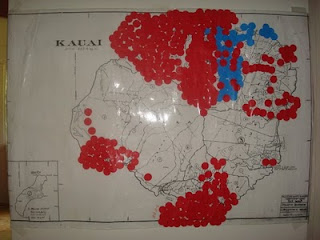 As this graphic shows (click to enlarge), there’s a very good reason why some folks are hoppin’ mad about vacation rentals. They’re all frickin’ over the place, especially on the North Shore.

The red dots represent the transient vacation rentals (TVRs) that have already been approved by the county, based on its own records. As you can see, there’s a sizable number in Kekaha and Lawai, but the biggest concentration is on the North Shore.

In fact, there are so many that Caren Diamond had to place dots on top of each other and run them out into the water and up Na Pali Coast in order to fit them all onto the map.

“I do want to do it over again with smaller dots,” she said. Actually, she may need to use a fine-tipped red pen.

No, the shocking fact is that these are all TVRs outside the visitor destination areas (VDA) where they are allowed. In other words, these are the TVRs that are not in the designated resort areas, but instead have turned residential neighbors into de facto resorts.

The blue dots represent TVRs on ag land that applied for permits, but have not yet been granted approval. They are the ones that would be allowed under the bill now before the Council.

And they do not, by any stretch of the imagination, represent all the TVRs currently operating on ag land. Many ag land TVR owners did not apply the last time around because the bill specifically excluded them. Why would you apply if you didn’t think you could get approved?

The bill pending before the Council will open the door to all of them, so long as they pay their $1,500.

So we don’t really know how many more ag land TVR owners will apply if the bill is passed, and how many more blue dots will be added to ag land that is supposed to be occupied by farm dwellings. Just as we don’t know how many of the other illegal TVR owners who couldn’t make it the last time around because they had various zoning violations will re-apply under the new bill, which does away with pesky inspections and other compliance requirements.

The county’s rationale for allowing more TVRs is that it risks getting sued if it doesn’t. Yet somehow it does not fear the liability of funneling thousands of hapless vacationers into a tsunami zone with only one way out and no evacuation plan.

As this map clearly shows, the TVR scene is out of control. It’s time to start working on attrition, not addition.
Posted by Joan Conrow at 9:07 AM

This council and commission is acting in full violation of our laws that we spent many hours dedicating research into.

It is time for the citizens to file complaint and arrest warrants for county officials; each and every one that fraudulently, knowingly and criminally affixed their signature to an approval of something that is in direct violation of existing laws.

you try to citizens arrest county officials and you'll find your a** in jail for battery, kidnapping, and anything else the prosecutor can think of. And you'll get sued by the official.

What people do with their own property should be none of your business. If vacation rental guests are violating the noise ordinance partying late into the night, call the cops. Telling people they can't rent their property to other willing people is fascist. People who feel compelled to constantly butt in to the private business of others are officious a**holes.

I would rather see a sea of vacation rentals than farm land.

If you have ever lived near vacation rentals then you would know that they make bad neighbors.When you prchase land to build a single family residence...you want single families living there.Would you complain if I opened a "Titty" bar next to your family house? At the least they should be made to pay commercial property taxes.

The idea that farm land is endangered here is just ignorant or,more likely, a canard by the anti-development crowd.

" I would rather see a sea of vacation rentals than farm land."


Because thereʻs always supermarkets to get food from right?

Where do these idiots come from, Joan?

"Where do these idiots come from, Joan?"

From the ever-growing population of H. sapiens realestatii -- a new subspecies, possibly mutated from the main stock of humanity by overexposure to mainland jet fumes and Kauai Visitors Bureau brochures.

Would you complain if I opened a "Titty" bar next to your family house?

Please do!!! Can I get a volume discount?

PS - I'll open up a "rent by the hour" TVR beneath my house. Two-way mirrors and invisible cams no extra charge!

And I'll build "The Charitable Home for Wayward Teenage Girls" on adjacent land so the poor dears won't have to have such a long commute to work. Extremely reasonable "rent" can be "negotiated".

Kauai is morally superior to the rest of the world...no "titty" bars allowed.

Another reason not to live there.

My heart aches for the realtors who get so upset when the sales from their vacation rental incomes are threatened - especially when it's so vividly pointed out what they've done to the island.
June 2, 12:11 - Don't worry, you get to keep your precious vacation rentals!
We know who you are though; the one with the red dots all over your heart.

June 2, 12:11 - Don't worry, you get to keep your precious vacation rentals!
We know who you are though

Obviously you don't, since I don't have any vacation rentals! Nice mindless knee jerk assumption, though.

I lived for a while next door to an illegal TVA with a mainland owner and all the problems you've read about. To his credit, Kaipo Asing quickly responded to my request and helped to end it
Nevertheless,
An injustice appeared in the latest TGI article on this subject:
Caren Diamond calls Pierce Brosnan greedy when he's been awarded as one of most active and generous celebrities supporting charities. He's given millions and raised many times that much. He gave Hanalei School $100,000 and supports 38 different charities of all kinds; mainly environmental, children's and women's health and animal rights. It's almost like no matter what you do with your time and wealth; you'll still be a target because your business manager does what they're paid to do. That's not just.
The point is; the word "greed," as defined, was misapplied.
Regards,
Pete Antonson

I remember the year they interrupted May Day at Hanalei School to thank PB for the new playground equipment. A bunch of us felt embarrassed for Pierce, since the time and place were so innappropriate. Of course we realized it was not his fault.

So now I find myself asking; Pierce since you've given so much financially to women's and environmental issues, how then in good conscious, can you inflict yet another transcient vacation rental (and what it stands for) upon our tiny community?

Isn't it obvious how we feel out here? We feel like you're thumbing your nose at us and don't know our community at all. If this really doesn't bother you - Pierce, with all due respect, you're listening to the wrong peops.

I remember that too, Pierce's sons went to Hanalei School during the years he lived here. Yes, he was very generous...so why did they approve a vacation rental for the family home?

Bets he really doesn't even vacation rent, but wants the added value it brings to that property for its eventual sale. What ultra famous person wants a tourist to sleep in their bed? I bet not Piece who values his privacy on Kauai.
Inappropriate Pierce, we're so disappointed you don't give a rat's arse about Haena

I personally think Pierce Brosnan means well. I just think he shows a lack of understanding of what a neighborhood means to those left in Haena. He may have even asked a Hawaiian he's aquainted with, what they think of his choice. He's a star, so they're probably caught off guard and just want to be agreeable. Then, as usual, they turn right around and call Caren Diamond - so she's the bad guy. And that's why Caren is in the forefront. Everyone calls her!!!!
Now, when the Brosnan's sell their home, it will continue to be a vacation rental til the end of time, no matter how many owners. True, once a new owner
actually LIVES there, the house is taken out of the vacation rental pool forever. Again......we'll see how they get around that one....

Everybody should do vacation rentals. At least the money would stay here instead of going to some hotel corporation overseas.