Stars flirted with clouds and the moon slid from east to west, a scene viewed in glimpses as I awoke in the night and looked up through the skylight, until it brightened enough to fully wake me and Koko and I set out walking in a freshly-washed world edged with a smear of gold.

The sun rose and all the puffballs turned pink-orange, billowing in that empty blue space between the tops of the mountains and the round, white moon.

“Now that’s a lovely sight,” I remarked to my neighbor Andy, who I also ran into yesterday morning. With the daylight shortening on the morning side, our paths are once again crossing, to the especial delight of the biscuit-addicted Koko.

Protestors in Toronto crossed paths with the police, thought not so pleasantly, during this past weekend’s G20 meeting, which ended with an agreement to halve budget deficits by 2013 — a move that’s likely to bring higher taxes and massive cuts in government benefits. Yet unsurprisingly, world “leaders” weren’t able to reach consensus on how to control the big banks that control them.

Much attention was paid to the 500 or so black-clad youth who burned some cop cars and smashed windows, but were stopped by a $1 billion security force numbering 19,000:

"What we saw yesterday is a bunch of thugs that pretend to have a difference of opinion with policies and instead choose violence to express those so-called differences of opinion," Prime Minister Stephen Harper's chief spokesman Dimitri Soudas said Sunday.

His sanctimonious comment got me thinking, so how, really, is that any different than the “shock and awe” campaign that the U.S. launched in Iraq because we were pretending we didn’t like the policies of Sadam Hussein, which we had previously supported?

Or America’s use of drone attacks — denounced by the U.N., escalated by Obama and defended by the CIA’s Leon Panetta as “defending this country” — to assassinate people in Pakistan, Afghanistan and Yemen with whom we disagree?

“I’m particularly concerned that the United States seems oblivious to this fact when it asserts an ever-expanding entitlement for itself to target individuals across the globe,” Mr. [Philip] Alston [the United Nations special representative on extrajudicial executions] said in an accompanying statement. “But this strongly asserted but ill-defined license to kill without accountability is not an entitlement which the United States or other states can have without doing grave damage to the rules designed to protect the right to life and prevent extrajudicial executions.”

The Alston report said that a targeted killing outside of an armed conflict “is almost never likely to be legal.” In particular, it rejected “pre-emptive self-defense” as a justification for killing terrorism suspects far from combat zones.

“This expansive and open-ended interpretation of the right to self-defense goes a long way towards destroying the prohibition on the use of armed force contained in the U.N. Charter,” Mr. Alston said. “If invoked by other states, in pursuit of those they deem to be terrorists and to have attacked them, it would cause chaos.”

“It is clear that many hundreds of people have been killed as a result [of targeted killings by the CIA], and that this number includes some innocent civilians. Because this program remains shrouded in official secrecy, the international community does not know when and where the CIA is authorized to kill, the criteria for individuals who may be killed, how it ensures killings are legal, and what follow-up there is when civilians are illegally killed. In a situation in which there is no disclosure of who has been killed, for what reason, and whether innocent civilians have died, the legal principle of international accountability is, by definition, comprehensively violated.”

So when you really look at what we're doing, how is it any different than the so-called “thugs” in Toronto’s streets — except that they don’t have billions and the latest weaponry at their disposal? Or that they’re not pretending to be the world's defenders of the “rule of law?” Or that they were beat back by a security force that outnumbered them 38 to one? And most importantly, that they didn’t kill anyone? 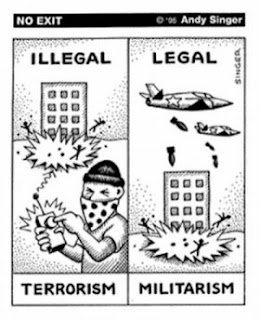 The drone warfare is out of control.

“…to assassinate people in Pakistan, Afghanistan and Yemen with whom we disagree?”

The difference between a drone killing and a terrorist blowing up a bomb in a crowded market place is that if you’re in a marketplace you have no idea your consorting with an enemy, but if you share the same little house with an Al-Qaeda terrorist, a rational person would realize that they might be killed along with the terrorist should they be attacked. Kinda elementary logic folks.