It's Memorial Day, a time for remembering those who gave — or, increasingly, tragically took — their lives while serving in the U.S Armed Forces. It seems fitting to share an article I recently published that examines how America has turned the Hawaiian Islands into its most heavily militarized state. Or as Kyle Kajihiro of Hawaii Peace and Justice so poignantly phrased it: "We become the place where the wars come from.” 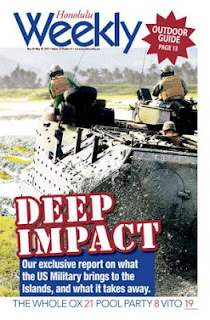 With roots planted in the 1893 overthrow of Queen Liliuokalani and a presence that extends through the entire archipelago, the military’s influence in Hawaii is surpassed only by tourism.
The military controls some 236,000 acres throughout the state, including 25 percent of the land mass of Oahu, and thousands of square miles of surrounding airspace and sea. Yet as a branch of the federal government, the Department of Defense (DoD) operates in the Islands with little public oversight and virtual impunity, except when national environmental laws come into play.
Notwithstanding, it’s burned up native forests, dumped hazardous materials into the ocean and killed protected native species. It’s rendered land unusable with its unexploded ordinance, disrupted neighborhoods with its noise, dropped nearly every bomb known to man on the island of Kahoolawe. It’s unearthed ancient burials, launched rockets from sacred dunes, shut off public access mauka and makai. And in the course of a century, it’s transformed Waimomi, once the food basket for Oahu, into Pearl Harbor, a giant Superfund complex comprising at least 749 contaminated sites.
So why do our people, and politicians, allow the military to stay, aside from the fact that it is well-armed and so deeply entrenched here that Hawaii is the most militarized state in the union, Oahu quite possibly the most fortified island on Earth??
Money is the answer most often given. Read the rest.....
I also wanted to share a sidebar that was cut, due to lack of space, but it's pivotal to any discussion about the military in Hawaii:
More than half the acreage controlled by the Department of Defense is comprised of the “ceded lands” that America seized from the Hawaiian Kingdom following its overthrow of the monarchy. At least six military installations occupy Hawaiian Homelands.


“The first and one of the fundamental impacts of the military is the violation of Hawaiian sovereignty, which was driven primarily by military interests and objectives,” says Kyle Kajihiro of Hawaii Peace and Justice. “It underlies every other impact.”

Hale Mawae, a kanaka maoli writer and filmmaker, sees the U.S. military presence in the Islands as “a bastardization of U.S. foreign policy and the treaties our monarchs made with the United States. It clearly shows that they have had no regard for the neutrality agreements we have made with other countries, and they aid the puppet governments acting in accordance with the lie that Hawaii is somehow a part of the United States. But that's big picture. Going smaller picture, the amount of land they have, including housing, hospitals, facilities, etc., could compensate many Hawaiian nationals who have been forced to leave their nation behind to seek 'opportunities' in a country that neglects its own, including the rights of nationals residing within its occupied borders. We have essentially become non-persons within the framework of this elaborately fabricated lie to allow America's expansion and reach into the Asian world.”

In the meantime, the military continues to do what it wants, says Terri Kekoolani of Hawaii Peace and Justice. “We are always confronted with expansion and fortification. It's very, very difficult, yet we have chosen to engage in peaceful dialogue.”
Posted by Joan Conrow at 7:41 AM

Memorial Day is not just for military... How about remembering ALL of our ancestors and visiting their places of rest, taking care of their resting places. It is really about family.

If EVERY ONE celebrated Memorial Day world wide, and include all of the INNOCENT civilians that were killed too.......maybe we would not have as many wars.

The Hawaiian Islands are OCCUPIED by the US Government and their military under the guise of protecting "our" freedom. Oxymoron.

Although we (US Americans)do not like the word "imperialistic".....this is in fact what we are....

But then, what about all the jobs lost? People working in defense building bombs and delivery systems. What about all the hostess bars in Honolulu that would go broke. A real economic crisis?

We are addicted to the presence of US military, and the only thing that will change is a take over by another imperialistic country....China?

We visit the graves of our kupuna to honor their lives. Let's also remember those who died in the wars created by the war mongers, those in power who most never stepped foot in a battlefield or lost a son in combat. Pray for peace and an end to the needless slaughter.

Mahalo Joan for writing about a subject I researched in college and found those same statistics you menton. The biggest war monger of all is Hawaii's own Daniel Inouye. He alone can be credited for the intense militarization of Hawaii, being on the Senate Appropriation Committee and funneling military dollars/projects our way. He needs to get out of office. His sense of himself and the power he wields is destructive to the well being of Hawaii nei. He is out of touch with Hawaii as Cayetano says, he lives in a vaccum in D.C. Now he wants to destroy the 'aina of Oahu w/ elevated rail, as if military impacts aren't enough nor mass tourism that goes hand in hand with mass development.

Climate change is directly related to the industrial military complex.

Give peace a chance?

No..we cannot all "just get along together".

All of history has taught us that.

How many periods of global peace have existed, do you think? No wars anywhere.

The best we can hope for is mutually assured destruction.

"I won't attack you, but of you attack me I will kill every man, woman and child in your country"...and the "other side" know this to be true.

THAT is the only semblance of peace the world can have.

It's been attributed to Rudyard Kipling, with some dispute, that:

"We sleep peacefully in our beds at night only because rough men are willing to visit violence on those who would harm us."

This applies to domestic police as well as national armies.

Defend against enemies both foreign and domestic.

Oh...if we only didn't try to force democracy down their throats or fight them for their oil, all would be better, you say.

I don't believe in forcing democracy in areas whose centuries-old history clearly shows that it won't culturally work.

To a lesser extent, I frown on the "oil wars" but do see them as either prudent now or necessary later. Just wait for the "food and water wars".

The world is an ugly place, like the playground of an inner city school. If you're not the bully, you'd better be so damn scary that the bullies leave you alone.

It's the way of the world from its beginning, and won't change, even at the price of our potential extinction.

I believe in not starting fights, but if a fight comes to you, you end it with overwhelming maximum force and reduce your enemy to either death (if personal) or the stone age (if national).

Kill them all and let God sort it out.