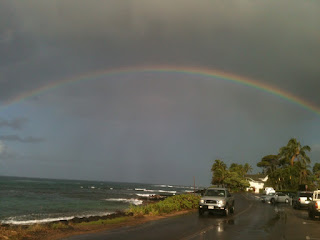 “So how's your day going?” read the text I sent to a friend this morning.

“Oh, just another day in paradox,” he texted back.

Here we are, in one of the most beautiful and ecologically fragile spots on Earth, yet we've got RIMPAC, the world's biggest war games headed our way this summer. And they're gonna be even bigger than last time, cuz the Pacific is now the hate mongers hot spot.

Ironically, the most destructive force on the planet is trying to minimize its carbon footprint by using a few ships powered by biofuels to carry out the wanton wasting of life and limb, land and sea. Gee, I feel better already, knowing the military will be competing with food crops for land and water. Got to keep the war machine fed, even if people starve.

Researchers have now found that repeated low-dose exposures are perfectly capable of gradually killing off whole hives of bees. In fact, 94 percent of hives whose bees had been fed the pesticide died off entirely within less than six months, according to a new paper that will be in the June issue of Bulletin of Insectology.

You can read abstracts for the other studies here and here.

Of course the poison producers, in this case Bayer Crop Science, defended the pesticide in the usual manner, by trying to discredit the scientists and their studies. But the researchers said they'd fed the bees a “distinctly sublethal dose” while noting, “It apparently doesn’t take much of the pesticide to affect the bees.”

So how, then, do you suppose it affects us? Well, here's something to think about as you suck down a soda: bees are dying after being fed corn syrup made from insecticide-treated corn. Sadly, some of the big commercial beekeepers — like the Wyoming guy who has 80,000 hives that he trucks around to pollinate crops in California's Central Valley and the South — feed that crap to their bees by the tanker load because they've stolen all the honey and are too cheap to even buy sugar.

As a beekeeping friend noted with disgust: “Talk about slave labor.”

But hey, since when do insects, even insects critical to our existence, have any rights or merit the slightest consideration? It's our God-given mandate to exploit stuff to the max for profit and then move on through the wreckage.

It's not just the bees that are declining, though. As another friend noted:

Remember when you were a kid that when driving, the car's windshield got covered with squashed bugs? I can remember having to scrub to get the dried bug juice off. When was the last time that happened, either here or on the Mainland?

That put the fear into me.

Yeah, cuz even though we love to hate them, just like we love to hate our fellow human beings who have different political systems and religious beliefs, insects are crucial to the health of the world's ecosystems, and to our survival, too.

We know it, yet we ignore it.

Cuz it's just another day in paradox.
Posted by Joan Conrow at 9:20 AM

Few more years before insects are wiped out on Kauai as long as corn is grown on Kauai.

Then go the birds.

The "Dark side" is always attracted to the Light.

Simpsons Paradox could be used in : All of Kauai's unsolved murders, Kauai's murders made to look like suicide, Kauai's murders called unattended deaths, Kauai's attempted murders, and these Stats should be made public. There's something seriously Deadly going on Kauai. Remember that all the people that were killed on Kauai has families, friends, loved ones, coworkers, and lives that were destroyed by these murderers roaming free on Kauai or else where. They are Protected by those who swore to protect and serve: Remember and Never Forget

"the Pacific is now the hate mongers hot spot."

Seriously? You are calling our Pacific naval and air forces "the hate mongers?" Care to justify that at all? The same forces that prevented the island you currently reside on from becoming a part of imperial japan and used as a staging ground for invasion into the continental US? The same forces I am a part of?

What world do you live in where war games are not necessary?

If you tell me that I can be free of mosquitos forever and all I have to sacrifice are he birds...the choice is pretty simple to me. Hmm I'll really miss hearing those stupid squaking mynah birds...NOT

So much for the environment Kamakele, good to know what you can do without.

The corn people are providing jobs that we so need but they are ruining our island. They do spray the crops. There families do not live anywhere near where corn is grown from what I have heard. I wish they would pack up and leave on beautiful island.

Monsanto has been identified by the EPA as being responsible for 56 Superfund Toxic contaminated sites. Monsanto has been sued, and has settled, mutiple times for damaging the health of its employees and residents near its superfund sites through pollution and poisoning. Wikepedia

KIUC has not done a study on the health effects of smart meters nor do they have anyone who has even attempted to research or study the Health Hazards and Risks associated with their smart meter. KIUC stop pointing the gun at me and holding me hostage against my will, denying the installation of that smart meter.

There has been many cruel dictators that this world has seen before, citizens had to endure the wrongful treatment of its people. We the people of Kauai are experiencing the dictatorship of KIUC ruin the souls of our people. Divide and conquer with misinformation and treats are classic tactics that was used during Bush, Cheney, Rumsfeld quest to rule the world through oil power.

Ignorance is bliss.
Stick your head in the sand politicians, with your hand out to collect the money from Monsanto and Pioneer...to stuff your pockets with to continue to run for office to live a little longer to support the parasites that are slowly destroying the island with pesticides and GMO seeds.

Haha, there isn't a chemical in the world that can rid this island of mosquitos, cockroaches, centipedes, flies, and any other insect that lives here. I meant my post to be a joke because of the obsurdity of the notion that the corn-farmers are going to wipe out the insects which would then wipe out the birds. I mean that is absolutely obsurd.

Nagasaki and Hiroshima saw how obsurd that there could be a bomb that could destory mother nature like it did over 60 yrs ago. Laugh now cry later

"hate-mongers" would imply that they actively stir hatred, fear, and anger toward undeserving targets so as to gain support for later undeserved attacks.

I don't see much of that going on by anyone these days, at least not since the last Bush was in office. That term may have been deserved 8 years ago for our armed forces, but no longer. The war-games are a practical necessity to maintain preparedness and vigilence.

You obviously haven't noticed all the hate mongering against Iran and China, out latest "enemies."

The world I want my family and I live to in is one that has clean air, land and sea NOT contaminated with the by-products of war. Seriously what is the point of this massive military build up for our own "protection" when our land becomes unihabitable and our people who depend on the aina and the kai for subsistence, can't fish, can't farm...sickened by cancer. Never mind the boogie man out there, we are our own worst enemy.

Hawaii has experienced more harm from imperial USA than Japan. It was the US that violated its treaties with Hawaii, not Japan. Greedy American businessmen in Hawaii who coveted the land, perpetuated the myth of a Japanese takeover in order to promote their agenda of overthrowing the sovereign Kingdom of Hawaii and annexing her to the USA. It was Manifest Destiny, and not a false notion of protecting the continental USA from attack.

Its pretty presumptious and arrogant to assume that Japan would've taken over Hawaii if the US hadn't. The Kingdom had friendly relations with Japan prior to the overthrow. Kalakaua traveled there to foster relationships and encourage a marriage between Kaiulani and a Japanese Prince. The attack on Pearl Harbor came nearly 50 years after the illegal overthrow of the Hawaiian Kingdom and targeted a US military base, not Hawaiians.

Hawaii's native people have paid a huge price for the military build-up in Hawaii starting in the late 1800's. Kanaka Maoli were displaced from their lands and the 'aina bombed to death but hey that's okay because we are far removed from the continent and we're non-white so it really doesn't matter to the policy makers in Washington. Main ting we protect the homeland (mainland) but fuck the homeland of Kanaka Maoli. Kahoolawe, Makua, Waikane, Mokapu, Waimanalo,Puuloa (Pearl Harbor) Mana, Pohakuloa, Lihue (Schofield)...the list goes on and on of all the aina that has been raped and destroyed by live fire training and the toxic chemicals of war. Puuloa, known today as Pearl Harbor, was once the most abundant fishing grounds in all of Oahu. Today it is a Superfund Site, so highly polluted it warrants being on a high priority list for clean-up. The abundant limu beds and fish ponds - gone.

Being so highly militarized as we are today with over 26 military bases and installations, we are now the most logical target for an attack. I sure as hell don't feel any safer!!! Just pawns in a game of war where there are only loosers.