Tis the season for nesting turtles, and I spotted these mama tracks on a windward beach at low tide. Was reading about how the young wait till everybody has hatched, then they dig out together. So many lessons for humans in nature. 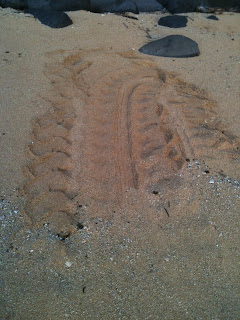 At least some of us have learned that if you plant the beach, you're gonna mess up the natural movement of sand and also hinder access. Others are not so akamai, or do it intentionally because they want what they want, which is to create a vegetative barrier between us and them.

I write about this recurring problem, as well as other beach access issues on Kauai and Oahu, in the current issue of Honolulu Weekly. You can check it out here.

The state is slowing cracking down on the sand swipers who are landscaping the public beach, and as these before and after photos, taken at high tide at Kahala, on Oahu, show, it makes a big difference. 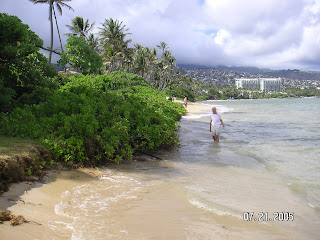 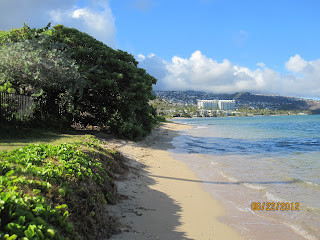 I was told, in researching this story, the state recently did a similar survey at Wainiha-Haena, where some of the most egregious offenders have been busily planting for a decade now. The state has sent out compliance notices, so I can't wait to see this kind of stuff cleared out. 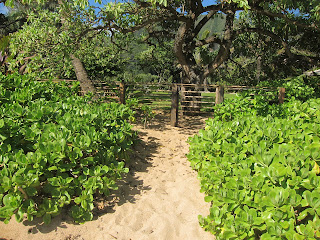 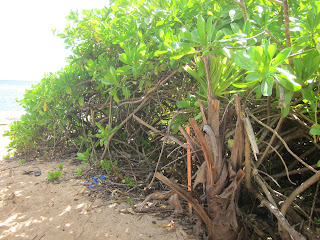 The top photo is Pierce Brosnan's place. The bottom photo shows vegetation in the Wainiha subdivision (where Joe Brescia has his house) that has been planted out beyond the certified shoreline, as evidenced by the survey stake.

I'm sure there are other places where vegetation is seriously encroaching, with Wanini and Aliomanu immediately coming to mind.

We don't, however, have to wait for either the state or landowners to get on the stick. As Sam Lemmo of the state Office of Conservation and Coastal Lands notes: “It’s not illegal to trim and prune stuff.”

A good rule of thumb: the public beach extends to the highest seasonal wash of the waves, so if the water is lapping into the vege, it shouldn't be there.

In working on this story, I realized that if it weren't for people like Caren Diamond, Lucinda Pyles (the Oahu version of Caren), Mina Morita, Harold Bronstein and a few key others, this problem would not have been addressed. We all owe them a super-sized mahalo for devoting countless hours of their lives to protecting our beaches.

As Margaret Mead said: "Never underestimate the power of a small group of committed people to change the world. In fact, it is the only thing that ever has."
Posted by Joan Conrow at 9:20 AM

Hi Joan: I just wanted to share with your readers two old posts on my blog describing the legislative history of House Bill 1808. It was certainly a great example of concerned individuals, the DLNR, Legislators, important court decisions all coming together to protect the public interest. Thanks - Mina

Thanks, Mina. It's good for people to understand the process, as we will need to make sure this bill is renewed when it sunsets next year. And thanks for being such an advocate for access!

The DLNR is understaffed. We should allow community groups to take action (removal) at the expense of those who have planted the naupaka via fines etc.

Or, enforcement i.e., removal cost + 3 times removal cost penalty should be imposed on those property owners. Don't steal our beach! I'm pissed off!

Keep it up Joan.

Why hasn't the COK Planning Department or the State DLNR put up a report violations page on their websites?

They will not act on anything unless it is reported.

Are the perpetrators are innocent until proven guilty? Or are they not guilty by reason of payment to the higher authorities?

Here is a template for a letter to DLNR...
In accordance with Act 160 (HB1808 HD3 SD1 CD1/SB1144) relating to coastal areas, enacted in 2010, we are writing to you regarding impedance of public access at the Fairmont Orchid Hotel on the island of Hawaii by the landowner’s induced or cultivated vegetation that interferes or encroaches seaward of the shoreline.

We have noted that during the last ten years, and particularly during the last six years, the ten to fifteen foot deep naupaka hedge that was planted and maintained by the landowner has gradually and incrementally reduced the public shoreline to a narrow corridor. In some cases, the corridor is a tunnel only three feet wide that impedes both visual and physical access to the coastline.

The State's primary role in the shoreline area is to preserve and protect coastal resources within the conservation district and support public access along and below the shoreline. (HRS Chap. 205A) We are contacting you because we understand that concerns regarding lateral shoreline access and encroaching vegetation should be directed to the Office of Conservation and Coastal Lands (OCCL). HRS § "115- Duty to maintain access within beach transit corridors. (a) The department of land and natural resources shall maintain access within beach transit corridors under this chapter and HRS §183C, by requiring private property owners to ensure that beach transit corridors abutting their lands shall be kept passable and free from the landowner's human-induced, enhanced, or un-maintained vegetation that interferes or encroaches in the beach transit corridors.

We are including with this correspondence photographs taken in May of 2012, and Google Earth photos of the area in 2000, 2006 and 2011 demonstrating the increasingly wide and uniformly hedged vegetation that has narrowed the shoreline corridor significantly over time.

We would appreciate your assistance in informing the landowner of the law, and we request that we be informed of any enforcement action taken as a result.

I'm taking my clippers to the beach.

Mahalo nui for your article in Honolulu Weekly. Its not just a Kauai issue but statewide. Remember when a group of locals trimmed back the Naupaka at Poipu Beach adjacent to Waiohai? That what we gotta do to take back our beaches!

Reclaiming our Kingdom. Reinstituting our government. Rekindling our aloha. Replacing a failing system with one that worked for millenia. Renewing our commitment to life. Mahalo Joan for reminding us that we belong.

Clippers? Why are you guys so incensed but unwilling to do anything real to fix the problem.

Naupaka is very very sensitive to Roundup. It will be gone in no time for about 30 bucks and a spray bottle every few days.

No pesticides should be used on the beach. No Round up. The reef is no place for poison. We're talking about the beach, a sensitive envirornment. Only hand removal.