Crank up the B-52s, because “we're looking for the Love Shack, the love getaway....” How do you get away with running a vacation rental, one that is advertised in at least a dozen places on the Web, and booked into December, even though you haven't renewed your Kauai County TVR permit since it was issued in 2009? Or even get the TVR permit at all, without supplying the necessary documents?

The same way you get away with transforming a plain Jane studio into the Love Shack — a “sleeps four” luxury vacation rental — through the use of “unsubstantial improvement” building permits, thus skirting flood and septic requirements.

And the same way you turn the Love Shack's tar paper-roofed shack — built without a permit — into a single-family residence. All in the flood zone, sandwiched between the narrow road in Haena and the sea. “Just steps to the ocean,” the ads extoll, though they don't mention those big north swells. 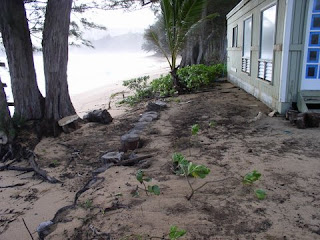 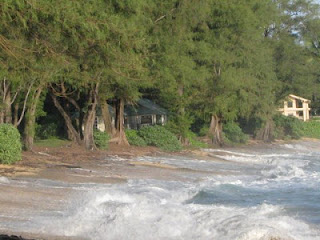 But let's back up for a bit, to 1980, when a 1,088-square-foot studio — the future Love Shack — was built. The Department of Health found the cesspool was 50 feet from the water, and so allowed it, though with a dye test to determine it wouldn't pollute the ocean.

In 1983, a slab was poured and a tiny structure placed atop it — the future Love Shack's shack. 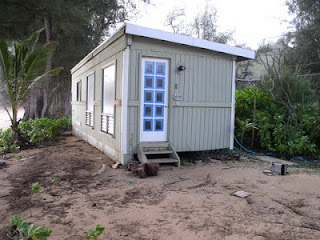 Now the building department had identified it as an illegal structure — “existing storage” — as early as 1994, and issued a citation, in part because it wasn't elevated 21 feet, as the flood zone required. But years went by, with no change.

In 2007, Michaels submitted yet another application, this time to re-roof the future Love Shack and enclose the 200-square-foot “carport.” The county again said it was an illegal structure, and engineering commented: “Note toilet, etc., this is not just garage and storage.”

Meanwhile, the county engineering department ruled the storage, though built after the flood law, was “grandfathered” from its regulations, and so could remain on the ground. Next followed some wrangling over whether the work Michaels proposed was substantial, meaning he would have to meet flood laws, or unsubstantial, in which he got a pass.

Michaels hired appraiser Dennis Nakahara to weigh in. Nakahara described the carport-storage as an “existing cottage,” one that had somehow grown to 320 square feet, though retaining its T&G walls and tarpapered plywood roof. Nakahara used new construction replacement costs, rather than the structure's appraised value, to make the work fit into the “unsubstantial” category.

Permits in hand, Michaels went to town, first gutting the Love Shack's still-unpermitted funky little shack, and then doing the remodel literally under cover. And of course he had to cut the trees to open up the view even more. 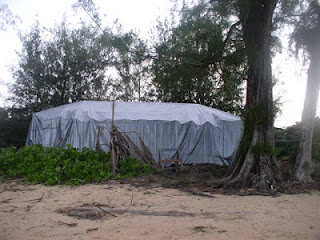 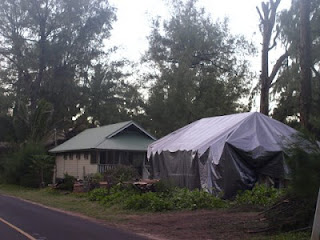 Just about the time he gets finished, the county passes an ordinance regulating vacation rentals in existence prior to 2008. Michaels lines up, like so many others, and submits his application for a two-bedroom, two-bath TVR, as in the Love Shack and its still unpermitted, but much enhanced shack. On his application, Michaels claimed he had used it as a TVR since Feb. 4, 2003 – except he didn't buy it until Sept. 9, 2003. He didn't provide any of the required documentation showing prior rental, either.

Planning records show it was inspected on March 18, 2009, though there's no report, and no inspector is named.   Inspector Bambi Emayo recommends approval, and the county agrees. Meanwhile, the illegal shack, still with no building permit, has somehow become "SFR-2" — as in single family residence #2 — with an approval date of July 9, 2003. Or at least, that's what Michaels claimed in his affidavit, and apparently no one checked, because he got his TVR permit on March 25, 2009.

Michaels never renewed his permit for 2010, 2011, 2012 or 2013. But the Love Shack was rented anyway, to happily oblivious tourists. Well, aside from those who left disgruntled comments on TVR ad sites:

Comment: Great house but...
Guest: Anonymous (Carlsbad, NM)Date of Stay: 06/12/11 Review Submitted: 10/21/11
…My final issue with the Love Shack is that we stayed there in the middle of June and I am still waiting on my security deposit to be returned, near the end of October. This is not a huge issue but more of an annoyance.

Guest: David & Leigh1 (Phoenix AZ)
Date of Stay: 08/19/10 Review Submitted: 12/12/10
…The Love Shack is as described in the listing. It was the perfect location for us & we thoroughly enjoyed our stay there in August. Would have rated it an Excellent, but it is now December & we still have not received our deposit back even though we've been assured that we would.

Oh, one last thing: Back in 2004, Michaels applied for a permit to install a 6' 3” high fence along the entire makai side of the property, effectively cutting off public beach access. Citizens fought it, and when the county required him to do a certified shoreline first, he dropped it. But recently, a fence was put up — with no permit. 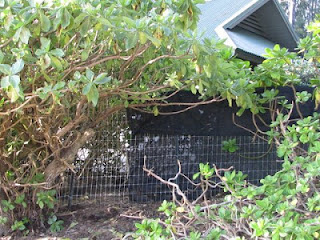 I'm glad you're not backing off on this. There's already so much maneuvering afoot to try to push it all into "executive session" and keep it quiet. Hang in there.

These abuse chronicals keep getting better and better or worse and worse for the county public works building division, is that DOug Haigh allowing the fraud in his department? The county planning department looking worse and worse too. Wonder how many TVR certificates were given fraudulently?

The Building Division is just as corrupt as the Planning Department...

Put the beer in the trunk - inspection passed ...

So this is why we now see clueless tourists swimming out there instead of the local fishermen that used to fish from the shoreline there.

What was it councilman Rapozo said at the recent council meeting questioning Michael Dahilig-a-ding? "We're a laughing stock". To say the least except it really isn't all that funny. Sad how far off track things can go. Great reporting Joan, thanks to you remedy might be at hand.

I know this is time consuming but keep it up. The most riveting stuff you have written in quite a while.

The real problem is that probably a huge percentage of these tvr's are in some way non-compliant -- a cancer for planning (and building?) Our elected clowns and the "inspectors" (and higher ups -- are you listening Sheila?) should be feeling the heat from both sides. And very fearful of money-grubbing attorneys. No wonder they continue to hide in executive sessions -- completely contrary to an open society. This county gov't is f...ed.

Nice to know from a legal point of view if this "love shack" is in state Conservation District. Aren't all of these Haena TVR's inside the CD, being as they are between the highway and ocean? I thought you needed a state permit from DLNR for commercial activity inside the CD. Unfortunately for the public, DLNR in Nov. 2011 made fences in CD something you no longer need a permit for. That would not protect fencing PRIOR to that, however.

Egad -- took the "virtual tour" of this place, and it's got a button at top titled PRIVATE BEACH. Time to get DLNR involved!

Unbelievable, unless you consider the money involved.

It is not in the Conservation District. The State is fighting all TVR's located in CD, because the law clearly states that they are NOT allowed there.

What got me at the council meeting last Wed. (before they took it all behind closed doors) was that the council's questions (when they questioned anything, which was rare) all centered on "what are you going to do to revoke the permits." The question of "how the heck did these places get approved in the first place" never came up. Anyone wanna bet that it will when it comes back later this month? I could always use some extra cash.

I remember sitting there before the council a few years ago and arguing with councilmembers that the ordinance would be ignored and just open the floodgates- that despite provisions to say if there was anything illegal about a place (building permits, not a TVR beforehand, in flood planes, no shoreline certification and a thousand other things) it would not be approved.

I was told that this was part of this grand plan to put a stop to all the "illegal vacation rentals in non-VDA areas."

Saying "I told you so" now is distinctly unsatisfying.

"The Love Shack" has my vote!

I'm for the winners.

If there's a Pulitzer Prize for investigative reporting for Kauai, you'd win it. Excellent series Joan! It's amazing how many years of fraud, theft, tax evasion, and breaking of environmental laws can go on.

We need better enforcement. The state and county are weak & ineffective. We should have the laws changed so that people like you who report this kind of illegal activity get a cut of any ill gotten gains. This kind of incentive will help enforcement. We should also have a community oversight mechanism so that government incompetence or blatant disregard of the law can be overturned quickly.

Thank you for your great reporting. Keep it up!

We need to revoke these permits that we're either issued with falsified information, inspected by less that literate inspectors or accepted by a corrupt planner.

Frailey clearly stated that Mike wrote his permit for him which is beyond unethical.

When, if ever, will these criminals be brought to justice?

Guess we will see how effectual or ineffectual the prosector is cause this sure looks like government corruption , wonder if he'll investigate the planning department and building division/

This sounds like Karen Diamond now. A nut case that is obsessed with the way others live. The fact she lives in a car on other peoples property, is constantly peering in windows, and is mentally disturbed should be taken in account.

Andy has it right. Without enforcement laws are useless.

To Anonymous 8:29 --- This is not about Caren Diamond, who does not, by the way, live in a car or peer in windows. Nor is she mentally disturbed.

And this is not at all about the way others "live." It's about their unethical, even illegal, business practices.

To all the others who expressed support for and appreciation of the series, mahalo nui loa.

Some are mad because research is done and corruption is exposed. They're the ones gaming the system. Will anything of substance happen? Will fraudulently obtained permits be voided? Will those who submitted false applications be punished? Will those who intentionally or ineptly failed to do their jobs be held accountable? What are the mayor and the council going to do about this? And thank you, Caren and Joan.

Falsification of Government Records, anyone?

Commission against Corruption. These people should not be from Kauai. This would be a place the people of Kauai could go to and report fraud, waste, abuse, and corruption.

Then these commissioners would dispatch the proper federal agencies to investigate the reported crime. The crime and investigation will be reported on Hoike.

Kauai needs a communication channel to report many known corrupt abusive practices that has been going on and will continue to go on unless a Kauai commission against corruption is created.

The Mayor, his Admin, an the County Council of Kauai is apart of this fraud, waste, and abuse.

So this property is in violation (erection of an illegal fence) and yet still has a commercial permit and continues to operate.

This is in Wainiha not Haena!