When Nick Michaels added 3,090 square feet to a beachfront bungalow under the guise of “unsubstantial improvements,” he created the super-luxe Blue Lagoon vacation rental — his modern-day version of a traditional cultural site:


If privacy is desired, the property is enclosed by lava rock walls, a Hawaiian method called "hand stacking." The Lava rocks create the ultimate ambiance and privacy. This is our own “heiau [hei' (y) au’]” or special place of worship.

So states Michaels in a “word from the owner” on an Internet ad for his sleeps 10 mini-resort. Michaels goes on to reveal a little more about how he made his place posh: 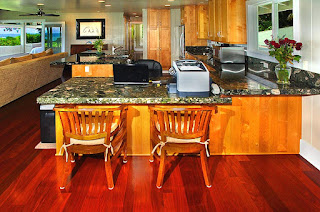 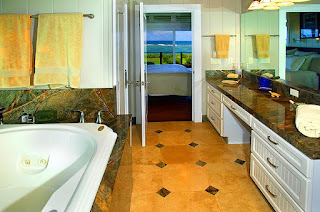 Pricey stuff. Yet the county building permit for the work is based on construction costs of just $50 per square-foot.

Though the work was supposed to entail minor improvements and repairs, Michaels tells us in his ad what really went down (emphasis added):

This place is the real “Blue Orchid”, a newly built home on the North Shore of Kauai, Hawaii.  This home was built in the heart of a dreamer... upon fruition, with much love and gratitude.

Yes, Michaels is a dreamer. More specifically, he's the one who dreamed up the scam of turning tiny old homes into palatial vacation rentals by characterizing the work as an “unsubstantial improvement.” In that way, he avoids the expense of elevating the house to comply with federal flood laws. And no doubt he's grateful that the county went along — and gave him a vacation rental permit to boot. 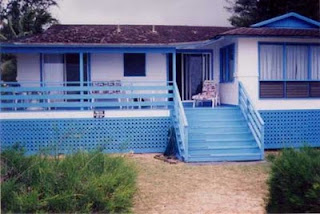 This is what he bought and turned into the Blue Lagoon: a four-bedroom, four-bath, 4,171-square-foot structure with an assessed value of $1.594 million. 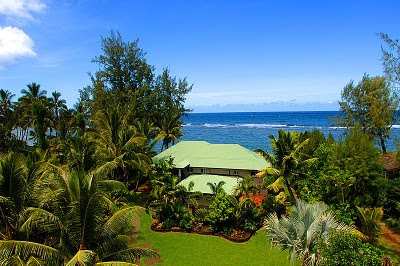 Here's how he pulled it off:

Using this lopsided formula, the proposed work was determined to be less than 50 percent of the structure's value. The county building department, under Doug Haigh, issued a permit for “unsubstantial improvements.” That's when Callahan Construction began building, a process that would last nearly two years, quadrupling the square-footage and adding another level to the house. Since the house is close to the ocean, Michaels began cultivating a vegetative seawall. Naupaka was planted on the public beach, fertilized and regularly watered. 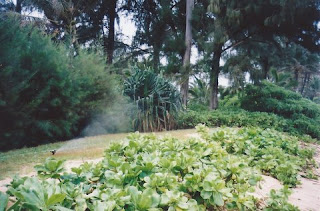 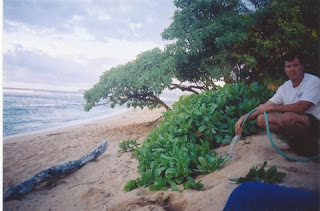 That's Nick, with the hose, back when he first began armoring the shoreline.

It wasn't long before his vegetation had sprawled well onto the public beach, where it continues to flourish. 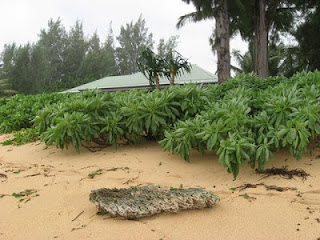 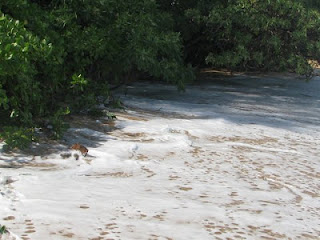 In times of high surf, the public is in fact precluded from actually traversing the shoreline because of his extensive plantings. 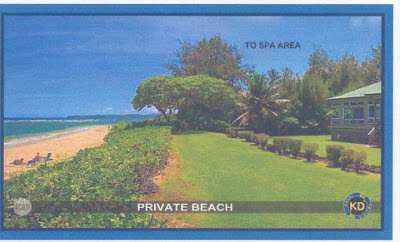 If you're wondering, "is there going to be a crowd?”  The beach directly in front of the property is mostly a private beach. People have to know how to find the beach and beach access is limited.

Yes, it's limited by such ploys as blocking the public beach access parking with planted vegetation and TVR trash cans.

In 2008, Michaels applied for a non-conforming use certificate to operate a TVR. In his application, he claimed that he began its TVR use on Jan. 1, 2001 — 20 months before he actually purchased the property.


Michaels also failed to provide a reservation log, or proof he'd paid general excise and tranist accommodation taxes, which were required by county ordinance. But the planning department issued him the certificate, anyway, on March 27, 2009. There is no record of its required annual renewal, yet it continues to operate.

When county tax assessors recently did their first on-site inspection since the renovation, they found the house had expanded 3,090 square feet from the original — nearly double the 1,626-square-feet allowed under his building permit. Even using the super lowball $50-per- square-foot figure, Michaels made changes valued at $159,500, which is more than 50 percent of the inflated $252,000 appraised value of the house. Quite simply, this "newly built home" — to use Michaels' own words — is a substantial improvement that should be in compliance with flood laws.

Instead we have a vacation rental with bedrooms on the ground floor, in the flood zone, where unsuspecting guests are invited to "Wake up in the morning to the sounds of the ocean lapping on the shore." And it's a very exclusive, gated vacation rental, with its own miniature golf course and spa — just like the mini-resort that it is — on a spectacular white sand beach.


As Michaels acknowledges in his “word from the owner:”

Locals know this place as a very special place.

Some might even say the most special and beautiful place on the island. But that was before dreamers schemers like Nick Michaels usurped it, and it changed it into something else —what he describes as:

THE LIFESTYLE  This is how the rich and famous live, this is how people with big dreams live and this can be a place where you can create memories that will last a life time.
Posted by Joan Conrow at 3:28 PM

How naive certain county council members were in thinking planning staff would make sure the rules were followed and tvr applicants were compliant. They just took an already out of control situation and blew it up tenfold. Why? What was the logic back then because today it makes no sense and so many of us are thinking "we told you so". One thing I must give credit to Kaipo for.

Joan - out of curiosity, is the county responding to any of this? It certainly begs the question as to "what the heck were they thinking?" Inept, corrupt, lazy or what?

RICO charges for everyone involved!

Joan, the excellent documentation
you are providing should be plenty for Planning, the Council, the County Attorney, the OPA, to start sending
notices to these TVR violators.

There's fraud by the property owners, and there's criminal negligence on the part of the county agents. Those pictures and ads should be plenty proof!

I love the work you do.
Investigative reporting at it's finest to help protect Kaua'i's land

This is why they brought in the PROs (Mike X 2)? To fix their TVR problem, pass it along, permit it and be done.

Thanks Mayor, many of us voters will remember how you picked some great department leaders...

It would be nice to have the FBI dig in and follow the money. I'm sure the findings would be front page material. But, the voters would still vote by last name and nothing would change other than a few fines and probation.

You coulda called this series the many ways to spell fraud

For all of you Internet heroes that aren't cowards, Do something about this fraud, waste, and abuse.

Letters are needed to support an investigation by Federal Government agencies.

Just curious, what federal charges do you really think they could bring?

Ya mean if I'm stupid enough to rob a bank, and incompetent enough to shoot myself in the foot on the way out, ass'means I won't get arrested...... ?

TVR's like this are STEALING our beaches (even calling it a private beach!), putting people in harms way by living on the ground floor in a flood area, not paying their taxes, taking away jobs from those at hotels, and raising the prices of houses for those who have to live here.

We should bulldoze the naupaka and illegal grass and send these people to jail for FRAUD and TAX evasion.

Wonder if Roland Sagum or his buddys stole the "heiau rocks" for this wall too? Where else are heiau rock available? Are the rocks identifiable to experts?