“Right in the sand” gush the ads for Holo Makani, a Wainiha vacation rental. But the selling point for Gary Fischer's TVR — now on the market for $5.75 million — comes at the price of the public beach, which has been heavily landscaped to protect a house built too close to the sea.


So close that waves were washing under the support columns during construction, as evidence by this debris line. 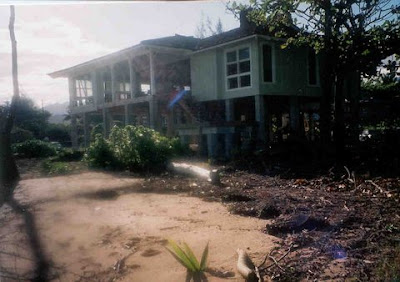 So close that residents of the neighborhood started asking, how can somebody build right on the sand? That question ultimately turned into a lawsuit, Diamond vs State of Hawaii, which ended in the landmark 2006 Hawaii Supreme Court affirmation: yes, the public beach extends to the highest seasonal wash of the waves.

But things were different in Rocky's day; or more specifically, 2002, when Sylvester Stallone  sold Fischer this oceanfront lot for $625,000: 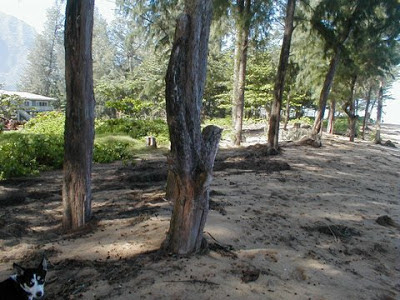 Back then the state Department of Land and Natural Resources was still using vegetation to set the shoreline, and the county at the time required just a 40-foot setback. Though Fischer had ample room on his lot to set the house back, he chose to build as close as possible to the water.

It apparently proved too close for comfort, because Fischer quickly began planting naupaka in the setback. The planning commission allowed it, figuring a little greenery would soften the in-your-face house right on the beach. 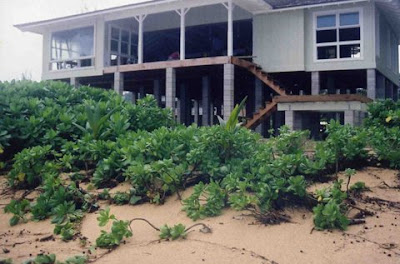 Except the naupaka kept getting washed out when the winter waves washed in, year after year: 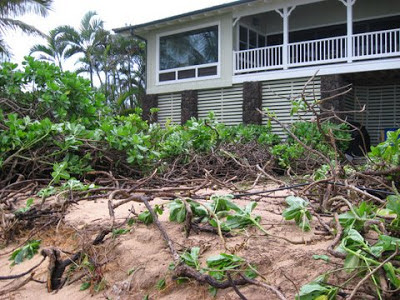 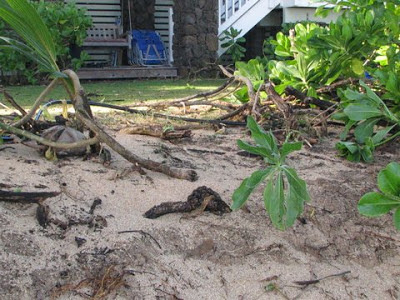 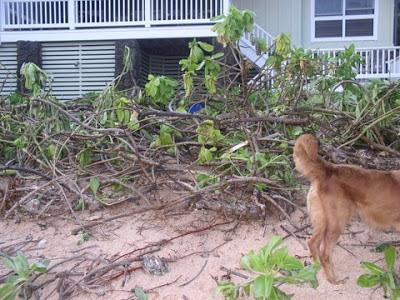 Undeterred, Fischer kept replanting, steadily creeping not only further makai, but also onto the then-empty lots on either side of his property. 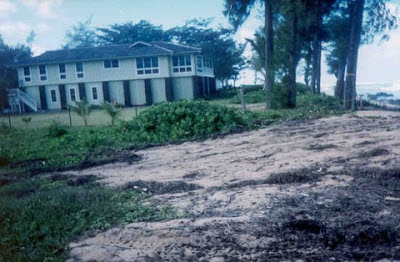 By 2009 he was adding heliotrope trees to the mix to help anchor the naupaka and create a thick vegetative seawall on the public beach in front of his house: 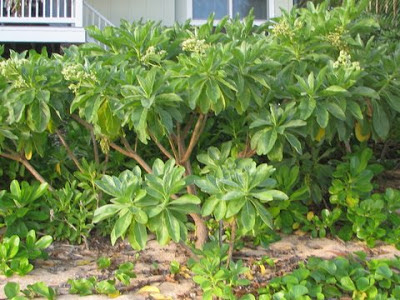 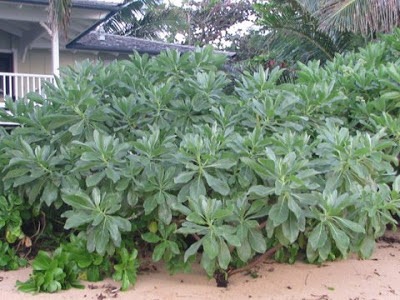 Fischer and his wife Samantha initially lived in the house. Then they moved to Princeville and turned the house into a vacation rental so it could get grandfathered in under the new law.

In his TVR application to the county, Fischer submitted an affidavit in which he swore he'd been using the house as a TVR since 2005, However, he and his wife had also claimed the homeowner's "permanent home use" property tax exemption in 2005 and 2006.

Fischer, a Realtor, submitted proof of transient accommodation and general excise tax paid in January 2007. But it's unclear if the payments pertained to Holo Makani, because the tax licenses were issued in1996 and 1989, respectively, well before the house was built. None of the other required documentation was in the file.

But on March 30, 2009, former deputy planning director Imai Aiu approved the TVR certificate anyway. By July 2009, when Fischer submitted his renewal application, Holo Makani was openly advertising on the web as also having a "downstairs studio" with bathroom, kitchenette and cable TV.

FEMA, which was conducting its own audit of properties with flood zone violations, notified the county of the downstairs studio on Aug. 6, 2009. Such a use within the flood zone is clearly illegal. Nonetheless, the county granted Holo Makani's renewal on Aug. 24, 2009. A county inspection form states "subject property has no violations." It is initialed, but undated.

On July 16, 2010, Fischer came in for a $56,200 building permit for a lower level addition. Curiously, the applicant was listed as Sylvester Stallone, who had sold the lot eight years earlier. On July 30, 2010, Fischer sent in his TVR renewal. No approval date was listed.

The county told Fischer to get a certified shoreline prior to issuing the building permit. On April 18, 2011, the state surveyor sent Fischer's engineer a letter advising that a wire fence, rat traps, sprinkler heads, tiki torch and recently planted vegetation were found makai of the shoreline — or in other words, plainly on the public beach. He was advised those issues had to be resolved before the state would certify the shoreline.

Finally, it seemed, Fischer would have to trim back his vegetation and get his other unauthorized junk off the beach.  But then the county planning department inexplicably waived the shoreline requirement. The beach encroachment remained.

On July 28, 2011, Fischer submitted his TVR renewal. On Oct. 12, 2011, planning director Mike Dahilig sent him a letter, telling him to immediately "cease and desist" all TVR operations. Fischer was warned his certificate would not be renewed until he had cleaned up his flood  and other zoning ordinance violations. It's unclear whether the permit was renewed that year.

On July 26, 2012, Fischer again submitted his annual TVR renewal. No record is shown of it being approved. But in the MLS listing, Holo Makani is presented as having a valid TVR certificate with an "EXCELLENT!! rental history." Buyers are advised they must honor short-term rental contracts.  It is currently booked through August on its website.

Meanwhile, Fischer's after-the-fact permits are moving through the county. On April 17, 2013, the county building division OK'd his permit for enclosed "storage" on the ground floor. (How much storage, in addition to a garage, does a vacation rental need?) And though the electric panel had to be relocated above the flood level, an above-ground Jacuzzi with its electric pump is apparently allowed to remain. 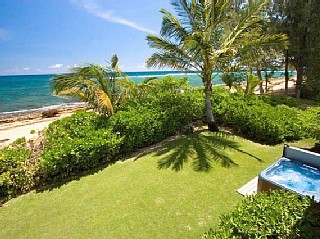 Assisted by the actions, and inactions, of the state and the county, the public has lost the lovely wide open beach at Wainiha. The dunes are now heavily landscaped to provide privacy and protection for the upscale homes and vacation rentals that now line the shoreline. It's taken just a decade for the privatization to occur. 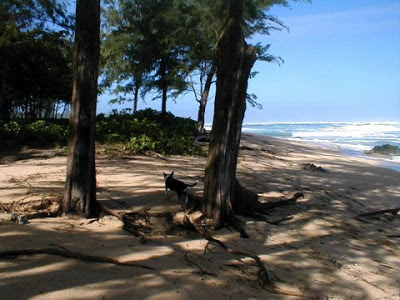 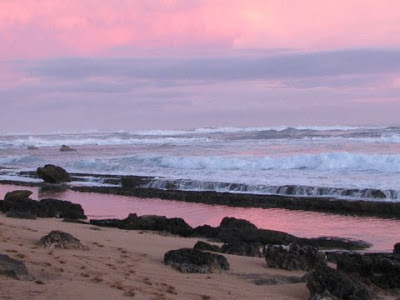 wow joan, seems that the AbChrons are showing more blatant abuse w/ every new story, are u saving the worst for last ? maybe when we get up in the hundreds do you think dahilig will have a few resolved before he resigns and will the previous county perps be held accountable? looks too big for the county to handle the workload so it seems the state or fed will eventually take over the investigation, excellent research and great investigative journalism, aloha dean

They're stealing our beaches! Fischer should have his realtor license revoked. He should be sent to jail for FRAUD, Tax evasion, & putting people's lives in danger by renting out the lower level. This building should be removed from the public beach. It has always been the public beach and always will be.

once again, communication between departments is something this administration is incapable of doing.

Communication, ha! This administration only hires friends and family with no experience or education and you expect them to talk to one another about complex issues such as the administration of law.

is anyone else streaming this trainwreck at the council meeting? Dahilig and Kollar are ridiculous.

we need a hurricane to wipe all of the TVRs out!

A massive north swell is all it will take. I'd like to see this investment wiped out before he can flip it.

This is all apart of Kauai's Mafias (Syndicates) Greedy Lust for money, power, and control. These Evil Families are Kauai's Home Grown Terrorists.

deleting posts joan ? you getting pressure from the council?

OH darn I missed the council call to action today...how did it go? Inaction or just a lot of words without meaning again?

Oh and was there finger pointing because I imagined there must be someone else to blame, right?

yup, dahilig blamed and threw the inspectors under the bus, classic pass the buck...pathetic

8:37 -- No posts have been deleted, and I'm definitely not getting any pressure from the Council

so he or his deputy dog signed the permits but the ones to blame were his employees?

I have been reading your blog for a long time. Thank you for writing your blog. For bringing attention to these issues. You are Hawaiian at heart. Thank you so much for fighting for our beaches.