Every story has a beginning, and for Kaulana Haena, it starts with the Wainiha subdivision, a five-acre parcel east of the YMCA's Camp Naue. That's where Dr. Alex Ferreira proposed developing 17 condos and four houses in 1978. His plan met with fierce opposition from residents concerned about the environmental impacts.


Their fears were underscored by county planning staff, who reported:

The density of development and the nature of use (visitor oriented/resort residential function) are the main factors that are judged to cause the more significant effects to the environment of Haena.

Nonetheless, planners recommended approval and the Planning Commission went along. A group of neighbors, including Samson Mahuiki and Kaipo Asing, promptly filed suit challenging the approval.

In 1982, the Hawaii Supreme Court ruled the Commission had violated state law by failing to find the development, which was within the special management area (SMA), would "not have any substantial adverse environmental or ecological effect" or that the adverse effect was "clearly outweighed by public health and safety" prior to the approval.

No owner shall subdivide or re-subdivide his Lot, nor shall any Owner seek a zoning amendment, use permit, variance or any other type of approval which would allow a use of his Lot for other than single family residential use. No commercial activities shall be allowed on any Lot.”

With those restrictions in place, Stallone began to slowly sell lots. The first house was constructed in 1995 by Marvin and Melinda Goodman, residents of Santa Barbara, Calif., who had bought a lot for $925,000 in February 1992. Shortly afterward, Iniki hit, and it looked like this: 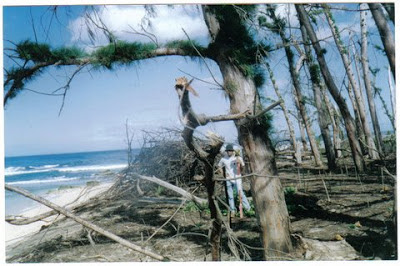 Contrast that to today, where it is fully landscaped, right onto the public beach, like so many of the other TVRs in the Wainiha subdivision: 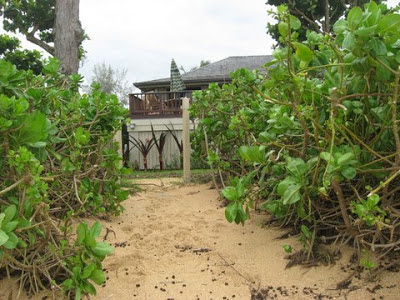 In 2008, the County Council passed a law regulating vacation rentals. The Goodmans submitted an application for Kaulana Haena in October 2008, claiming they'd been using the house as a TVR since 1995. However, their application file contained no proof of general excise or transient accommodation taxes paid and no rental reservation log, as required under the law.

The Goodman's property manager, Leila Kawaihalau, later submitted the 2009 TVR renewal, which was due by July 31, 2009. The county received it on Aug. 3, 2009, but rejected it because “our records show you have no valid non-conforming use certificate to renew," according to a letter from then Planning Director Ian Costa.

Leila sent in the approval letter from Bambi, along with the renewal. On Oct. 13, 2009, Ian sent another letter saying the department planned to deny the renewal application because it was received late. However, he gave her 60 days to submit a letter explaining “extenuating circumstances” for the late submittal.

Leila sent in a letter claiming she was sure she had submitted the renewal in a timely fashion, but had “learned a very valuable lesson,” which was to use certified mail so she would have a record of when it was sent and received. The TVR certificate was renewed.

Meanwhile, despite prohibitions against guest or ohana houses in the subdivision, Kaulana Haena is openly advertised as having a guest house, which can be rented in addition to the main house:

The guest house is an attached 500 sq ft, 1 bedroom studio. There is a King size bed in the bedroom as well as a bathroom, living room, small dining area and mini kitchen with a full size Sub Zero fridge. The living room has a twin size pull out sofa bed.

When booking this 5,000 sq. ft. home, you have the option of either renting the 4 bedrooms which are located in the main part of the home or adding the 5th bedroom which is an additional 500 sq. ft.

This property, which never proved it was eligible for a TVR certificate, should have lost its certificate anyway for twice renewing late and renting a guest house.

Similar irregularities have been documented in the Abuse Chronicles for four other properties in the Wainiha subdivision:  Banana Beach House, Holo Makani, Hale Hina and Hale Koaniani. Yet they all still operate. Combined with Kaulana Naue, these five properties  alone — and there are other TVRs on this short stretch of coastline — can accommodate 41 to 46 guests per day.

That seems to be quite a lot, especially for a subdivision that was never supposed to have any commercial uses — a subdivision that was approved under an SMA permit that is supposed to consider the cumulative impacts of a project. Remember the Mahuiki decision, and how the Commission was dinged for failing to prove the project proposed for this very same plot of land would "not have any substantial adverse environmental or ecological effect" or that the adverse effect was "clearly outweighed by public health and safety" prior to the approval?

Yet all those impacts have been allowed to occur in a defacto manner by approving — and continually renewing — these TVR permits without ever revisiting the SMA.

Back in 1978, when the Planning Commission was considering the condo project, several members expressed reservations, although they felt they had to act because the parcel previously had been upzoned to R-4.

“I hate to see an area as beautiful as Haena being slowly eroded and destroyed,” said Commissioner Fujita.

Commissioner Tehada was more blunt. “Unfortunately, and this is the saddest part, our ordinance permits the use of catering to short term visitors in the residential district. In the sensitive environment of Haena, this function, which is more of a resort type use, is highly out of character and I portend that in the long run, highly detrimental. I am sure that the past decision-makers, in their deliberation and subsequent decision to upzone the land, did not intend that it eventually be used as a resort/visitor destination area.”

Yet here it is, a resort area. And our public beach has been turned into Kaulana Naue's private yard, as evidenced by this debris line deposited by the high wash of the waves: 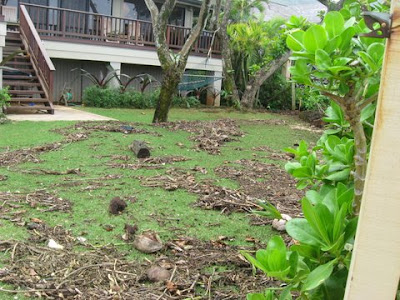 As the saying goes, those who forget history are doomed to repeat it.
Posted by Joan Conrow at 9:59 AM

The cancer that has spread and continues to spread (VACATION rentals in neighborhoods) is rooted in the planning department and commission.

Sounds like grounds for another lawsuit. Can the public get special counsel to sue the county when it screws up?

wholesale incompetence by the planning inspectors. this place had in its very deed that there was to be no commercial use, and so bambi gave them a use permit for a commercial rental?

who do you sue? bambi? the homeowner? could a citizen sue to enforce the restrictions against commercial use - maybe a declaratory judgment?

But council won't be doing that special investigation, just wait, they have been warned that they dare not open this can of worms.

You are expecting this planning director to actual read the files or the history of the land use? Get real, he can't even find them, he has already said this.

Pathetic, sad and very sorry excuse for a planning department! Hope they are able to convict the one that got arrested and proceed to prosecute the rest on fraud.

The reason the county of Kauai does not want an investigation done by the FEDS- because there will be too many fish to fry and it's not going to only come from the planning department.


Kauai definitely needs a whistle blower or someone from the inside to flip and rat out all of the criminals in office.

how about the ageism, sexism and racism is going on in there - of course it is selected because they have some 70++ year young employees that get away with whatever they want...

And the added wastewater, loss of mauka makai access and "entitled" tourists have chased traditional uses of this land away, time to open that can of worms!

Whatever happened to the public access to hideaways beach - noticed that there is parking for exactly 6 cars and the guest of the hotel use those because they don't want to pay for the extra parking fee...it really sucks.

It's apparent the Special Management Area means nothing to the planning dept. Auwe!

you are correct June 1, 2013 at 7:05 AM and they should no longer be receiving federal funds for their coastal zone management program, since they have NO qualified employees that actually understand the law or care about the environment.

they dare not hire anyone that has experience, education or knows anything because it would make the good for nothing lazy employees look bad...