When wealthy real estate developers and speculators go looking for chumps, their gaze often falls on Kauai, where it's easy to con the planning and building departments, and even snooker the state. One of the more blatant examples is Hale Kepuhi, a house that was built on conservation land and given a valuable vacation rental permit even though, like so many others, it failed to prove it was eligible to have one.


What's more, the current owner has landscaped more than 4,000 square feet of public beach, as can be seen in stark contrast to the adjacent uncultivated parcel: 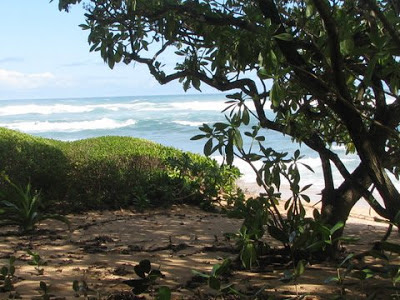 The saga began in 1991 when developer Don Karleen secured a county building permit to construct a house on a narrow strip of sand wedged between the highway and the ocean, just west of the double Wainiha bridges and horseshore curve. You know, the place where waves cross the road when the surf gets really big. 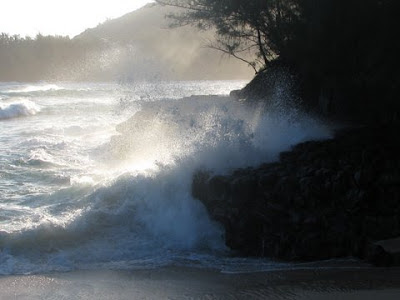 Karleen grubbed the lot and set foundation footings for a 1,900-square-foot house only to discover — oops, big county booboo – that the land was actually zoned conservation, which put it under the jurisdiction of the state. 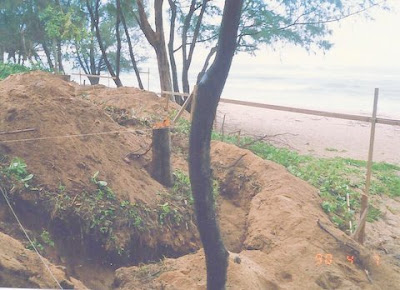 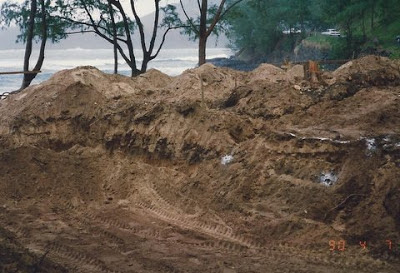 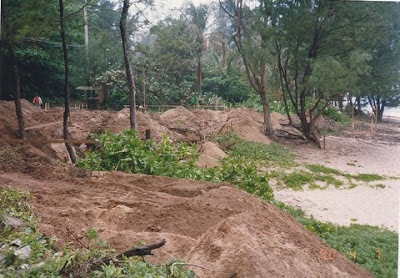 The state ordered Karleen to stop work and rejected his request for a permit to build.

Undeterred, Karleen's attorney, Walton Hong, petitioned the state Land Use Commission to have the land reclassified from conservation to urban. Sure, said the LUC, which made the astounding finding that the rural area around the lot was “characterized by 'city like' concentrations of people, structures, streets, urban levels of services and other related land uses.”

In an attempt to mitigate the impacts, former county Planning Director Peter Nakamura negotiated strong conditions with Karleen that the LUC endorsed in its 1992 decision and order. These called for a single-story house with a loft, no larger than 1,000 square feet with a 400-square-foot garage, and no decks on the ocean side.

Karleen also agreed to grant a pedestrian beach access through the property, and to never seek approval for “a seawall or other shoreline stabilization device.” He was also required to submit regular reports to the county planning department and office of state planning to show progress in complying with the conditions.

It appears that development conditions are absolutely meaningless on Kauai.  Karleen never provided a beach access.  [See update at end.]  What's more, he built a house with a "loft" that looks suspiciously like a second story and a lanai off every room. County real property records show the house has a living area of 1,428 SF — 428 more than allowed. Here is a picture of the three-bedroom, three-bath house as it is currently marketed to vacationers: 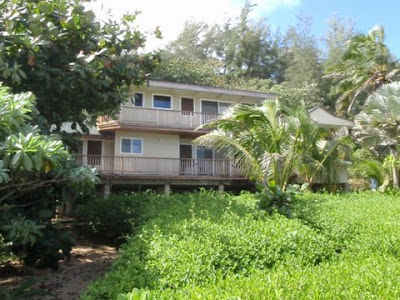 In late 1995 or early 1996, Karleen quitclaimed the property to Peter Carr, Rick Karleen, Eric Stolzberg and Bernard Karleen for debts he'd incurred after his insurance company went bankrupt following Hurricane Iniki. In April 2003, they sold the house to Keiko Beckman of Temecula, Calif., for $1.45 million.

In 2008, Beckman submitted an application for a TVR certificate, claiming in her affidavit that the TVR use began in August 2007. As “proof,” she inexplicably attached a reservation log from 2003 and a lease from 1997. No documentation of any more recent rentals was submitted, even though to claim a "grandfathered" use she was supposed to show rental activity in the prior two years.  She also failed to submit proof that she had actually paid general excise and transient accommodation taxes.

Although her application lacked all the documents required by law, planning inspector Bambi Emayo sent Beckman an undated letter approving her TVR certificate, which was followed by an undated form letter signed by former deputy planning director Imai Aiu. The online TVR log showed an approval of March 2009.

Meanwhile, Beckman bought one of the properties that Joe Brescia had built in the Wainiha subdivision, where he had heavily planted the beach. Beckman soon adopted the same strategy at Hale Kepuhi, but instead of cultivating only naupaka, her landscaper also used invasive privet, which forms a dense hedge. 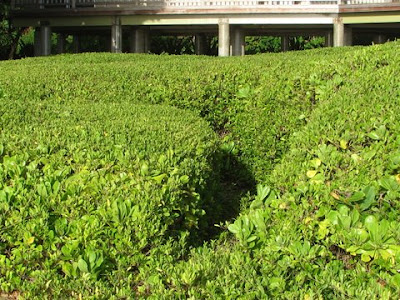 Notably, though the tax map key shows the parcel as 10,833-square-feet, Karleen sought LUC reclassification for just 6,606 square feet. Both he and Beckman were aware that the remaining 4,227 square feet lies makai of the high water mark — or in other words, it's public beach, as further evidenced by the piles of debris left by the high wash of the waves: 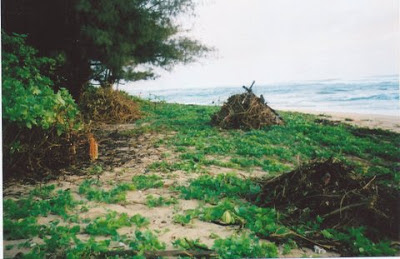 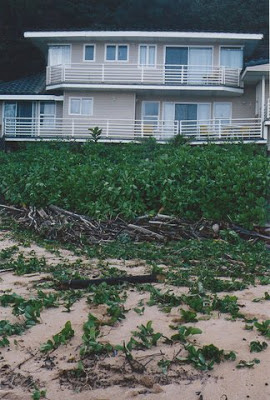 Ironically, though the house was never supposed to have a seawall, the same armoring function has been obtained through the vegetation, with the resulting escarpment: 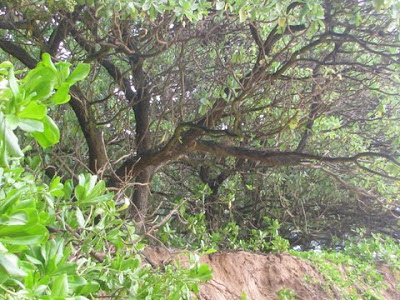 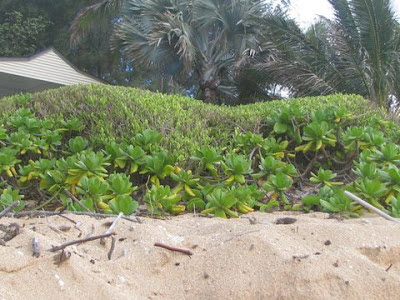 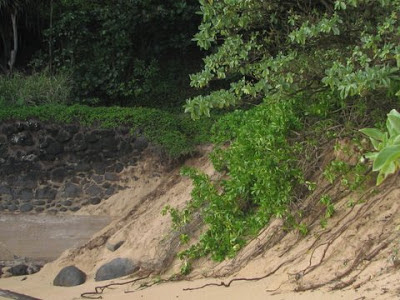 So the public is losing its beach and fishermen have lost a traditional access because nobody in planning bothered to enforce development conditions or follow the provisions set forth in the TVR ordinance.

But hey, who cares about that? What's important is that rich speculators are able to obtain  TVR permits they were never supposed to have, thus greatly increasingly the value of their property while the county looks the other way.

Update: In a June 13, 2013 email, Karleen says "a path was provided on the Haena side of the home for beach access. This path was inspected by Mervin Rapozo."

However, it appears the current owner maintains the property in such a way that it is not clear to people that there is a public easement through the lot.
Posted by Joan Conrow at 10:33 AM

Go team Permitting! Way to go, alright! Keep it up!

The County is stalling until you do all the investigations for them.

The County should be counting the days they have left until the mainland media picks up the juicy theme of "Poison in Paradise: the Corruption of Kauai," and the Feds descend like avenging angels. D.C. desperately needs a populist "We're on the side of The People" theme to play right now, and this one would be perfect.

They already know what happened, now they are just trying to cover it up.

wow, single story w/ loft=nope....1000 sqft footprint=nope.....25'height limit=nope.....easement to beach=nope....all required paperwork=nope...single family residential use=nope...updates to LUC=nope....stealing beach=yep...making money=yep....no county/state oversight=yep....gov looks stupid=yup......people are pissed=yup....NS changing for the worse=yup...crime rate up=yup..dont look good for NS, i avoid the area cuz of the congestion traffic wise, and when hanalei surf gets good xpect a packed lineup....i surf the hidden spots so that keeps me good but the trend seems to be headed to a maui density, too bad for the kids that this is the new normal and never got a glimpse of how it should have been kept, the soul is still there but it keeps getting harder to find, my wife did an installation at the contempo titled "trouble in paradise" back in the early 90s, didnt address in particular the tvr thing but more of the division of community between the big money people and the common folk......thanks for your work joan, ya think by the time we get to 50 AbChrons anything will get done ? aloha Dean

What's even sadder is that climate change will soon make all of this seem inconsequential.

I pray for a huge north swell or a 100 year storm to make it all mute. Mother nature...do your thing.

or a good sized tsunami....bye bye house. maybe it will make a great artificial reef somewhere.