It's the best time of year, when it starts to get light even before 5 a.m., which is why the dogs and I were up and out early, too. A white wedge of moon caught my eye, though it was quickly devoured by clouds. I noticed the albezia are in profuse bloom, which is a tragedy for the watersheds, though not for the bees, whose buzz electrified the moist, perfumed air well before the sun burst from the sea in a brief blur of pink and gold. 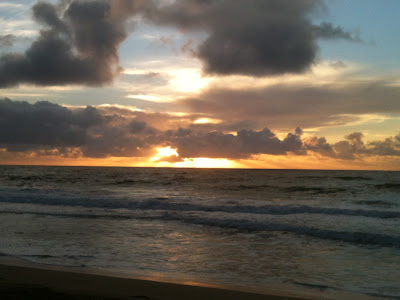 In the news, various stories caught my eye, like how Europe is successfully beating back GMOs. Chemical giant Monsanto announced that it has no plans to seek European approval of its new genetically engineered seeds, due to stiff public opposition and low farmer demand. Syngenta, DOW and BASF have already pulled out of many markets in Europe, where GMO labeling is required.

Now do you understand why the chemical companies are fighting tooth and nail against GMO labeling in the U.S.? Labeling hurts their bottom line.

Meanwhile, the USDA is still trying to figure out how Monsanto's Roundup Ready wheat, which was grown experimentally in Hawaii and elsewhere, but never approved for market, ended up on an 80-acre farm in Oregon. In response, South Korea and Japan have halted some U.S. wheat imports and Monsanto saw its stock prices fall Friday due to "concerns over Monsanto's inability to control its non-authorized genetically-engineered product." Hello! That's what we in the test zones have been worrying about all along.

Something else caught my eye, the comment from Kauai Visitor Bureau director Sue Kanoho, as reported in The Garden Island:

We'll never know, because all attempts to quantify any impact of tourism have been thoroughly and successfully quashed. So bring 'em on, as many as can buy tickets and the airlines can carry. Grab the cash while the getting is good, and worry about the impacts later. Or not.

Another article caught my eye, the one about a federal judge ordering Google to comply with the FBI's warrantless demands for information through so-called “national security letters.” Using these secret letters, the agency can collect all sorts of private data without saying why, thanks to the unpatriotic Patriot Act.

In another blow for privacy, the Supreme Court has ruled that cops can take DNA samples from people arrested for “serious” crimes under the rationale that it's akin to taking fingerprints. Mmmm, not quite. Even conservative Justice Antonin Scalia “got it” with his dissent:

The Court disguises the vast (and scary) scope of its holding by promising a limitation it cannot deliver. The Court repeatedly says that DNA testing, and entry into a national DNA registry, will not befall thee and me, dear reader, but only those arrested for “serious offense[s].”  I cannot imagine what principle could possibly justify this limitation, and the Court does not attempt to suggest any. If one believes that DNA will “identify” someone arrested for assault, he must believe that it will “identify” someone arrested for a traffic offense. This Court does not base its judgments on senseless distinctions. At the end of the day, logic will out. When there comes before us the taking of DNA from an arrestee for a traffic violation, the Court will predictably (and quite rightly) say, “We can find no significant difference between this case and King.” Make no mistake about it: As an entirely predictable consequence of today’s decision, your DNA can be taken and entered into a national DNA database if you are ever arrested, rightly or wrongly, and for whatever reason.

And finally, in The Garden Island's well-done piece on the demise of Coco Palms, the words of smarmy developer Patrick Duddy caught my eye:

Duddy said Kauai has a reputation of being difficult, and some of his “very good friends” who are building on the island are having similar problems. He said he is going to take his money and build somewhere else.

“I had good intentions, I was going to invest a substantial amount of my inheritance in there,” said Duddy, adding he had $3 million of his own money and $15 million from his partners in the deal.

Duddy said he and Kusaka worked diligently to build a historical cultural center at the new Coco Palms. Duddy said he would have dedicated a park in the back of the property and was going to “take control of the beach” and spend about $800,000 widening it [WTF?] by the Sea Shell Restaurant.

“The people of the island should know, they just lost out on a good deal,” Duddy said. “I will never, ever build on Kauai. I will never. And I’m part of a huge hotel chain that is moving forward right now.”

Yeah, well, goodbye, and good riddance. And as my daddy used to say, don't let the screen door hit you in the ass on your way out.
Posted by Joan Conrow at 8:34 AM

Ha ha! Good one. "Don't let the screen door hit your ass on the way out." Yeah, good riddance to guys like that. We've waited for over 20 years for something to be done. That's more than enough for being considered "difficult."

Finally, we need to get off the TOURISM overload. You are exactly right. We don't want to become Oahu or Maui. Keep Kauai green and country. We need to diversify this island's economy. Let's cut the advertising budget for the Kauai Tourism office and invest more into growing food for our people.

Now, the rest of the developers too. It can be like a sing along.

If Europe can ban GMOs why can't Kauai?

GMO- is a chemical and biological warfare.

As you probably already know there are NO public toilets in Kilauea.

It's called economic development and the permitting department, if they were a real planning department could deal with it when they write the permits for these tourist activities - but we all know that under this current 'leadership' that isn't going to happen.

so Bernard needed to put the desecrated bikepath there for public access once he made the backroom deal to give the beach away. Sounded like the developers were working with Bernard pretty closely. Bernard should go with the developers. Kusaka was gonna make a small fortune selling Wailua

so if the coco palm # of hotel rooms is removed from the # allowed under the charter amendment - is the county still under or over on the allowable amount of rooms - since the airbnb numbers don't count and the TVR numbers don't count - how was this guy going to build any more hotels anyway?

Seems like these developer guys all the same, greedy. This guy Duddy just seems a little more jackass. Tourists will keep coming until you close the island, don't be hating them, even if some are hard to take, they are just here to enjoy the scene,like everyone else. If they don't come, complain. if the do come,complain.

if too many come or too many stay in a community, things get out of balance. Like only eating candy, at some point, if you don't stop, you get sick

Does anyone know if this nonsense has a permit to film a 'documentary' in Wailua?

Who is this David Kawananakoa
President, Hawaii Ahupuaa Association?

Supply Free doggie poop bags along with Kauai maps as tourists step off the airplanes......its better to poop in a bag, than use any of the public bathrooms.

They can't even give a map of the bus stops on the island, let alone the locations of public bathrooms.

12:41...have the public restrooms at the ballpark been closed? Don't think so.

A map for bus stops would be a good thing, if not a bit unwieldy perhaps and costly to produce...but a good thing. Another good thing would be printing the fares in fonts big enough to actually read on the schedules that are posted at the stops. I ride the bus daily, and often find myself explaining the fares to visitors, and/or how the routes work. Nice way to meet people, though.

The basic problem is still the "Boss Hogg" mentality of our government structure (if you don't get that, watch "The Dukes of Hazard" sometime). Some people call it the "GOB (Good 'Ol Boy) Mafia". Whether you believe that perception or not, the end result is the same...money spent for nepotism, corruption, and pork barrel boondoggling rather than on infrastructure and building self-sufficiency. The folks who engage in such behavior will continue to do so until forced to stop by the people who pay their salary.

There is a public bathroom at the ball field, you are correct.

However it would not cost anything other than an employee's time to put the bus map here:

We want tourists, yet don't provide information like the location of public restrooms or bus stop locations, hello Tourism Board?

4:11 - I think you're right...good place for it. There'd have to be a separate map for each route, but anyone with a passing akamai with graphics programs and Google could do it in certainly less than a week.

We promote ourselves as the "heart of aloha" and yet we treat each other in patently bigoted ways...and most often it has nothing to do with race, but rather with the adherence to civilized dialogue and interaction.

In the words of the iconic Jacob Smirnov..."What a country!"

"We promote ourselves as the "heart of aloha" and yet we treat each other in patently bigoted ways...and most often it has nothing to do with race, but rather with the adherence to civilized dialogue and interaction."

Its "cultural" and political to have fears and suspicions about a culture one has not understood or recognized. Why wars?

With hate and resentment.we preach our religions as THE ONE...yet our acts do not follow the "Golden Rule"

Lower than the wild beasts that live and kill only to survive, we kill if it brings more money, to control, to dominate and to exploit.

Where is the Love? All life is an Illusion

It is fear of change, yet everything changes and nothing stays the same.

It is the fear that Kauai's Terrorists put into people that oppresses people from a chance to change, So the people believe that nothing will ever change.


We are FREE men and women who can decide to make a difference. The Slaves that are on the GOBAG's leash are not FREE.


They owe everything and receive little as in county jobs, union jobs, police jobs, PMRF jobs, courthouse jobs, trips to Vegas, dropped charges, drugs, and Raping and Killing people is their REWARD.


When will the people of Kauai start fighting back to get back what was once a peaceful place to live. Let us protect everyone by getting rid of Kauai's Terrorists. The Uncles, Aunties, Papas, Tutus, and the rest of Kauai's Mafia.

How long will it take to clean the Coco Palms site and who will do it?

No Bid Contract- Probably some Croony Cashing In.

Duddy should have built a hotel in Haena. It would have been decades before the County did anything about it.