Musings: Ode to a Swarm

A swarm in June is worth a silver spoon. – Old proverb

It was by sheer chance — or maybe fate or intuition-followed — that I was out in the yard and got the idea to check the bees, which is why I was standing there when tens of thousands of them streamed out of the hive like a funnel cloud and exploded above me into a swirling, whirling, buzzing swarm.

They were moving so fast that I could see little tracers behind them — tiny chem trails, if you will — which made them seem as large as dragonflies. Darting here and there, in a seeming frenzy, yet never colliding, they hovered in a whirring cloud about eight feet above the dirt driveway that runs alongside my fence.

Transfixed, I watched, wondering how long they would stay there, curious about what they would do next, hoping no one would soon need to use the driveway. I felt sure they would head for the inviting thickets of albezia trees in mad flower.

But to my surprise, they began moving back into my yard, just inside the property line. I lost visual, but not not audio contact, and followed the buzz to a mango tree. Neck craned, I searched, spotted them covering a high branch like rough creeping bark. Cool.

A mango fell past my face. I reached out and caught it. First of the season. Perfect. Wow. Mahalo.

Eager to understand, I retreated to Google. I quickly learned what I might have done wrong: waited too long to add a honey super, let the brood box get too full, failed to destroy the swarm cell — a peanut-shaped piece of comb that produces the queen that sparks the split. Either the old queen goes with the swarm, or they fly off with a virgin queen. I wonder which scenario just took place in my hive, how they decided who stayed and who went.

I also learned that it's a perfectly natural event, a way to ensure vibrant genetic diversity, the sign of a healthy hive, and some hives will swarm no matter what you do. Some people think of a bee colony as a single organism — it certainly functions like one — so if you look at it like that, a swarm is like having a baby.

And now the vulnerable baby was looking for a home. Though swarms can seem spooky, they're typically not dangerous because the bees have no brood or honey to defend. They depart with nothing more than a good meal in their bellies and each other, which, given their industry and ingenuity, is all anyone would ever need.

I also learned that once they swarm they tend to cluster, typically near their hive, and from there deploy scouts who will check out new homes, sometimes a mile and a half away. As they find suitable domains, they return to show other scouts, waggling fast to convey enthusiasm. The scouts must reach consensus on the prospective hive, a process that can take hours, or days.

Hmmm. If only I had a swarm trap, I thought.

Wait, I do, or at least something that will work just as well: a nuc-box, a mini-hive that looks kind of like a bird house. I put a couple of frames with drawn honey comb inside to give it that reassuring homey smell, and placed the box atop a ladder directly beneath the swarm. For good measure, I rubbed a bit of honey onto the landing board, adding that alluring scent.

Though the box was immediately noticed, their decision was not hasty. The scouts were dutifully doing their rounds. I caught them checking out a shed in the backyard and shooed them away, wondering what else looked appealing. Hopefully nothing at a neighbor's house.

I spotted my nearest neighbors in their yard, told them to keep a look out for a swarm. They were not afraid; in fact, they'd seen it when it was in the driveway, the husband alerted by the distinctive sound. So beautiful, said the wife. The husband said he'd seen a black cloud of bees race across the sky from the west a few days before.

I told them I was hoping the bees would be attracted to the box. Let's think positive, the wife said.

Through the afternoon I made regular trips to the box, watching as more bees arrived to inspect it. Some cruised the interior, a few did a vigorous waggle dance. Still others came and did the bobbing bit in front, which is how they orient themselves to the hive, set their GPS coordinates, so to speak. It all seemed positive, yet the swarm stayed put.

Toward dusk, I spotted another neighbor, showed him the treed swarm. I've got a 24-foot extension ladder if you want to try and get them before dark, he offered. I dismissed the idea as dangerous and doomed to fail. I preferred to wait, see what they wanted to do.

At dark, the swarm had not moved, though a few scouts seemed to be sleeping over inside the box. I slept, too, in my own much larger box. Before dawn, it rained hard, though not for long. I worried briefly about the bees, reminded myself that they're wild animals, know now to handle the elements.

At first light I checked and the activity level was already brisk. I was pretty sure they'd made the decision to move in.

I had to be gone for most of the morning, but as soon as I returned, I made a beeline for the box. I heard the buzz well before I saw them massing on the landing board, hanging from the entrance in a behavior known as bearding. 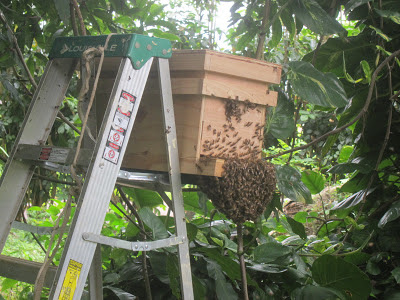 Over the course of a couple hours they slowly fitted themselves into the box, in their thoughtful, orderly, efficient way. Immediately they were busily darting in and out, collecting nectar and protein-rich pollen, building the stores that will support their new life.

The next day, the foraging activity had quickened, a good sign. I carefully opened the box, and it was pretty solidly packed with bees. They'd already begun drawing comb on the frames. I slid in two more frames, and another one that had been in the freezer, still smeared with honey from last year's extraction. Just the ticket for a hungry hive that's all about new life.

I saw my neighbor in her chicken coop, called out the good news: The bees went in the box, and I'm pretty sure they're here to stay.

She beamed. “Oh, now see what happens when we just think positive.”
Posted by Joan Conrow at 8:16 AM

Great story. I love your love and enthusiam. You are the perfect bee mom.

Thanks for the good read.

I am just wandering if those bees have the proper Kauai permits to take up residence there. lol.

We have had swarms almost every 3 years. The first 3 swarms chose to live in our house in various places.

I was outside doing yard work one day in May, when I heard a loud whirling buzz and expected to see a green harvest helicopter above me.......but not!

The sky went dark on me. I was both fascinated and fearful. Horror films with attacking bees buzzed through my mind in a flash back to my days as a child watching a Saturday summertime matinee.

Thanks to Jimmy Torio, Alan Spencer, and Mr. Shagnasty......they were removed without too many casualties.

Now thanks to Jimmy Trujillo, we have a nice bee colony that pollinates our fruits and veggies.

What a sweet story Joan ;) Nothing better than being able to watch the baby grow.

wow what a great story, thanks for sharing. I really enjoyed reading it.

That was a great story to hear today. I spent most of the day at Wilcox rebuilding a radio repeater used for emergency communications (along with three other volunteers from the Radio Club) and the rest at Civil Defense planning monthly radio equipment tests. After spending a day in considering disaster, well-written considerations on the natural way of things was very welcome.