I can't wait for 2014 to be over! more than one friend has exclaimed today.

Yeah, it's been a rough and tumble year in many respects. And just think — it's almost pau.

Still, you'd think a lot of folks were rolling in the dough, considering how many were called “corporate shills” after supporting GMOs or criticizing the anti-GMO movement. Except I'm pretty sure most are still waiting for that paycheck... 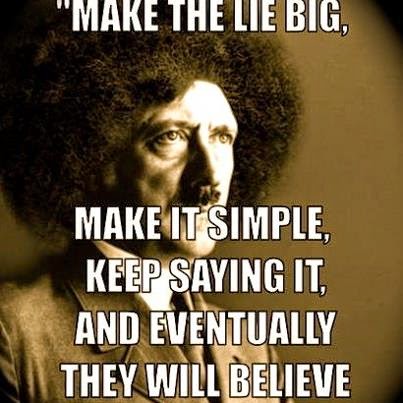 The Star-Advertiser is continuing its series on illegal vacation rentals, like it's some big expose extraordinaire. Though you'd think they might have gotten a heads up when President Obama stayed in an illegal TVR in Kailua a few years back.

Speaking of which, it appears that Ray Songtree, who spoke out so stridently against KIUC's smart meters, demanding more transparency and accountability from the utility cooperative, has an illegal multifamily TVR on the road behind the Wainiha store. According to his VRBO ad:

We have three spaces available, all for couples or possibly three adults or a small family in the one called Dawn Studio. All have private kitchen, private entree, private balcony, private everthing, internet (ethernet), and great views.

His FAQ link elaborates further on the illegal multifamily aspect:

IS THIS ONE HOUSE OR SEVERAL? This is one long house with all rooms sharing view to south. Each space has a private entrance after coming up stairs (or elevator for elderly).

The revelation prompted a friend to note:

But at least he's consistent in his paranoia, warning prospective guests:

Washer (with detergent included) and Dryer for laundry  is located at top of stairs,   beach towels,  cooler, charcoal barbecue, iron and ironing board, hair dryer,  dvd, cd player, cable tv, ethernet direct internet, (wireless is dangerous, see www.bioinitiative.org If you have notebook or Ipad, we do not have dangerous wireless modem in house so you will not have internet unless you have an ethernet port on your device) and beach equipment.

There is a scanner in Lihue. Thou [sic] the "millimeter" scanner is supposed to be safe, that is what TSA said about the other scanners. I definitely reccommend [sic] opting out and taking the pat down because of radiation safety issues. If this is new to you, just do search for TSA airport scanner safety alert . Babies or young people who want to have children should avoid scanners.

Ray also makes it clear that he expects his guests to adhere to high standards:

I am as alternative as can be, but I believe in discretion and wholesomeness. I would like to hope our place is supportive of traditional family bonds. I use words 'traditional' and 'family' and 'honeymoon'  in historic and biological sense.

Yeah, what's a little zoning violation when you're fighting the double scourge of WIFI and gays? 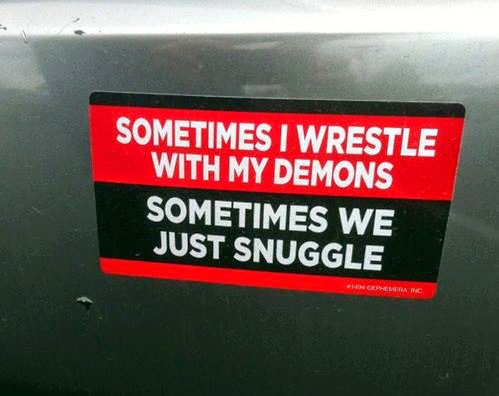 A friend expressed doubt that the Hawaii Tourism Authority could really be surprised that the number of illegal TVRs is so high. They know how many people are coming to the Islands, and the total inventory of visitor accommodations, so weren't they even a little bit suspicious when the numbers didn't mesh? What, did they think the tourists were staying with relatives? Or maybe under the Wailua Bridge?

Meanwhile, HTA officials are waxing enthusiastic about the uptick in visitor spending, even as the overall visitor count to the state slipped a bit. So apparently visitors are being gouged a little more for the same experience.

The Garden Island quotes Chamber of Commerce Director Randy Francisco as saying “The Kauai Visitors Bureau and partners are focused on projecting the island as a place to relax, rejuvenate and reconnect.”

Unless you're a resident. A friend who lives on the North Shore said the visitor activity has been insane this holiday season, causing massive traffic jams in Hanalei and bad vibes on the bridges. Every time her kids go out they return bummed, until one day they finally said, now we know why you always stay home.

Another friend, born and raised eastside, was talking about how Kapaa is looking like a scruffy border town these days, and the traffic is nuts there, too. I'm grateful for what I have, he said, but you can't help but lament what was lost. 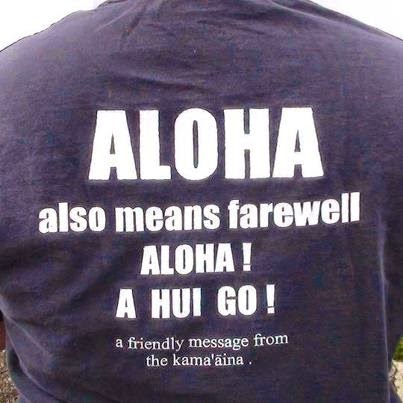 And yet another friend sent an email after traveling through the Lihue Airport to the mainland recently:

Joan, News Flash:  the security body scanner workers at the airport were just as mean as ever!!!!  No one and I mean no one, is shocked by that statement!!!  The whole airport was dour - but to be fair, it was 10 at night! The airport IS a great job (don't have to kiss ass for tips) for locals that resent us.... AND I get why they do!!!!  I resent us!!!

I know it's a hard job, and it's stressful because of the holidays, and we all think our jobs are soooooo fucking important….

Back to da scanners;  They really were consistent with their goading and encouraging visitors into doing the wrong things by giving misleading directions, so they can in turn make them feel like idiots!  I can be a pretty tough old broad, but they were successful in making me feel stupid!  If I didn't live here.... I WOULDNT come back here!!!

If the visitors bureau put as much energy into aloha training as they do encouraging vacation and car rentals, we'd be just fine on the tourist track, without TVRs and more cars!

After 35 years of being part of a community on a Kauai, I do know this: On the bridges, on the roads, at the airport......Nobody wants to NOT know what they're doing.  No one wants to be an idiot.

A reminder to myself that as an ole local Haole, I don't want to ever treat anyone, like those scanners treated people that night.

Happy New Year! And thanks, everyone, for reading and being a part of Kauai Eclectic. Because you CAN handle the truth! 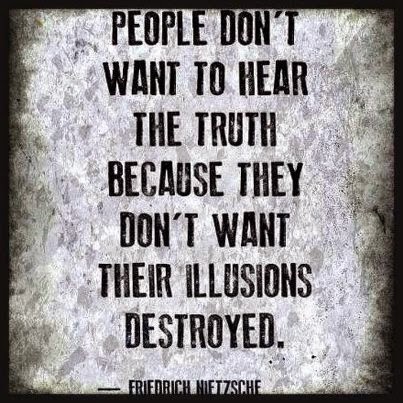 
“And those who were seen dancing were thought to be insane by those who could not hear the music.” Friedrich Nietzsche “Life can only be understood backwards; but it must be lived forwards.” Søren Kierkegaard

May 2015 be a better year for all.
And Ms. Joan, Thank you for your blog.....it inspires. And tho' at times you appear to be a lone voice, your voice is respected and admired by many. Thank you.

Mahalo! And I love your quotes!

But that TVR means that three lucky heterosexual tourist couples won't get smart metered to death, although they might start fighting if one of them uses a cell phone. Who would possibly want to stay there? Cray cray. Maybe its part of an insanity defense for the illegal TVR charge. Wonder if KCCC has a smart meter.

Why not do a story on the Green Energy Power Plant in the Albizia forest at the Knutzen Gap.

Was there an EIS?

The wood burning smoke stack will be polluting the air 24/7 365 days of the year accept on scheduled maintenance down times.

It would be an interesting topic and something worth investigating.

Imagine breaking news on the Nazi and Towel head secret investors and the ties to the big dogs on Kauai (prominent names).

11:43 -- I have written a number of posts about the Green Energy plant. It's no secret that it was funded heavily by German (and they aren't all Nazis) investors. An Environmental Assessment was conducted, and the project has a very strict EPA air permit. It's actually produces fewer emissions than the Port Allen plant.

I must say that the security at the Lihue airport is the worst in Hawaii, Seattle, LA etc. it is not dislike of visitors or haole. it is simply surly without any consideration of the traveler whatsoever. Last month my TSA preapproval was unilaterally discarded by the checker. I must have done something to someone he knows sometime. All of the TSA people are miserable. I am told that is becausebthe boss is a miserable person. The best at the airport is the older Clint Eastwood look alike. He is a real pro. The worst the older fat haole woman with the smirk who loves to send shy women into extra screening.

Nazi and Towelhead? Racist much? sheesh.

is that anything like a wetback, or a mainland f ing haole redneck cracker idiot racist which you so probably are?

More of the same, just more in your face about it.

Have fun, kids, your gonna need a good laugh before this next year is over.

Not more than the way those racist pricks have treated me in all my years in the states.

And don't ACT like you aren't prejudice or haven't felt or said anything racist in your life.

If you know anything about the Nazi's and the Towel heads that want to KILL and Destroy anything and everything that they HATE then you might understand my dislike for these radicals.

STOP pretending that you live in such a wonderful world and educate your ignorance. They're radical groups all over this world, the US, the state of Hawaii and on the island of Kauai.

Ever heard of the Holocaust or WWI or WWII?

How about Jihad and the words and actions of Muhammad and the Quran?

Stupid, lazy, and ignorant people like you have never served this great nation but you want to drink your alcohol, smoke your smokes, read your magazines, and enjoy your entertainment without understanding the threats that are out there.

Both of them? Sweet Jesus on a Kaiser roll, that’s the screwiest idea I've ever heard. Even if you could get them to share the same bunker, how would you explain all the guys in SS uniforms hanging around whining "Wo ist der Fuhrer?" The 24/7 towel deliveries? The schnitzel-stuffed fanboys in their "I’m Hawt for Eva Braun" t-shirts? The Al Jazeera news crews wanting an exclusive?

Dolphie and Binnie bunking together?! Good Lord. 6:29 PM needs some serious rethinking of his hyperboles. Followed by a CAT scan.

My allegiance is with the United States. I am a Patriot.

What say you Mr Know it all?

Dawson gets my vote for best post on Joans blog....EVER!!!!

I'm simply...laughing till I cry. Awesome!!!