A cruise to the North Shore revealed a proliferation of Barca and other political signs are still marring the beauty there. Come on candidates — especially those of you who profess to “malama da aina” — take a run of the island and remove what is now illegal opala. 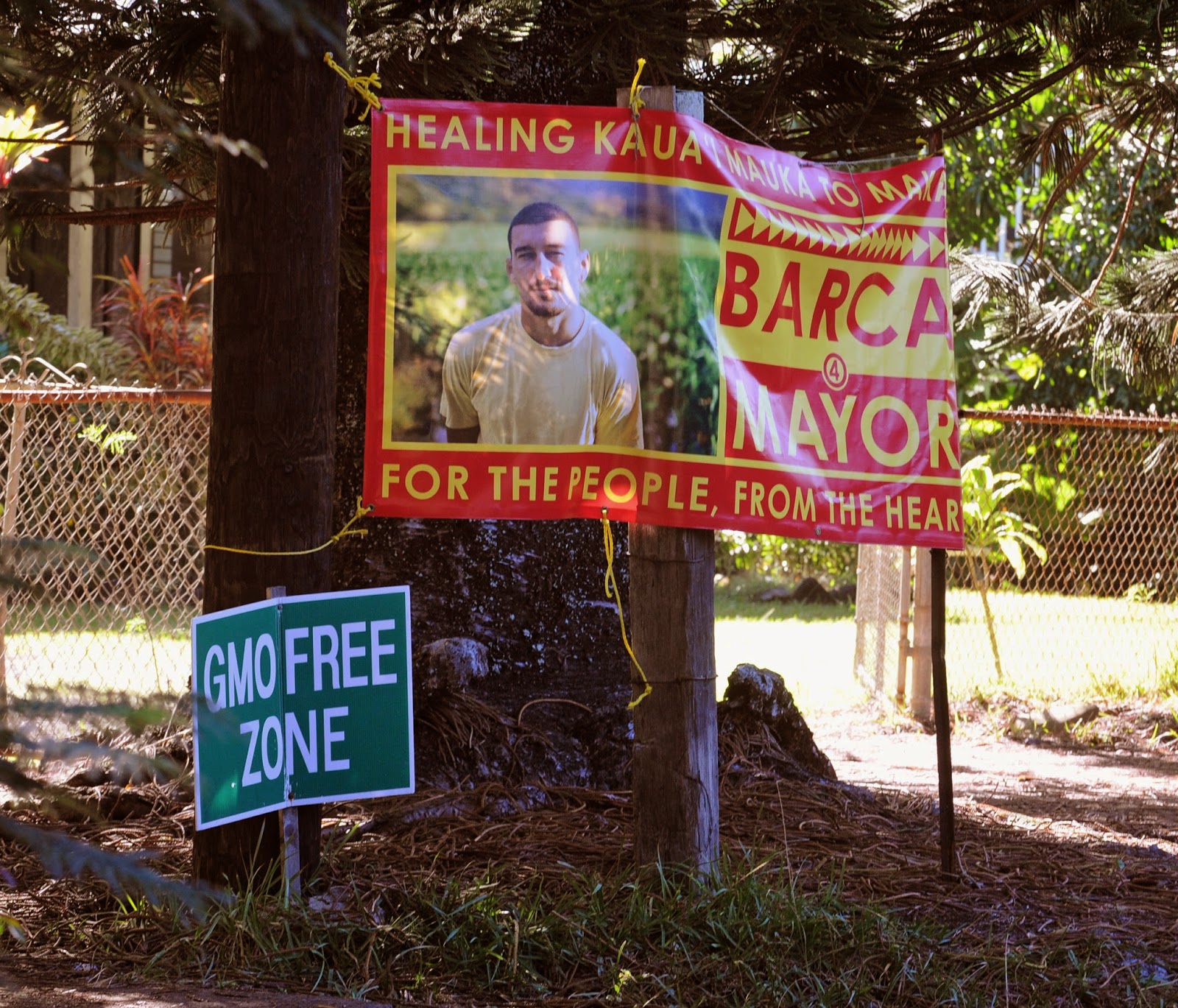 This one, with the signs of losing candidates juxtaposed as they are between rubbish and recycling bins, tells a story all its own. 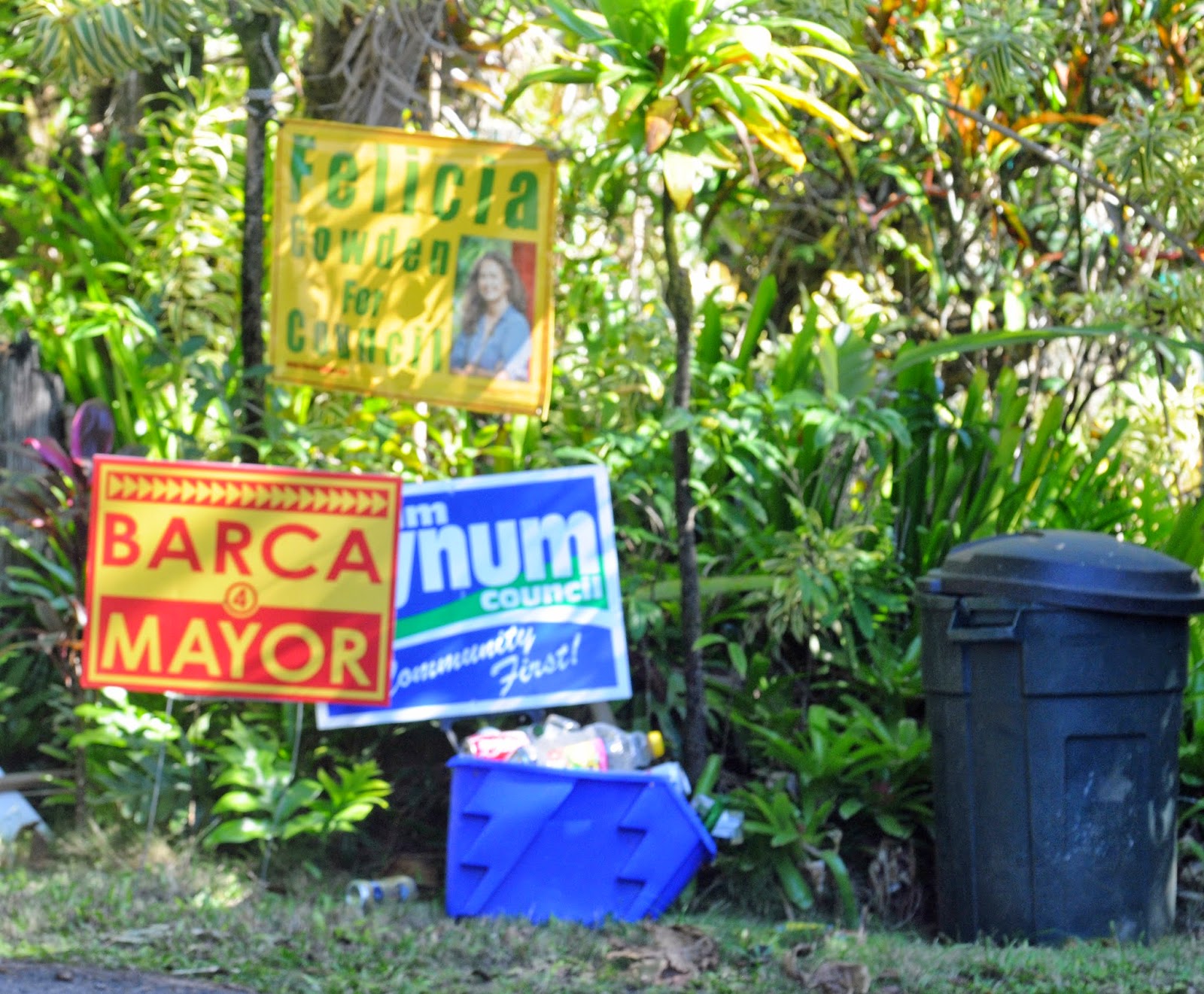 Speaking of recycling, the particularly persistent — though still officially unconfirmed — rumor report is that Mike Tresler is going to be returning to his old position as county Director of Finance. If only the county were as successful at recycling household waste as it is employees, the landfill would be a lot smaller.

While we're talking hana hou, anti-GMO icon Vandana Shiva will be returning next month for the opening of the state Legislature and a trip to Maui. What, again? you're asking. Yes, again. And don't forget, she charges $40,000, plus first class airfare, to foment folks with her particular brand of propaganda. Mainland funders pick up the tab, though you'll have to pay $45 to attend the cocktail “talk story” reception.

She'll be joined again by Center for Food Safety's Andrew Kimbrell, though this time they've slightly shifted their mantra to ”home rule.” According to the CFS press release:

More than anywhere else, counties in Hawaii should have the right and authority to determine the future of their food system. This is home rule.

Like anybody is stopping folks from growing food or determining the future of food systems in the Islands. It's not home rule that's the obstacle to more local food production, it's home work. As in it's hard to be a farmer, especially a successful one.

But don't worry. Keone Kealoha has it covered. Hadn't you heard? Under his stewardship, the long-stalled, 75-ace Kilauea ag park “will serve thousands of residents on Kauai as a regional food hub assisting Hawaii’s shared efforts to increase food security, preserve rural character, provide viable, agriculturally based economic development with a long term vision to provide our youth with rewarding jobs and skills in agriculture.”

He was on Hawaii Public Radio today, talking about how local food production is a “more reasonable” use of the land than growing GMO seeds. No doubt. But talk is cheap. So once you get those 75 acres up and running, Keone, come share your plans for converting the thousands of acres currently in seed production. Or better yet, get some of the ag land the seed companies aren't using into production. Like maybe the ag CPR lots with fancy houses that have proliferated around Kilauea?

Food production and seed cultivation are not incompatible. In fact, I'd be willing to venture the seed companies are producing more food than the “antis,” what with their subleases to ranchers and veggie growers.

The Foodie Farmer blog had an interesting post on the “top 10 annoying words about agriculture." You've heard them all on Kauai, whether the discussion is seed companies or the dairy, words like "big, factory, industrial, douse, pump, corporate, GMO/Frankenfoods, superweed, shill and agrarian."

"Pump" really goes in line with the word "douse" as in every thing farmers do, we're believed to do to the excess. Any good business person will tell you that makes no sense whatsoever, but I suspect most of those who throw these terms around have never run their own businesses. Its easy to criticize someone's business when your paycheck is funded by "unnamed donors" to a non-profit.

My favorite bit of agrarian hyperbole was the comparison between cow manure and visitors that Poipu resident Steve Lauryn drew in a recent guest editorial:

The Boeing 717-200 aircraft that Hawaiian Airlines uses to bring visitors to Kauai every day has a max takeoff weight for people and cargo combined of 42,000 pounds. The solid waste output alone (not counting urine) will be the equivalent of 2,400 Boeing 717’s—filled from bulkhead to bulkhead —if you took the seats out and used the cargo area below—full of manure….every year, on 578 acres, with no plan to haul any of it away. Personally, I’d rather see those planes packed with visitors.


Because we all know cows don't spend. And visitors, of course, don't produce any waste. Not even 2,400 plane loads full of 'em.
Posted by Joan Conrow at 6:48 PM

it is rediculous to give keoni the kilauea ag land. How much land did he work on with common ground and how much of nothin did he grow there? so much bullshit

The Kilauea Ag Park has been smooth sailing from the start. Perhaps 30 years ago this park was dedicated as fruitfall from SeaCliff. Back then JoAnn was a whole lot younger, but this was her baby. A real trade off from the Ag Estate guys as a "gift" to the community. JoAnn did such a good job....shucks, now the Ag estates are selling upwards of 20 Million and there ain't no water for the 75 Acres. There ain't no plan. Keone Kealoha is well spoken and smart, but he will find, that after he gets rid of the only "product" the Kilauea Ag PArk has produced, perhaps a couple hundred tons of Opala, cars and assorted junks...and after he gets WATER ...his real work will start. Who gets the plots, who will work the plots and what do you do the failed plots.....a real social rupture will be arising....Ani't Ag fun....and not one word on who will pay the insurance for the inevitable accidents....remember, we are still in the Tim Bynum Era of sue anyone for anything....something will stick. Yes we have no bananas today.

I love my Barca sign even though I didn vote for him cause he is dumber than a bag of hammers.

Have these people become so divorced from farming and raising their own food that they forget what cowshit is?

All that comes to my mind is childhood memories of shoveling trailer loads of the stuff to spread on the huge vegetable garden my mother planted every year. Well, it was usually horseshit from a local stable, rabbit shit once, but the effect is much the same.

looks like there's still a little poison left in the pen!

that land could have been planted in orchard, watered with the natural rain and we'd have a food forrest there now, giving it keoni to manage, wtf?

and since it is christmas, you can sing this one, and a baby for each girl who comes to work for Keoni,
will the county be respomsible for paying for the next kid he makes with the next worker he hires? Special skills needed, must like the boss.

It's amazing how people demand farming, agriculture, and sustainability, yet bitch and moan about the cow waste. Really? You want meat and milk, you need livestock. That's just how it works. And even if you're an herbivore that doesn't consume any meat or milk, you'll still need some of that cow shit to fertilize your veggies. Maybe I'm out of the loop, but I haven't yet come across any magical livestock that shit rainbows and glitter.

Ahh, yes, you wonder where is that wonderful world of skies of blue, and rainbows too? Haha!

but today there are no rainbows or sunny skies just a whole lot of rain and alot of wind and chill and alot of visitors who wish they were staying in a hotel with something to do and fancy restaurants rather than in their flooded vacation rental with the cesspool flooding all around them.
Wonder how many visitors will be stranded tonight, unable to get to their north shore vacation rental? Or how many will be stranded unable to get to or from the airport.

well i can see that the Christmas spirit has reached each and every one of you. Does peace on earth, and goodwill on the blog still sound doable? tomorrow, and at Christmas, lets all put our differences aside, and just for a few moments, just.....breathe.

Think not a single negative thought about anyone and anything. For at least five minutes. and that includes all sides. Everyone.

See if each of you can do that. My Christmas and NEw Years challenge.

Aloha, and Mele kalikimaka a me Hauoli makahiki hou.

There were plenty of rainbows today. All ya had to do was look up, they were there.

I remember a few years back when our former Gov Linda preached for home rule, look where that got her.

Dear rainbow dreamers, while rainbows delight on a regular basis, yesterday was full on dumping rain, and no rainbows. Waterfalls galore, beauty abounded, but rainbows need sun and rain, so it is not a problem of not looking up.
At best, you were dramin through the delightfully stormy day.

Rainbow schmainbow.
Yeah they're pretty and all but They don't make Kauai any more special than Shenzen or New Jersey.

It is cold and windy out there. Thanks be I can still use my fireplace before Joanne makes it illegal.

Wow, interesting how 8:12 about blue skies and rainbows struck a sensitive chord? It appears that it was just an allusion (and illusion) of some who live in a la-la/romanticized world, unaware of their hypocrisy?

Lighten up & peace on earth!

Merry Christmas Joan Conrow.
Thank you for your blog. This is a gift to Kauai that gives and gives.
Best wishes to you and may your pen forever be sharp.

Mahalo 9:48! Thanks for reading, and a very Merry Christmas to you, too!