If the inaugural meeting of the Kauai County Council meeting was any indication, it's going to be a scratchy two years for that panel.

Or as one observer described it, “a shit show.”

JoAnn said she had planned to vote for Mel as chair — until he refused to give JoAnn her way, which would be to keep defeated Chair Jay Furfaro's rules in place until Mel's proposed new rules could be hashed out at great length.

JoAnn, who is known for her protracted – some would say ad nauseum — comments, said she was concerned the chair would be limiting Council debate and discussion. But is that necessarily a bad thing, when Councilmembers blather on and repeat themselves?

Gary, who characterized the rules as anti-democratic, showed how democratic he is by employing a bit of blackmail: If Mel agreed to put off a vote on rules for two weeks, he would support him as chair. Otherwise, he wouldn't. Like Mel needed Gary's vote.

Councilman KipuKai Kualii came to Mel's defense, saying voters had told them they wanted the Council to “be more efficient, get more business done in our meetings and be more fiscally responsible.” For JoAnn and Gary to talk stink about Mel “lacks aloha, especially on a day like today.”

Ross Kagawa, who was elected vice chair, said he also was “quite disappointed by the statements. Councilman Rapozo has a lot of respect and experience speaking for the small guys.” Both he and Councilman Mason Chock said they'd be willing to discuss changes to Mel's rules in the future if people have concerns.

Mel said voters had told him “they'd stopped watching the meetings already. It goes on too long, people ramble,” and when the meetings drag on, they become very expensive. Mel also objected to claims that he was trying to reduce public testimony time, noting that citizens in Honolulu, Maui and Hawaii counties get just three minutes to speak, while his rules give Kauai folks six minutes.

And he flat-out rejected Gary's claim that the new rules would limit his ability to put bills on the agenda.

“To insinuate I would withhold a bill for the Council that's legal and defensible is unfair,” Mel said. “Because I would never do that. It's all about building trust.”

In the end, everyone voted for Mel and his proposed rules, except JoAnn and Gary, who were left out in the cold.

Mayor Bernard Carvalho Jr.. meanwhile, signaled a conciliatory approach with the Council. Using the metaphor of a hukilau — cooperative fishing project — to express the need to “move forward in harmony,” he spoke of joining Mel and Ross to “bring the bountiful catch to shore together.”

Contrast that to this paranoiac post from defeated mayoral candidate Dustin Barca, who discovered, all of a sudden, that nobody really cares what he has to say. Or maybe the whole anti-GMO thing is running out of steam? 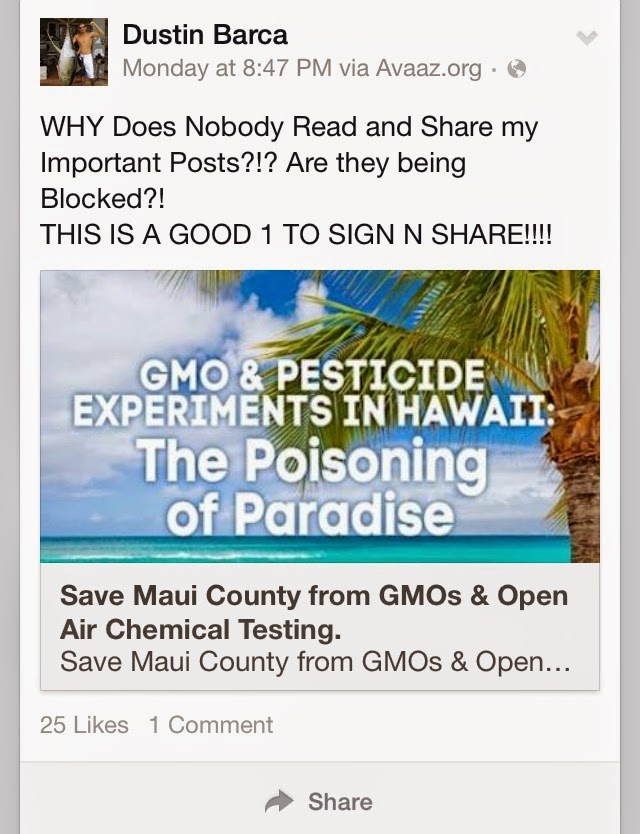 Meanwhile, the oft-touted ideal of a small, sustainable family farm is moving further from reality as agricultural technology advances.

As an article in the New York Times points out, family farms are surviving by getting bigger and embracing the kind of technology that only the largest operations can afford:

Equipment makers like John Deere and AGCO, for example, have covered their planters, tractors and harvesters with sensors, computers and communications equipment. A combine equipped to harvest a few crops cost perhaps $65,000 in 2000; now it goes for as much as $500,000 because of the added information technology.

The technology helps the farms to be more productive, which helps them successfully compete with giant agribusinesses. It also allows them to more accurately plow fields and apply fertilizer, water and pesticides only when and where they're needed — all of which benefits the environment.

A prototype weeding robot, which may use “infrared data to help identify weeds it then plucks” could be in the fields next spring, helping to reduce pesticide use.

But the drones, sensors, self-driving tractors, GPS satellite data and cloud computing are most cost-effective when applied to single crops grown at the largest possible scale, which isn't conducive to crop diversity or small-scale growers who are being left behind as farm technology surges ahead.

The story profiles Kip Tom, a seventh-generation Midwest farmer whose family's holdings have increased from 700 acres in the 1970s to 20,000 acres today. Some of that land has been acquired from other family farmers that couldn't hold on.

His 84-year-old mother adds another perspective:

“Too many people don’t think farming is a business,” Ms. Tom said. “When we were first married, I told my husband, ‘You don’t ever go to town dirty; that’s what those people think farmers are.' We’re a business, and if you don’t keep up, you get left behind for good.”

Note to Gary and JoAnn: Government is a business, too.
Posted by Joan Conrow at 12:32 PM

I am SO tired of Joann and Gary acting like they are the only ones representing the people. The election results show otherwise!!

Mel, make them follow the debate rules. Don't let them bog down in incessant bickering. And cut taxes and no more hiring.

Kipukai took the opportunity to shine and he did! I was very impressed with his gently way of putting Gary in his place. Mel lead with strength. It was inspiring and so needed when your dealing with Joanne and Gary and there games and tactics. Gary and Joanne both met the expectations of being petty,unimpressive, and so boring. Mason seems like maybe he is wriggling out of Gary's grip. We can all hope! The ceremony was beautiful and I think even though council was full of red colored theatrics (joanne in her red dress and Gary wearing his red face) I think it's going to be a very productive and inspiring next term. And I love how Mel doesn't take any crap and sees straight through the Hoosimura b/s.

Council meetings? Is that what they were? I stopped watching the "Glenn Mickens" show a long time ago!

I would gladly pay the countil their full salary to NOT show up to work!!

Perhaps the Council could treat each other with the common respect that people use when meeting for the first time. Manners and and expectation of truth.
Their first job is to cut the budget. Hopefully starting with the startlingly expensive and poorly managed BUS Service. The County should disband the Bus service completely. It serves the fewest people and has the highest cost.
Eventually, the County will be forced to outsource many services...Park maintenance, Trash pick-up, Road repair etc.
the writing is on the wall.
The County's bond rating is in jeopardy, big time.
There ain't no money, folks. we spend more than we bring in....and we are not even accounting for the huge retirement and medical accounts for County workers.
Plus there are hunnerds of aging surfer dudes who will need free housing and medical in a few years...Cowabunga.

As irritating as Joanne and Gary can be…..I am so happy they are there for some sense of balance. I think it is important for Mel and his munchkins to know they can’t just sit back and change the balance of power on their own. As far as I am concerned - Joanne can keep testing Mel forever! You go girl!

Almost was fooled in thinking Mr.Hooser's last shread of decency he had left in him would be to support Mel. But he remained true to his character.
Someone else mentioned how red he was...listening to the Hukilau concepts the Mayor was sharing...was making Gary uncomfortable. Why? Because the world according to Hooser must have a result that is only beneficial to him.

Here is a very perceptive article about family farming in Hawai'i. What do you think about this article, Joan? - http://www.civilbeat.com/2014/11/small-family-farmers-can-be-relatively-wealthy-in-hawaii/

Simon Russell may be able to grow vegetables but he is clueless about markets and economics. To think that increasing demand for locally grown food will cause the price to fall is downright ignorant. His whole idea is for us to give him land on a lifetime rent-free lease that he can then acquire ownership yet we have to pay him money to do....this guy needs to stay off the weed and guilt dreaming that we want his food that bad. Geeezz!!

I think that headline has it backwards. It should read "The relatively wealthy can be small family farmers in Hawai'i."
The rent or purchase of land costs money.

And it takes a breathtaking level of entitlement, to propose that someone else (as in, me, the taxpayer) should have to pay to rent or purchase farmland for the farmer, so that the farmer can have land for free. I've heard of big requests from other industry unions before, but that one takes the cake.

“To insinuate I would withhold a bill for the Council that's legal and defensible is unfair,” Mel said.

The key words are "legal and defensible." Gary knows his bills are neither, so he knows flawed bills like 2491 will simply be tossed after the County Attorney details their illegal and indefensible content. How can Gary raise money for his HAPA "nonprofit" and for his "friends in the legal community" if he can't push illegal bills through?

Privatized Parks maintenance, I say. I'm sure cheaper and will be maintained better. Job for the Mayor and Mel to see just that.

I watched the meeting yesterday on Hoike. Joann and Gary you folks are an embarrassment. Joann you are just irritating. I guess some things never change. Just saying...