You know the Hawaii media scene is in dire straits when Civil Beat laments the loss of Hawaii Reporter and its “independent voice.”

Of course, it wasn't exactly independent, because it was funded for a time by the conservative Watchdog.com, and its coverage was similarly skewed. Which is why it's no surprise that its founder, Malia Zimmerman, is headed for a gig at Fox News. But Hawaii Reporter was, at least, a different voice.

Still, Civil Beat's dirge on Malia's departure begs the question: Why doesn't Civil Beat do more independent investigative reporting? Its got money, reporters, editors. Yet its coverage overall is tepid, and it rarely departs from the Star-Advertiser/TV news lineup, other than to offer news flashes like “the cost of living is really high in Hawaii because land is so expensive.” Ya don't say....

Independent Kauai journalist Jan TenBruggencate has written back-to-back posts on the GMO issue that are worth reading on his Raising Islands blog. One post delves into how even though the agrochemical companies get all the attention from activists, they're just one piece of the biotech pie:

But around the world, the genetic modification techniques are being used to solve regional and small-crop issues—and the work is being done by regional and local institutions. And some of is being done to solve major global nutrition issues—without a profit motive at all.

What, no profit motive? Gee, that makes it hard to dismiss the technology as the devious work of evil corporatists bent on ruling the food supply, and thus the world, doesn't it? Don't you just hate it when facts mess up a perfectly good social media meme?

His second post debunks another myth linking GMO wheat to gluten-intolerance and celiac disease. Except there isn't any GMO wheat commercially sold in North America. Oops.....

Someone left a clever comment on a post I wrote last week about the push to kill the Mahaulepu dairy, which includes a lawsuit by the Hyatt claiming its guests will be forced to endure biting flies and an unbearable stench:

Bad for marketing if the Hyatt loses. Will they tell their guests what they say in the lawsuit?

On a related note, I heard that an Aha Moku meeting, held last week to select a moku representative for Mahaulepu and establish a position on the dairy, attracted about 60 people, including 15 guys wearing tee-shirts with this slogan: 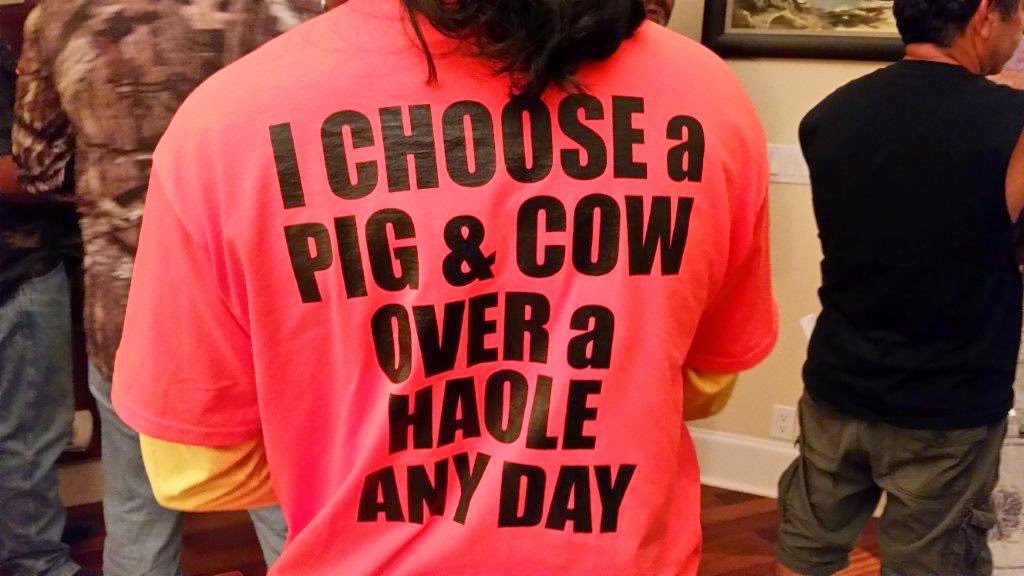 Needless to say, the meeting got tense when the dairy opponents met their opponents.

Meanwhile, folks are gearing up for another fight. This one is over the proposal to build HoKua Place, a 769-unit housing project on 97 acres above the Kapaa Middle School. The developers are seeking a land use amendment to change the designation from agriculture to urban, claiming the site is close to schools, commercial centers and other urban amenities.

Yeah, but to get to those services you've gotta drive on Olohena Road, a narrow dangerous two-lane strip of pavement that feeds into Kapaa town and the bypass road. Add cars from the HoKua Place project to those that will be generated by Coco Palms and the two new Coconut Marketplace resorts and the question becomes: Just how many cars can be dumped into the Kapaa-Wailua corridor before traffic comes to a complete standstill?

The developers are rarin' to go, seeing as how the “housing market is poised to right itself.” The EIS preparation notice further enthuses:

The historically low level of permitting activity indicates there will be little or no competitive interference in the short run to this project’s offerings coming from other housing development on the island. The Market Analysis notes that these expected prices, particularly the affordable ones, are below the historical trend for Kauaʻi housing. Thus, sales are expected to start up strongly.

Also planned are a 3.1-acre park adjacent to the school, where the county could relocate the Kapaa swimming pool, and a 1.4-acre commercial parcel for a “country type store and small personal service types of uses.” Another 1-acre parcel on the makai side of Olohena would be either more commercial, or police and fire substations.

But other than two bus stops, and a bike-walking path from the middle school to town, the project offers no road improvements other than a “channelized intersection on Kapaʻa Bypass Road.” Which means a souped-up roundabout.

Surely more should be required than that. And when, exactly, are the county and state going to look at the big picture issue of Kapaa traffic?

Though the developers describe the project as “rural-like” and “sustainable” — two meaningless phrases — the call to action against it is characterized as “maintaining our Kauai rural lifestyle, which is severely threatened at this time.”

What caught my eye was a request that the EIS “should include include social, emotional and community impacts before it goes any further.”


Emotional impacts. Now that's a new one. But as we've seen with the anti-GMO and anti-dairy movements, emotions are becoming an increasingly important component in land use issues. They're hard to measure, and perhaps impossible to mitigate, especially when they reach a certain fever pitch.

And they're definitely not going away.
Posted by Joan Conrow at 9:16 AM

Kauai does need housing....but 800 units exceeds even the most sharp toothed developers dreams.
The developer is obviously asking for triple what is a reasonable number of residences. The mixture of lo, mid and hi-end homes is a joke and a half. Three hundred turn-key 1400 sq ft homes is the max that should be allowed. With a sales price of $450,000 max Including all septic/sewer hookups, driveways, water heaters etc. Now is the time for da Hoos, his Munchkin, Mason and JoANN to force the developer to put in PV for all electric.
There are many issues IE private water to a county tank, traffic at the by-pass and then the belligerent attitude of the developers representative. He needs some people skills.
The developer will get by the traffic issue by asserting that the private sector should not be forced to do major roadways,,,,except, THIS PROJECT IS ASKING FOR LAND USE CHANGE and high density. The LUC (Land Use Commission) can just deny based on the traffic overload. Just deny, they can, and maybe they will.
After the LUC this project will go thru Planning and Council who will be able to overhaul ANY and All approvals by the LUC. These two groups can be tough. But as the developer indicates, he has the Planning Dept in his pocket, he must drink down at that Beer Place on Rice Street, The Beer Place, where the insiders, meet greet and decide. Suds and studs.
The heavy breathers are already lining up to oppose this project. For the first time in my memory I may just join the Antis. This project as proposed sucks the big one.

I understand the sentiment, but the shirt is racist.

I had no problem with the dairy, until I saw those shirts. Now I see that the pro-dairy crowd has such little respect for "all men are created equal" I put them in the same category as the most hateful fistees.

The shirt could have said tourist or newcomer, but they chose Haole. What self-respecting caucasian is going to want to be a part of that pro-dairy movement now - knowing that the core backers hate him/her.

I'd like to see Mel or Chief Perry or the Mayor or Trask or some other local aggressively call this out and shame the shirt wearers. It borders on hate speech.

Hate speech? Get serious. It's Freedom of speech.

I CHOOSE a PIG & COW OVER a HAOLE ANY DAY

Well, there's another PR opportunity flushed down the crapper. It's "I WILL CHOOSE," not "I CHOOSE." Yes, yes, I know what they'll say, "Look at the photo, you font-challenged idiot, there's no room for WILL on the T-shirt!" True enough, but that's why the Grammar Gods invented contractions. "I'LL" is perfectly correct, and would easily have fit across the broad shoulders of the shirts' wearers.

"I WOULD" is also correct, and could be contracted to "I'D," which'd have the additional benefit of being misread by nearsighted cops as "I.D." and frustrated Freudians as "ID," thus adding existential layers to the pig & cow shit debate.

But no, instead of contracting, they slap bad grammar on their backs, which only provides snicker-fodder for haoles lurking behind them. C'mon, guys. Next printing run of T-shirts, get it right.

And if the tourists complain about the smell, just tell them it's Mahaulepoo.

Yea not hate speech. Really bad though.
A police commissioner almost lost his job over a hop sing joke.
Save the dairy, after all we all hate white people. Nice message.

I take it as a fun t shirt that is honest. Haoles have made absurd arguments, certainly only newcomers would prefer tourists to cows. So this haole girl thinks it is ok to make fun of the situation.
Lack of understanding of life's priorities for regular people here whether local born haole or local.
Certainly people like Bridget are causing the sentiment.

Why don't you do an Abuse Chronicles report on the developer? He's got 2 unpermitted TVRs in Anini that the Planning Department fined him for, $20,000, that he's appealing.

That shirt is funny. the 15 that wore it feel that way, so don't get all huhu about it and start a race thing. Quite honestly all this grumbling and finding wrong in every single thing is quite annoying. Nowadays you can't even think for yourself with all the noise created. Rather than debating a bunch of nobodies go out and enjoy what you got while you have it.

I laughed at the tshirt. Yeah, hotel would have been funnier than haole, but so what. It's what the anti-ag crowd has created - a division in the society of the island. Local and old time haole versus the newbies with their foodie rules.