It's puzzling — and sad — to see Hawaiian independence activists aligning themselves with the mainland-based Center for Food Safety (CFS) and anti-GMO activist Vandana Shiva. Especially under the guise of aloha aina, coalition-building and getting educated.

I mean, aren't they aware of how the CFS-led anti-GMO movement has polarized rural Hawaii communities, used strategies that made a mockery of aloha, turned off mainstream voters and intentionally distorted the truth?

Other than taking up arms, little could marginalize independence activists more than hooking up with the mainland's anti-GMO crowd.

Yet this flyer and message is now circulating on Facebook:

This event is not the cure all, but one of many steps we will need to take to gain control of our future here is [sic] Hawaii. I hope you will be able to kokua in any way you can to attend, get others to attend, send out this flyer, get involved, talk with others, etc.

We hope to start this new year with some kind of a focus and momentum, and it starts with coming together and being educated!

Its [sic] not the corporation's hale, Its [sic] the PEOPLE'S HALE! 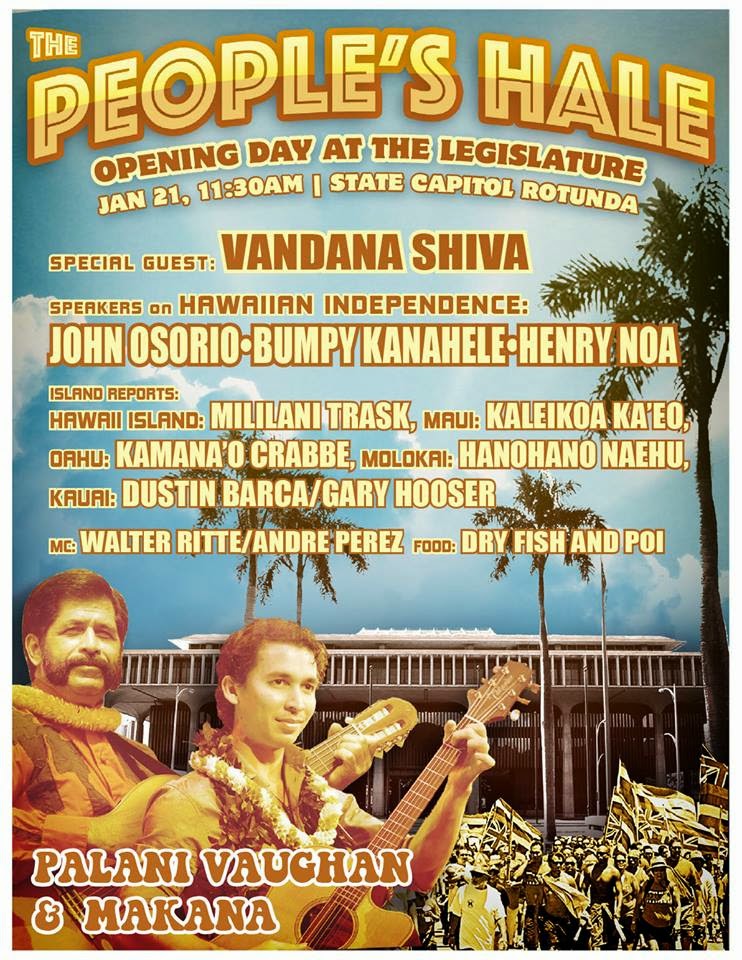 Shiva, on her third tour of Hawaii, is listed as the special guest. As I've previously reported, her speaking fee is $40,000, plus first-class airfare from India and expenses.

Do you know how many hulihuli chickens the Reinstated Nation of Hawaii has to sell to make $40,000?

So is any of the mainland dough that funds the Hawaii anti-GMO movement being shared with independence activists? I mean, aside from Walter Ritte, who has been on that payroll for some time now.

And truly, are Dustin Barca, the ill-informed, paranoid ranter who failed in his mayoral run, and Gary Hooser, the smug ideologue who barely got re-elected to the County Council, the best people to represent Kauai in anything, much less a coalition seeking major changes in governance?

Curiously, CFS's Ashley Lukens is distributing her own email flyer — one protected by copyright, no less — that says absolutely nothing about Hawaiian independence or aloha aina or coalition-building.

No, it's all about Vandana Shiva and CFS Director Andrew Kimbrell, who lives in Washington, D.C., trying to pass themselves off as “Together, we are home rule.” 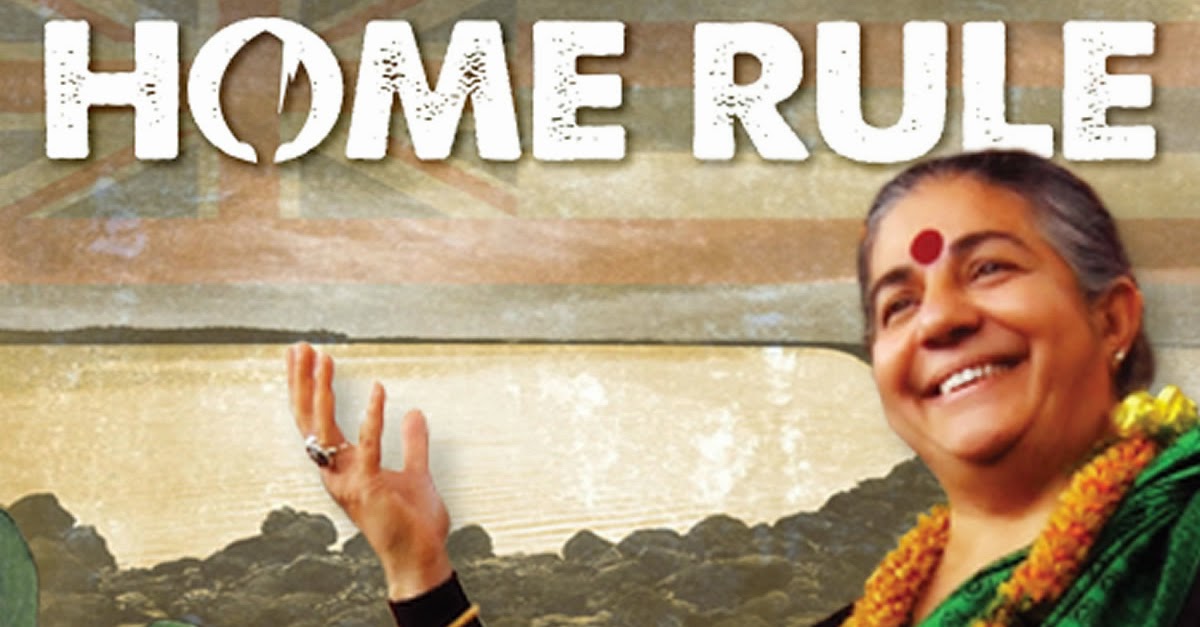 Whose home, exactly, are they talking about? And whose rule, other than the one they want to impose?

We're supposed to be excited because “Dr. Shiva will help bring our stories of struggle and triumph to the rest of the world, carrying forward Hawaii’s victories to all who are fighting for increasing control of their food system.”

What victories are those, exactly? A promo video for the “Home Rule Tour” claims, “We Are Winning,” even though two of the three anti-GMO bills have been struck down and a similar fate likely awaits the third.

Meanwhile, people who actually could be working for meaningful change are being distracted by this charade, which promises much, but has actually delivered nothing but discord, disunity and donations to its own coffers.

The CFS website claims that Shiva "ignited and empowered the food movement in Hawaii." Yet CFS and Shiva have focused entirely on destroying the seed companies. They have done nothing to actually achieve "food sovereignty" by getting farmers on the land or improving local food production.

I have long supported the Hawaiian independence movement and efforts to promote true aloha aina in the Islands.

But CFS and Vandana Shiva are not and never will be the means to that end. They have their own interests and agenda, and the earnest folk of Hawaii are pawns in their battle, tools to achieve their own personal ends.

The anti-GMO movement — funded and directed by mainland "1%" foundations and international corporate interests — is nothing more than the newest version of colonialism to hit the Islands. And it's all the more insidious because it's being passed off as “home rule” and "food sovereignty."

This alliance can only hurt kanaka.

Aloha Joan, unfortunately your right, Hawaiians are getting used. Plus super lame that 2 true "haoles" (Hooser abd Barca) are representing us. But maybe that's saying a lot about the fact that the majority of Hawaiians here aren't on board with this whole thing.

Joan wrote:
The anti-GMO movement — funded and directed by mainland "1%" foundations and international corporate interests — is nothing more than the newest version of colonialism to hit the Islands. And it's all the more insidious because it's being passed off as “home rule” and "food sovereignty."

Exactly right. It's the old "conquest by social conversion" solution that worked so well for European colonialists in the New World.

Convert the natives' way of thinking and speaking, and their pocketbooks and votes will follow.

It's just cool to be anti-GMO, don't ya know? Somehow those of us who are in the industry being targeted have not been able to shake off the corporate shill image. We need to do a better job of improving our image so that we too are cool!

Strange brew, Haole new-agers and Hawaiians.
The blending ingredient is that the newcomers are against development. Many Hawaiians are as well, preferring fewer cars and crowds.
The problem is, the newcomers are usually comfy. They gots some kala, and are against development just to keep "their" Kauai tranquil..It is their island now.
Da Hoos will brown nose everybody and anything to advance himself. Sometimes the physical act of brown nosing, pushes Gary into quite dark and slippery areas. Please, no referencing the Fistees here.Phew. No wonder he has a smug smirk.

hawaiians get over yourselfs...barca an hooser love the land,they aloha aina,they fight for a healthier hawaii for ALL the people who live here...yeah they not hawaiian,but that dont matter.i see hawaiians working for companies that poisoning the aina for $$$$....it dont matter wat race you are its the lifestyle you live that matters..i would follow barca an hooser before most hawaiians out there.....

I miss the Bynum.

Hooser loves the land. That's why he sells it.

the lack of critical thinking and education shows.

I feel sorry for Nainoa and the other bradas and sistas freezing their okole off on their voyaging canoe in the middle of the ocean trying to get the world to understand that the Hawaiians are a strong and vibrant people and not into victimization. Meanwhile back home the phonies, some of them not even Hawaiian, get all of the press.
They don't need Vandana or any other outsider to show them the way or tell their stories!

Well said, Joan: " I have long supported the Hawaiian independence movement and efforts to promote true aloha aina in the Islands.

But CFS and Vandana Shiva are not and never will be the means to that end. They have their own interests and agenda, and the earnest folk of Hawaii are pawns in their battle, tools to achieve their own personal ends."

It's easy for me to understand why the Hawaiian Independence/Sovereignty movement is anti-GMO. Why allow huge multi-national corporations control the government and aina? Why allow them to poison the aina for their own profit while increasing dependence on imported food? Are there any credible movements that are pro sovereignty and independence that are for GMO corporate domination of the food supply and politics? None.

You missed my point Doug. The question was not why they are anti-GMO but why they are aligned with the mainland-based movement (CFS), which is funded with money from fortunes made through polluting industries/corporations and which has done NOTHING to decrease dependence on imported food or get kanaka on the land. It's just another set of corporations trying to dictate. Can't you see that?

Basically it's like the real estate business and investors drooling at their fangs to change AG lands into developments.

The same way big land owners can't wait for corporations or new money jackpots to lease their lands instead of ranchers and farmers.

It's all about the CASH that makes these greedy people sell their ASS for a piece of the action. They have no SOUL and hide under gullible people through disinformation to achieve their master plan.

This is from a person who does not support the Chem/Bio companies disguisely known as SEED companies.

1:26: The Amish have adopted GE technology because they are realists who actually do farm for a living; they live by the plow and would die by it if they were ideologues who joust at windmills, and do not adapt.

Regarding 8:35, it appears that the real Hawaiians (such as Nainoa) are being victimized by their very own brothers and sisters who have gone awry into victimization. E ala e!