Musings: Tag, You're It

Ashley Lukens, program director of the anti-GMO Center for Food Safety in Hawaii, is featured on the cover of Hawaii Business this month, the editor-designted “It Girl” of the Islands' Millenials. 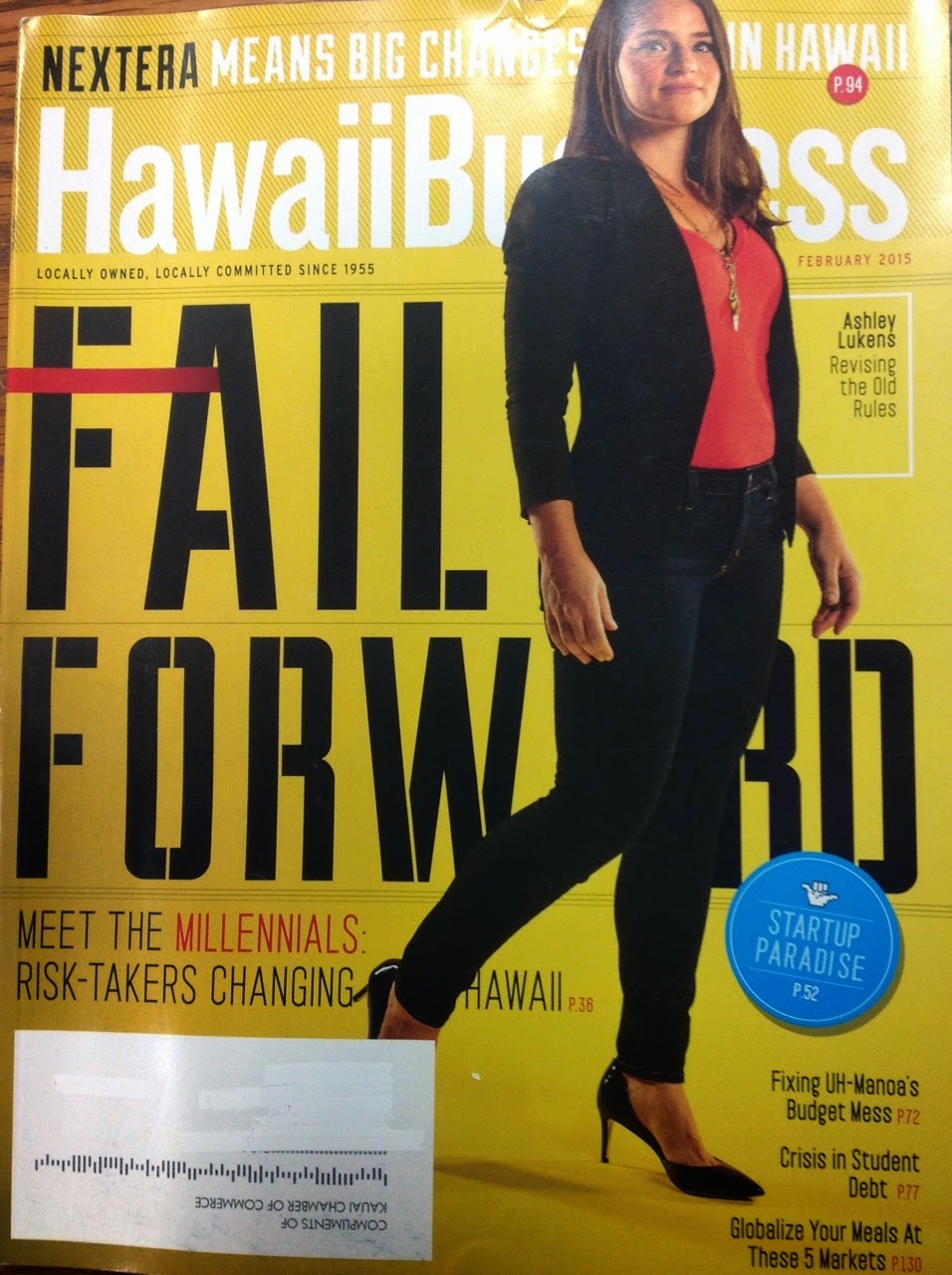 The article, which speculates on how Millenials (those aged 14-34) will “change the world,” notes that they are “all about the product, not the process” and “less attached to the 'how' than to the “what.”

Which explains why it was so easy for those in the anti-GMO movement to employ fear-mongering and misinformation campaigns, and adopt an ends-justify-the-means strategy when attacking the seed companies and by extension, their own neighbors.

The article claims that Millennials also “expect a dizzying rate of change,” which is apparently why so many believed that state and county officials would banish the seed companies after they staged a protest march or two.

And they supposedly “don’t take it personally,” according to the article, which goes on to assert:

Hawaii has historically been a thin-skinned place, where public disagreement, particularly about important issues, can be considered aggressive and antagonistic. That’s all changing.

Is it? I think one of the things that upset folks most about the anti-GMO movement was its aggressive, antagonistic approach. And given the way Ashley called me to complain about how I featured her in my blog, in large part because she didn't want her daughter to discover something unflattering about Mama in an Internet search, they do indeed take criticism very personally.

Gee, that's a stretch, considering the anti-GMO movement operates in an echo chamber, and consistently responds to different opinions by trying to silence, discredit, harass and ostracize those who hold them.

The article also maintains that Ashley is “revising the old rules” and characterizes her as a “risk-taker.”

Which old rules are those? The ones that celebrate evidence-based decision-making, transparency, ethical business practices and accountability?

And exactly what risks is she taking? That someone will expose the low moral of the movement she champions? That her role as a demagogue and propagandist will preclude her from meaningful work in the future? She already told me that Washington, D.C., sets the policy and she merely parrots the party line, so where are the guts to go with the glory?

I also had to laugh at the article's contention that Millenials are efficient and effective in their unstructured work habits. Because when I asked Ashley why her group hadn't done one substantive thing in regard to pesticide education, sustainability, farmer-training, food security or supporting small-scale and/or organic farming — its proclaimed goals — her answer was invariably, “We're working on it.”

As a friend observed:

She makes it sound like there's an actual real business there with people working and meeting and bustling around doing stuff ... And that they have a beautiful office that no one uses because they're so busy ... And that Ashley is running the Washington office from Hawaii. Give me a break. All this important sounding work and projects and deadlines. What could they possibly do all day but obsessively check email and exchange chirpy updates on Facebook? Good Christ, what a phony.

Of course, the idea that Millennials are all the same is about as silly as trying to pigeon-hole Baby Boomers and Generation Xers. Because ain't nothing attributed to the Millenials that I haven't already seen among those who preceded them. And does any generation truly change the world? Or does the changing world change them?

Which is why the article can be dismissed as the kind of superficial pap that magazines dish up every now and then in hopes of luring Millenials to buy them.

And curiously, nowhere in its fawning does it identify Ashley's real — and very old school — job: Registered lobbyist for a mainland organization that hides its political advocacy behind the facade and protected tax status of a nonprofit organization.
Posted by Joan Conrow at 7:38 AM

Ashley Lukens is a poster child for today's culture of lobbyists, marketers and media mavens, whose real agenda is to promote themselves.

Because ain't nothing attributed to the Millenials that I haven't already seen among hose who preceded them.

Freudian Slip or just an honest mistake on the 'T' ? Awesome article today... Keep them coming.

LOL. Just an honest mistake on the "t." Thanks for catching.

Right on as usual Joan. I was appalled when I saw her on the cover of a pro-business magazine. One cannot find a more anti-business org than CFS.

True. millennial no different than those who came before. Some, not all have a sense of entitlement not earned..... But in some cases earned but not acknowledged by boomers or gen x......but I'm sure that has always been the case through generations.

But in some cases earned but not acknowledged by boomers or gen x......but I'm sure that has always been the case through generations.

Down through the generations there always have been demagogues. The difference is that today's demagogues are on steroids. Thanks to technology, they can pander more effectively to more people than ever before.

Real demagoguery used to take time and talent. Today, most anyone can do it. Simply mix a gift for language with a dollop of charisma, stir in an abundance of narcissism, drain until you've removed every drop of social responsibility, pump the sludgy result onto the internet, and voila! Instant demagogue, ready to appropriate any issue for their own gain.

right on 8:48 ! we have our own ashley lukens clones right here on kauai - working for the money. looking for a high paying job or a big donation from billionaire sugar daddys.

Fail forward? Is that photoshopped or the real cover?

It's the real cover.

The amount of projection, self-justification and self-righteousness, and refusal to engage in honest self-reflection and dialogue from these activisits, is dizzying. Here's more evidence of what they are capable of:
http://geneticliteracyproject.org/2015/02/11/mimicking-climategate-organic-and-anti-gmo-activists-fund-legal-attack-on-biotech/

Today is the chimney bill. It should die. But if Mr Gonsalves is burning household general waste such as plastic wrappers and food, he needs to stop. There is already a law in place for this. If he is burning paper, wood or artificial logs he is within his rights.

It is the old "what is yours, is mine and what is mine, is mine" concept.
It is hip to be anti-GMO and Anti-chemicals. I even have gluten free concrete in my driveway.
As Kauai's population grows with people not dependent on having to work for a living, these sentiments will grow.
How nice to raise the drawbridge and get rid of those pesky toureye, dusty fields and Box Stores. The push toward being a quaint little village will persist. Locals need not apply, service entrance only. Kauai the new Sausalito or Malibu. No hotels, no farms, no Box Stores, only wealth...and of course the Mexicans that are bussed in to do the daily toil and labor. Ain't Amerika grand. Move here today, change it tomorrow. All it takes is bucks. Each according to his ability and each according to his needs?