Musings: Deal With It

Within hours of Gov. Ige announcing he signed HB2501, which allows time to revamp the complex revocable water permit process, opponents posted a "shame on you" video.

Really? Is that the best they can come up with? More regressive shaming from the self-proclaimed progressives? Do they really think that's going to turn anything around?

All the while they're ignoring Ige's statement, which specifically acknowledges East Maui farmers, and the fact that this issue isn't just about their hated enemy, A&B. It's also about KIUC, HECO and the many small farmers around the state who are functioning on the admittedly flawed revocable permit process.

But in their desire to stick it to A&B, and make it all about them, they're prepared to screw over everyone else. And when they don't get their way, waaah. 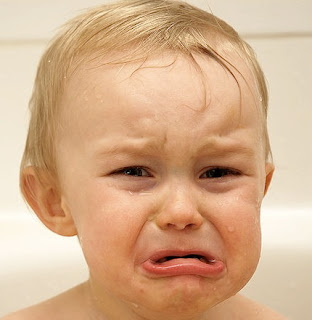 What gets me is that these activist groups actively engage in the political process. They lobby, they rally constituents, they run candidates, they raise money.

If they win, it's a victory for democracy, the will of the people that must be upheld — even against those who have a legal right to bring a challenge.

But if they lose, the system is corrupt, the politicians are crooked, the bad guys have bought everybody off, the judges are in cahoots.

Sorry. But you just can't have it both ways. The system that gave them anti-GMO moratoriums  — and favorable court rulings on revocable water permits and the TMT — is the same system that produced HB2501. Grow up and deal with it.

It's a concept that seems to elude so many activists. I'm not sure whether they just don't understand how the process works, or if they're convinced that magical thinking will rule the day.

For example, following the federal Appeals Court hearing on the Hawaii anti-GMO/anti-pesticide bills, folks posted a petition on change.org whining about how Monsanto was “poisoning democracy” by challenging the Maui bill in court.

As if it's somehow “democracy theft” to use the court system — unless, of course, you're Earthjustice, SHAKA or Center for Food Safety. And never mind that small farmers joined the seed companies in seeking to overturn those laws on both Maui and Big Island.

But what really got me was this:

The ruling could take six to nine months. During this time, the justices and their law clerks will be gauging public awareness, and public sentiment, of these historic cases. We will be creating more awareness-building media and, with the help of supporters like you, expanding the reach of this petition.

WTF? Do they actually believe the judges will issue a ruling based on anything other than legal precedent? Have any of these folks ever read a judicial decision, which is filled with citations of case law?

But then, these groups earn their bread and butter from fear and hype. There's no money to be made while the court is quietly and earnestly deliberating. Bang those drums! Make people believe it's a popularity contest, not a legal process.

Speaking of popularity contests, I've received a troubling report from an attendee of the recent International Society for Reef Studies convention in Honolulu that Pew Charitable Trusts was using its booth to offer scientists drink coupons in exchange for signing a petition calling upon President Obama to expand the Papahānaumokuākea Marine National Monument in the Northwestern Hawaiian Islands. 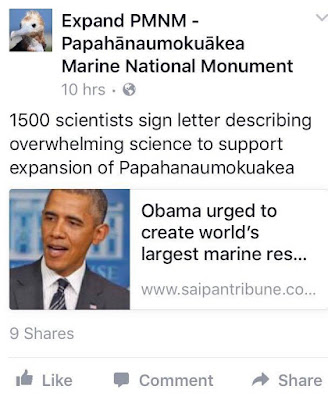 Hmmm. Hope it was at least brand name booze.

In closing, a Vermont company is seeking to help save some of the 3.7 billion birds that cats kill annually in the U.S. alone with "whimsically shaming" bright-colored scrunchies that make it tough for felines to sneak up on their prey. 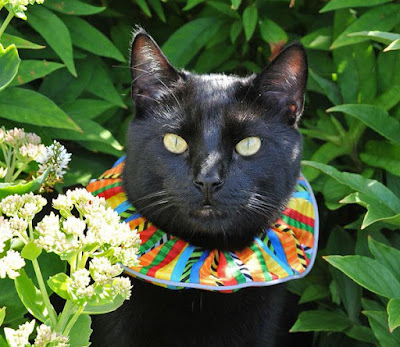 Sadly, this approach won't save the endangered Hawaiian birds that are regularly munched by the tens of thousands of feral cats roaming the Islands. These birds nest in burrows, where they're unable to fly or escape their predators. 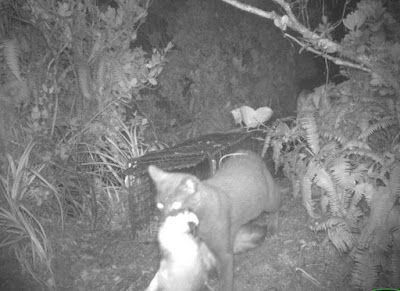 Indeed, just one cat is thought responsible for killing six of the rare Hawaiian petrels, which were nesting in a remote Na Pali Natural Area Reserve. As TGI reported:

Basil Scott of the Kauai Community Cat Project said he feels it’s “too bad this predation is occurring” and that these types of killings always bring up the conversation about the feral cat population on the island.

Yes, because we keep wondering why people like Basil advocate managed feral cat colonies, as if it's OK to allow thousands of cats to roam, and kill at will, just because they've been fixed.

Never underestimate the power of denial — especially if money and ideology are involved.
Posted by Joan Conrow at 7:24 AM

Another on-point post from a journalist who can be trusted to not only provide timely and relevant information but also lively and interesting analysis.

This piece you have written this morning dovetails nicely into another article that was published by Civil Beat, bemoaning the death of real civics education in schools.

If there was an example to prove the point of that article, this could easily be cited.

Activists like those cited in this article are only critically thinking of their own ideas, which is akin to two people sitting in a soundchamber, and agreeing with the echo emitted from the other persons voice - which by the way thinks exactly the same. As stated in the comments of this Civil Beat article, the fact that very few are critically thinking on any of these issues - instead letting the bongo-drum set take up all the oxygen on a subject, should continually be challenged by those who think critically on these matters.

For the record, the activist groups are only out for themselves - pump up their resume so they as individuals can become professional "change agents" in other issues. Well, hope that gets you enough scratch to put food on the table, because at the end what they will become is glorified grant writers on these issues, anyway.

Of all the informational and educational articles I have read about Mauai water rights, water diversions and HB 2501, todayʻs blog is absolutely the worst. Nothing at all for those who are not yet aware of the situation- no history, no words from those who are most affected like kalo farmers. Joan, as an investigative reporter, I think todayʻs blog is one of the most disappointing and useless ever. "Shame" is an appropriate word to describe it. Water issues on the islands is one of the most important issues we face today. To gloss over and ignore the real issues in favor of tabloid-like accusations against faceless "self-proclaimed progressives" is an insult to those who would really like factual unbiased information about water issues in Hawaiʻi. Joan is at it again, dividing communities into "us and them", focusing on division and condemnation. At least readers can go to the internet for a wealth of real investigative and educational articles about this important issue which so many of us are ignorant of.

@10:14 -- This post was not intended to be a thesis on the Maui water issue, or water issues in the Islands, both of which I have covered previously in much more depth. It was merely a commentary on the reaction to Gov. Ige's signature on the bill by the "self-proclaimed progressives," many of whom I have identified by both face and name over the years.

And please, don't blame me for the divisiveness so obviously created by others, most especially those "self-proclaimed progressives."

10:14 AM -- Your comments are ridiculous - you acknowledge your own ignorance. Do something about it! Joan is not the problem.

"At least readers can go to the internet for a wealth of real investigative and educational articles about this important issue which so many of us are ignorant of."

Yeah, please get educated before commenting. And while you're doing that, be careful not to reduce the issue down to ultra simplistic, black and white, good and evil, corporate v. individual, haole v. Hawaiian, all or nothing, propaganda story.

Windward sides of the islands get more rain; central and leeward less. But to farm commercially, farmers normally need sun, heat, less wind, less slope, less disease, more room, closer proximity to population, etc. This is why waters have been diverted from the windward sides.

Everyone acknowledges that the current DLNR method of allocating water (and land) permits and leases is flawed. HB 2501 provides the time to fix that process.

If we want any degree of food and energy self-sufficiency, we need to divert water. Not 100%. Not us against them. We need to share and without the enactment of this law, DLNR revocable leases are invalidated until further litigation resolves the issue. Litigation is the least efficient and satisfactory method of resolving this, and many issues.

Joan, your point is well taken - we do not want judges acting like politicians and simply issuing rulings based on the current flavor of the month. Yet, judges do occasionally issue rulings based on factors other than legal precedent, taking into account changing cultural mores and attitudes. Otherwise, we never would have gotten away from the apartheid-like precedent of "separate but equal" that had been set in Plessy v. Ferguson in 1892, to the 1954 ruling in Brown v. BOE that did away with the earlier ruling. And recent supreme court decisions supporting gay marriage are a long way from earlier precedents on that issue. So it does happen, and should happen - carefully.

Aloha Joan, great blogs. Too bad get people on this island that don't get it. "
Stupid is as Stupid Does". Something like that. No one should own the water coming down the mountains. The Hawaiians had their communities well structured. We are so greedy we like own everything. Somebody tried and the dam broke. Look what happened......don't mind 10:14, "Stupid is as Stupid does."

The taro farmers and their uninformed supporters who support ANY anti-corporate movement, have NEVER been without sufficient water for their growing needs. It always been about the idea of water diversions; not the (fantasy) damage of the diversions. This is just like the fantasy of bad GMOs. A&B has bent over backwards to ensure sufficient water flow for the needs of FARMERS. Fuck the anti-corporate transplant activists.

5:37 PM - You are so misinformed about the East Maui streams situation. And clean our your mouth with soap please!

Anger, fear, greed and ignorance. Nice. As long as the fringes keep their fingers on the keyboard and off the trigger, it's kind of you to host us.

Props to Governor Ige for announcing he will veto the AirBNB bill, which we thought was a slam dunk to become law, especially after all the support from lobbyists and the State Tax department. Now services like AIRBNB and VRBO will be unable to conceal the identities of their illegal customer/hosts.

8:38 PM ...Please enlighten us with the situation with the East Maui streams situation. What is working? and what is not working? Thank you.

Okay, anti-corporate fish food. Tell us the name of one farmer that doesn't have enough water for his/her crops due to the diversion. Just one Marjorie old bag.

Ewe. Surprising that Marjorie never once commented about the Papahanaumokuakea monument topic mentioned in Joan's blog.

Pew had a table at a coral presentation and many received free beer if they signed the Expand the Papahanaumokuakea monument petition.
They didn't card anyone! Where the liquor commission when you need them?

....And Marjorie don't call my friends shills. I don't name call anyone you know.