Here's an example of the mindset we're seeing in some of the newest Hawaii arrivals, who are all about lifestyle, but not so into local culture: 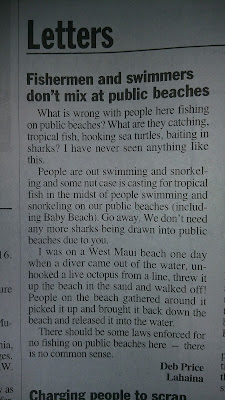 Gone, apparently, are the days when folks tried to fit into the local lifestyle. Now they want it changed. Go away? Who?

In this case, the author is a former bank officer from Anchorage who has a vacation rental condo in Lahaina. Her profile states: We moved here to Maui 4 years ago to enjoy the great outdoors, the weather is great here 365 days a year, even in stormy weather we have shorts on!

Despite being from Alaska, she is apparently unfamiliar with subsistence practices and the rights of natives and others to engage in them on public beaches.

Speaking of fishing, there's been a lot of talk recently about Obama using executive powers to approve a four-fold expansion of the Papahānaumokuākea Marine National Monument in the Northwestern Hawaiian Islands. If approved, it would become the largest protected area on the planet, encompassing some 200 nautical miles. 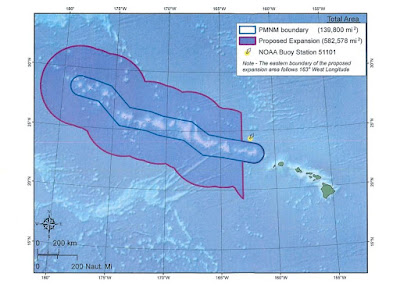 The proposal includes naming the ever-so-efficient and nonpolitical Office of Hawaiian Affairs as a co-trustee, a provision sure to increase both costs and chaos, with no appreciable returns.

Commercial fishing currently is prohibited in the monument, so the prospect of its expansion has alarmed the longline fishing industry. They've expressed concerns about the potential financial impact on those who fish for prized ahi, as well as further government restrictions on where they can fish.

Some lawmakers, including Kauai Sen. Ron Kouchi and Rep. Jimmy Tokioka, have asked Obama not to do it, while some well-known kanaka, like navigator Nainoa Thompson, support the expansion.

In the midst of this debate comes an article in The Atlantic that actually mentions the NWHI. It tells of how Joshua Cinner, a social scientist in Australia, worked with reef scientists to compile data on 2,514 reefs from 46 nations. As the article reports:

And their surprising results are upending traditional assumptions about what makes a healthy reef.

Contrary to what you might think, the bright spots weren’t all remote reefs, where humans were absent or fishing was banned. Instead, most were home to lots of people, who rely heavily on the corals and who frequently fished. They weren’t leaving the corals and fish alone; instead, they had developed social norms and institutions that allowed them to manage the reefs responsibly.

“Reefs are hugely threatened. I saw my own field site melt down and completely die,” says Julia Baum from the University of Victoria. “The danger is that we lose hope, or we feel like there’s nothing to be done. That’s why this study is so important. It shows that the end state of people relying on and using coral reefs doesn’t have to be reef degradation.”

Some remote sites like parts of the north-west Hawaiian islands, which have long been textbook examples of how pristine reefs can be when fishing is rare, emerged as dark spots. Meanwhile, most of the 15 bright spots were in fished and populated areas, and near both rich and poor countries.

“Conservationists typically look for the highest absolute biomass and the places that are most untouched. These are the gems, so let’s stop people from going there,” says Cinner. “We looked for places that had more fish than they should, given the condition. Some had biomass below the global mean, so they weren’t pristine, but they were doing better than they should be.”

The preliminary analyses suggest that policy-makers might serve reefs best by helping people live with them sustainably, whether by instilling systems like property rights or getting people more invested in their local reefs. “There’s been a narrative about local involvement but it’s often very token,” says Cinner. “Our research says that’s not enough. Locals need more than just buying into something that an NGO wants to do. I think there are opportunities for conservation organizations to invest in things that allow for communities to creatively confront their own challenges.”

Such efforts stand in stark contrast to the predominant tactic for saving the seas: establishing large marine protected areas, where fishing and other human activities are restricted. “A lot of countries are going about that by marking out large areas of ocean in areas with no people,” says Baum. “It’s politically easy, as opposed to having to do a lot of really complex marine spatial planning.”


The answer, the article says, lies in "learning from areas that faced down their problems and won. We don’t get to live in an ideal world. We have to live in this one, and this one is full of people."

Just something to think about.
Posted by Joan Conrow at 8:44 AM

Expanding the monument may just be the simplest (theoretical) way to protect important wildlife migratory routes in the face of damaging fishing practices and lack of resources to effectively enforce current laws.

Sorry, but I don't think fishing should be allowed on designated swimming areas (very narrowly defined). Would you like your kekei to be hooked?

kekei? u summed up ur position and mindset on the matter with one word!

Problem is, these visitors/newcomers think EVERYWHERE is a designated swimming area. Especially now, since more and more "eco-tourists" venture out to out of the way spots that only fisherman and divers used to frequent. It's getting more and more difficult for people to fish or dive anywhere. It's very sad considering fishing/diving is such a big part of our culture that really helps connect many generations of families. In today's society, we are losing those connections, so it really bothers me when those who RESPONSIBLY try to continue fishing/diving get harassed by visitors/newcomers like this. It's really a shame.

Wtf is kekei? You must be deb price....go back to the mainland

You must not know enough to make such a horrible statement. The coastguard monitors and enforces our oceans state and federal. They have no money to do enforcements that the supporters talk about. Most likely the ocean watch will be from military.
And we all know how people feel about the military rimpac in Hawaii. They don't like it.

I have a story my unco pure Kanaka was standing around with a throw net down at then a fishing beach. It was maybe around 84 or 85. There was a tourist couple wanted to take his picture. He gave them a talk about his genealogy and how his net had a name and was charming them. Then he walked into the water looked for the pile and it rang true. He hauled it into the air he was very strong, slung it over his shoulder and came to the bucket and dumped the fish in. The tourists asked how long he would wait before putting them back in the ocean. Unco had a good laugh and said fish are for eating not to look at. The tourists stomped off angrily and unco told me they come the fish go we starve. I never forgot that.

Expanding the monument won't help the tuna stock at all. Hawaii's longline fleet takes 1.6% of the tuna harvested throughout the Pacific.

Reducing the total take by 1.6% (with a theoretical total shutdown of all longline fishing out of Hawaii) isn't going to make any difference in the condition of the tuna stocks.

What would need to be done is getting all the other countries fishing in the Pacific to control their harvest rates to make sure the tuna stocks remain sustainable. The other countries should follow the example of Hawaii's longline fishing fleet: 24/7 GPS monitoring of all vessels. Federal observers to record what's taken and encountered. Strict "take" limits that can shut down a fishery if a certain number of endangered animals are injured or killed.

By expanding the monument, the fishing fleet would be forced to travel farther, burn more fuel, and increase their fishing efforts. Higher costs, an increased price of fish in the markets, and a larger carbon footprint. All negatives.

The migratory routes are already protected with the current 100-mile-wide National Monument. Most birds, seals, and most of the turtles don't stray farther than 50 miles from the land masses they inhabit.

Great Gawd Almighty- I wake up, read the paper and what do I see? Gary Hooser staring back at me. His smug image destroyed the peaceful morning. The GI does it again posts their poster boy. Free political advertising of the most curious nature.

Da Hoos does a mailout to find that Kauai residents are concerned about traffic. Call Mensa, a real brainiac.
Th GI should give equal print to ALL candidates.
And his "survey" is skewed because only those who agree with him would send back a questionnaire.
Hot button issues of Ag and Dairy? Get f8ckin' real Gary....The hot button issues are traffic, road repair, Housing and controlling the County Budget. Chokin' on my homegrown GMO free Thailand imported sweet papaya.....Gary does not deserved to be elected. He divides the community, is self righteous, a crybaby and a spendthrift that is in the pockets of elite fad-master mainland groups.

HTL is very intelligent. His posts ignite peoples asses. They are quick to respond. If you did not know ..... You would believe him. And if you knew you'd respond. He is good at what he does.... pit one against another. Keep in the background and laugh all fu....g day. fools are we??


I agree with08:36 except the" very intelligent" part. I think that if you do not have a conscience you can play that role easily. Luckily very few people are this conscience free ?. Weeding the narcissistic pollitition is complicated at county level were you think people are being well intentioned.

Expanding the monument is for military purposes, period. Thats why George Bush set it up in the first place and why Obama is looking to expand it - to keep Chinese spies posing as fishing vessels from gathering data and possibly material from tests conducted at PMRF. All the noise about protecting the islands and the reefs is just a smokescreen.

And the recent push to make the Aegis Ashore complex at PMRF operational is a scam as well - just an excuse to get more military funding and a few jobs here. Its effectiveness against missiles is close to zero, as its not mobile (like Aegis ships), in a real threat situation it would be the first thing destroyed and the geometry for a successful intercept from North Korea (who cant get much of anything past Japan) is less than optimal. The older I get, the more I realize just about everything is built on lies.