Musings: Anatomy of a Propaganda Play

A successful propaganda campaign depends on controlling the narrative, and Hawaii anti-GMO activists are very wise to this trick.

Which is why they began their efforts to influence public opinion in the Islands and beyond with a series of carefully constructed articles, written and financed by anti-GMO sympathizers.

I first wrote about this initiative back in November 2013:

The Media Consortium has launched a “two-year collaborative project involving ten news organizations that will send reporters to Kauai to cover issues regarding pesticide-based pollution, GE food, corporate influence and other important topics,” according to an announcement by the Food Integrity Campaign.

It's sponsored by the Media Consortium, whose website maintains:

Millions of Americans are looking for honest, fair, and accurate journalism-we’re finding new ways to reach them.

Turns out, though, that the reporting was neither fair nor accurate — and certainly not honest. Unless you believe it's OK to pay a supposedly independent journalist to tell a certain sort of story.

Which brings us to the Inter-Nation Cultural Foundation, a Kauai nonprofit created and bankrolled by anti-GMO advocates Shirin and Ken Hunt. In its 2014 tax return, it discusses spending $37,402 to support “The World is Watching — Kauai Media and Journalism project.” The return states:

With the help of our supporters and contributing journalists, we achieved the following:

Formed partnership with the Media Consortium; island visits and reporting by Truthout, Yes! Magazine and Earth Island Journal; published first round of articles shedding light on pesticide issues facing Kauai; published seminal article (The Kauai Cocktail), a data-supported expose on pesticide as part of a coordinated release with Grist, The Nation, Truthout and several participating NGOs.

The Kauai Cocktail was written by Paul Koberstein and published in the Cascadian Times. Rife with speculation and factual errors, it included such bizarre and unsubstantiated pronouncements as:

The four transnational agribusinesses that are experimenting with genetically engineered crops on Kaua`i have transformed part of the island into one of the most toxic chemical environments in all of American agriculture.

For the better part of two decades, Syngenta, BASF Plant Science, DuPont Pioneer and Dow AgroSciences have been drenching their test fields near Waimea, a small town on the southwest coast of Kaua`i, with some of the most dangerous synthetic pesticides in use in agriculture today, at an intensity that far surpasses the norm at most other American farms, an analysis of government pesticide databases shows.

There’s reason to believe that the chemical companies might be violating federal rules about the application of the restricted-use pesticide products on Kaua`i. The rules are supposed to ensure that the pesticides do their damage to bugs and weeds, not kids.

In Waimea’s gusty climate, it’s a rare day when Lorsban and the other heavily-used toxic chemicals can be applied to the test fields without the wind blowing them right into somebody’s face.

Despite its errors and outrageous statements — or perhaps because of them — this article was picked up and repeated ad nauseum on social media and in the “alternative press,” thus establishing a totally skewed version of reality on Kauai. Koberstein's article was also featured in several anti-GMO videos, providing a veneer of credibility, as if a legit news outfit had actually done the reporting.

Koberstein helped to establish this false narrative in follow-up stories for the Cascadian Times and Truthout, citing his original piece to “document” his claim that seed company practices were harming Kauai people, pushing native flora and fauna toward extinction and poisoning kids.

His misleading articles were reprinted in the Hawaii Independent, which is owned by Ikaika Hussey, board member of the anti-GMO HAPA, as well as Grist, Earth Island Journal and The Progressive, giving the Hunts a bigger bang for their funding buck and further spreading the false narrative. So much for “independent” reporting.

The Foundation also gave $22,500 to Ohana O Kauai, the group founded by Dustin Barca and Fern Rosenstiel (now a state House candidate), in 2014. The money was used for outreach to “educate” people about the “many health problems” being caused by spraying “toxic pesticides near hospitals and schools.”

I keep wondering when Fern, who is running on a transparency in government platform, will disclose how much money Ohana O Kauai took in, and where it went.

The Inter-Nation Cultural Foundation gave $3,423 to Kauai Rising, also for GMO outreach, and $1,141 to help Change for Balance produce “Aloha Warrior,” a documentary of Barca's “efforts to fight off the 5 biggest argochemical companies in the world from invading his island and their natural resources.”

The video includes Barca's usual shibai, as well as his wife spouting such nonsense as “corn is super GMOed, even if it's organic.”

Oh, just as an aside, here's an example of that "warrior's" most recent show of “aloha”: 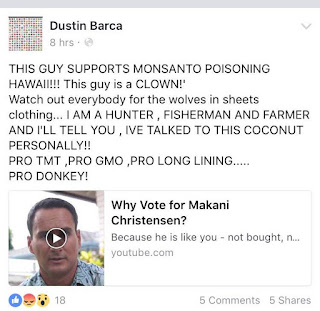 Yeah, watch our for those "wolves in sheets clothing." One of 'em might be Barca. Or the decidedly more tolerant KKK.

In closing, even though we're often told the Hawaii anti-GMO movement is “spontaneous” and “grassroots,” and it's generating media coverage because it's such a pono cause, the reality is quite a bit different. It's all staged. It's all orchestrated nationally with local pawns paying, and being paid, to play along.

And once again, we see a nonprofit group blessing us with the charitable activity of propaganda in exchange for its tax-exempt status.
Posted by Joan Conrow at 10:30 AM

Can someone please tell me why Barca is even relevant? What authority does he have? Position he holds? Education? Expertise? Please I am listening.

Or Fern, for that matter?

How about the rest of the activists' slate? Should we laugh or cry?

Take for example, Maui's Trinette Furtado, while she's busy putting hundreds of hard working Maui farm workers out of work, she herself is on welfare.

She has plenty of time and energy to destroy local families' lives but can't be bothered to get a job herself.

And she's fit to lead our County?

Or how HAPA's Kuleana Academy is non-partisan and won't endorse candidates... yet HAPA is pleased to show their funding sources (CFS). CFS certainly endorses candidates (Shea, etc. who have gone through the Kuleana academy). What a wonderful incestuous circle of nonsense dominating part of the debate of Hawaii's future.

Barca's choice of "coconuts" to bash is interesting: Kamani Christensen is a Kamehameha Schools graduate (got the koko) a graduate of the United States Naval Academy (got some brains) and a former Marine Corps officer with several tours in Afghanistan and Iraq (got some balls). He's self employed (got some gumption). Jealousy perhaps?

The spooky thing is Barca almost beat Carvalho in District 14.
Nadine who has been committed to bettering Kauai for decades has a real challenge from Fern.
Many NS voters are concerned with only one topic and could give 2 bananas for other issues that face the island or how a State Representative will be accepted by the Square Building denizens.
After all, Da Hoos with all of his wily skills, BS and obsequious slinking did nothing for Kauai. He created no lasting relationships and tho' he got elected to Senate Pres., he did nothing for Kauai. Even after he tried to reach imperious heights as Lt Gov and abandoned his Senate seat, he found he had no allies in Oahu. He was known as a grand-stander and an untrustworthy person. Kauai was lost in his political pandering.
Hopefully after he gets the boot this year, he can go back to being a Realater and selling multi-million dollar "Ag properties" for Hawaii Life Realters. His lack of truth telling will fit perfectly with the rest of the 2 faced liars at Hawaii Life.
A paradox, a billion dollar real estate sales company backing policies that hurt the people of Kauai. Why any one with a conscience would use any realter at Hawaii Life is an enigma. And yet A&B has a couple of the Hawaii Life peeps selling their land at Kalaheo. Bizarre - A Dope Selling Real Estate Company that is Anti-Ag gets hired by the very Ag company that it tried to shut down. The ghosts of McBryde's Camp 6 must be howling.
Anyway.
Nadine can work with people and she knows that there are many issues that face this island. Not just GMOs and Pakalolo.
Fern has big Huevohs in running for this seat. Da Hoss and his minions prolly told her it would be easy.
Da Hoos is running hard for his seat. He don't deserve to be elected. Of course JoAnn and Mason should both be ejected as well.
We need leaders who care for all of Kauai's people. All of them.
But still the NS nutjobs may just give Fern plenny votes. She has a lot of the mainland groups pushing for her.
Great Gawd Almighty Batman, it is enough to make me slip into something more comfortable......like a coma.
“It is nobler to declare oneself wrong than to insist on being right --especially when one is right.”
― Friedrich Nietzsche

This propaganda is absurd.

There was not much in Fern Rosensteil's behavior during the Bill 2491 run up and the aftermath that shows she has any interest, capacity or social skills in dealing with contrary minded people beyond demonizing them. Big Momma's way or the highway seems to be Fern's way. A turnover of the 14th District seat from Kawakami to Rosensteil would be a disaster for the whole island as her ability to cooperate with the rest of the Kauai delegation and state and county agencies is very questionable based on her scorched earth tactics. There are too many problems, issues, relationships and personalities involved in the job to turn a neophyte like her loose at the capitol on Kauai's behalf- especially since her initial foray into politics has been an unmitigated $500,000+ misadventure for us. While activism is a type of experience, this job calls for a great deal more than that alone, and she seems to offer very little else when compared to her opponent.

Haha - "A wolf in sheets clothing."
Hope they are high thread count sheets at least.