Sometimes I get these song lyrics that pop into my mind and just won't leave, and though it might sound weird, they often turn out to be messages, perhaps from my unconscious, offering confirmations, clues and insights into things that are going in my life and/or the world.

Lately it's been that Depeche Mode song, “It's just a question of time/and it's running out for you...”

I think it may be partly linked to KISC trapping the first mongoose ever on Kauai, whose presence here could just be a fluke, seeing as how the Kauai Lagoons is an easy jaunt from the harbor, and packed with all those juicy birds that until now have only known such threats as the guys who shoot at them near the airport or trap them and send them off to internment camps on Maui and the Big Island. 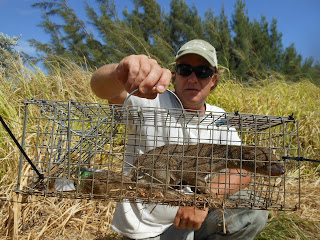 Or maybe it's the start of yet another messed up invasive species invasion, like the suspected but not yet officially confirmed arrival of the small hive beetle, an ominous discovery that has beekeepers — and as of Tuesday, I proudly became one of them — going, oh shit, as if the bees don't have enough to worry about, what with the seed companies drenching half the island in pesticides, prompting one major beekeeper to file a formal complaint against them this week when he was able to document a substantial drop in bees that fly through their toxic fields.

Perhaps it stems from a conversation I had with a friend over lunch the other day, when I told him of how two beekeepers visiting from Vancouver had told me of how they'd lost a third of their hives this past winter because it was unusually long and wet, you know, the weird weather prompted by global climate change, and so the bees were slow to get going, but meanwhile, the blueberries they pollinate were already starting to flower and the question was whether the bees would be ready in time.

And as they were telling me this, I told my friend, I suddenly became aware of just how fragile it all is, this business of timing, and how easy it would be to miss crucial windows and end up with big gaps in the food supply, and how much more likely that is now to happen, what with bee populations on the ropes and the weather becoming increasingly erratic.

“It's already too late,” my friend said, and then we talked for a while about the phenomenon of mass denial, and how hard it is to jolt people out of their high fructose corn syrup-induced stupors.

Or maybe it's because I checked out that really sad video clip on Democracy Now! yesterday, and thought, oh, gawd, how much longer can we put people through this shit, as I watched veterans of the hellish wars in Afghanistan and Iraq protest at the NATO summit where the big boys are plotting more death and destruction and they stripped off their medals and threw them away, while saying heart-rending stuff like:

I am deeply sorry for the destruction that we have caused in those countries and around the globe.
The military hands out cheap tokens like this to soldiers, servicemembers, in an attempt to fill the void where their conscience used to be once they indoctrinate it out of you.
I was a sergeant in the Army. I did two tours in Iraq. No amount of medals, ribbons or flags can cover the amount of human suffering caused by these wars. We don’t want this garbage. We want our human rights. We want our right to heal.
I was in Iraq in '03, and what I saw there crushed me. I don't want us to suffer this again, and I don’t want our children to suffer this again, and so I’m giving these back!
I’m giving back my medals for the children of Iraq and Afghanistan. May they be able to forgive us for what we’ve done to them. May we begin to heal, and may we live in peace from here until eternity.
I apologize to the Iraqi and Afghani people for destroying your countries.
I’m sorry. I’m sorry to all of you. I’m sorry.
Our enemies are not 7,000 miles from home. They sit in boardrooms. They are CEOs. They are bankers. They are hedge fund managers. They do not live 7,000 miles from home. Our enemies are right here, and we look at them every day. They are not the men and women who are standing on this police line. They are the millionaires and billionaires who control this planet, and we’ve had enough of it. So they can take their medals back.”
I sent the link to a friend who covers nuclear plants and weapons, the ultimate killing machines, and we get choke and are willing to launch another Middle East slaughter-fest, this time in Iran, supposedly to make sure they don't get them, but actually, it's just to keep the death machine functioning as an economic driver, as Rep. Dennis Kucinich so aptly observed, and he responded:
“Yeah, just another day in the Empire.
A moment ago, I read the usual Goebbels quote and had an epiphany.

"The lie can be maintained only for such time as the state can shield the people from political, economic and/or military consequences of the lie. It thus becomes vitally important for the state to use all of its powers to repress dissent, for the truth is the mortal enemy of the lie, and thus by extension, the truth becomes the greatest enemy of the state." – Dr. Joseph M. Goebbels, Ministry of Enlightenment, Third Reich
I thought, that is not true.

Jeeeeez, WTF! But, I'm right. The 24/7, wall-to-wall corporate-owned media makes it a piece of cake in a corporatist state. They are only to happy to cooperate, and get paid, for delivering the mostly unsuspecting audience.

With all the toys the boys have, it is a lead pipe cinch."

And those song lyrics keep going round in my head....

“It won't be long until you'll do/exactly what they want you to/they have persuasive ways/and you'll believe what they say...

typo:
They are only to happy to cooperate

I saw a mongoose cross the street about a year ago on Kokee road near Kekaha stores, just kokee side. Unmistakably a mongoose.

Kauai Lagoons.....
check the PMRF area....
there are reports from people who live near..years ago.

Someone catch all the mongoose at the OPA office... POHAKU Oops Excuse me, must be the beer.

Our enemies are not 10,000 miles or even a 1,000 miles away from Kauai. They are right here and we look at them everyday. They sit in the OPA office, They drive patrol cars, they work for the county, they work for the state, they work for KIUC, They work for GMO companies, they work as planning commission, Board of Ethics, and the other terror squads, they are the good ol boys and gals that control Kauai and we've had enough of them.

and as soon as those FBI guys or whatever get here, you'll "have had enough of them" too. you just don't want to be governed, period, because you aren't the one doing the governing. But if you were, you'd be just like them.

You think more mainland American influence is what this island needs? Someone else to come in and fix our problems? NO!

and as soon as those FBI guys or whatever get here, you'll "have had enough of them" too. you just don't want to be governed because you not in those offices. But if u were, u'd be just like them.

You think more mainland American influence is what this island needs? To fix our problems? NO!

To the second commenter: Hey, when someone makes a really good point, attack their grammar!

Guess that bright light of truth just too much for some. And I called my grammar "big gramma," on my mada's side and "apo" on my fada's side. You know how fo write yeah Joan? Das rite das da way for givum!

It's not influence that we need, it's people who are qualified and willing to follow the letters of the law. Instead of progressing the county of Kauai in regressing back into the plantation masters of the universe days.

A Slave once ask his Master if he was proud of what he has done, The Master replied that it doesn't matter what he thought and all that matters is the job gets done.

"Let us have faith that right makes might, and in that faith let us, to the end, dare to do our duty to understand it." Abraham Lincoln

And look how it worked out for him personally, and the country in the long time thereafter...

"The better angels of our nature" have taken the last train out of town.

Laws are for lawyers and those who want to control YOUR behavior...i.e. for those you voted and to give them something to do in Government.

Natural law is quick and without a point of view. Jump off a cliff you die.

Yes, because there's never been any corrupt FBI, CIA or DEA agents. They're all from the mainland and are as pure and white as the driven snow.

Cosa Nostra on Kauai: You know the stories and the families-Gotti

At least the secret service and military personnel was ostracized in national news and all over the web over the prostitution scandal. I gurantee that they had to face the music and disciplinary actions were taken. Here on Kauai if your connected with the GOB, you are protected to do as you please and you probably will get promoted, receive an award, get a higher paying job or a cush position. Yes we have bad apples everywhere but they are held accountable for their actions, on Kauai they get away with murder.

i heard when the dea chased away growers in kokee, they became the growers

robert ringer from winning through intimidation 1973, self-published after 10 rejections:
"the only difference between the government and the mafia is that people think we need the government"

Are more kids getting high? It's ok for us old farts not for still developing brains. That's what worries me.