The county is proceeding with construction of the concrete Path at Wailua Beach even though its special management area (SMA) permit for the project has expired.


The SMA permit for the section of the path between Lydgate and Lihi parks was approved in 2007, with the condition that “Applicant shall commence construction of the proposed project within 2 years from the date of Planning Commission approval of this Special Management Area permit, and complete construction within 4 years.”

Now an ordinary person would read that as construction should have begun by 2009 and be pau by 2011, which it wasn't. The county, however, is saying no, that language means 2 + 4, or six years to complete. So what? Is the county now going to give every other developer similar latitude?

Further, the permit was approved when the plan was for a boardwalk on the beach. The design has been changed substantially to a concrete path alongside the highway, which should have triggered another review by the Planning Commission. But the last thing the county wants is to reopen the public process.

Instead, it's setting a terrible example by building public infrastructure too close to the ocean through use of a shoreline setback variance. It's also armoring the coastline through its use of concrete — please don't tell me a concrete foot path attached to a 3.5-foot thick wall isn't a seawall — and intensive vegetation.

At least, it sure sounds like intensive vegetation, when you consider they're spending $4,000 on beach heliotrope and another $4,000 on hala, all in 25-gallon pots. No quantity is specified, which would make it awfully hard to determine whether the supplier actually fulfilled the contract. Another $10,000 is allocated for 1-gallon pots of naupaka, again with no quantity specified.

Then there's $15,000 for grass seed that is apparently mixed with gold dust at that price in addition to $6,000 for hydromulch seeding. Though why we would want to put a chemical concoction that close to the ocean is beyond me.

Take a gander through the rest of the budget. (Scroll to the end of the document.) Some $584,000 is being spent on concrete, and $145,000 for reinforcing steel. That's to make sure if you hit that wall with your car, it's guaranteed to be a big smashup. Another $230,000 is budgeted for rock facing on the concrete wall. Additionally, $42,500 is earmarked for cops and other traffic controls, with $25,000 allocated for archaeological monitoring. The pavement markers are $8,000, though it's hard to know exactly what we're paying for, as again, no specific quantities are listed.

Which makes me wonder how much the sign cost that was put up right in the middle of Kuhio Highway — and run over within a day — advising motorists of the new crosswalk that's been installed between Kawaihau and Hauaala roads, one of the most congested sections in Kapaa. The crosswalk was painted so people could get from the Kawaihau spur, which is not yet pau, to the coastal Path.

Yet for some reason the county says, no, we can't possibly have the Path crossing the highway at either Safeway or Kuamoo Road, both of which have crosswalks and traffic signals.  What's up with that?  Like so much of the Path "planning," it's all rather ad hoc and opaque.

Meanwhile, a reader sent a photo showing how broad Wailua Beach was in 1981. The county keeps claiming it's accreting — a fancy word for growing — but we all know it hasn't been this wide for decades. 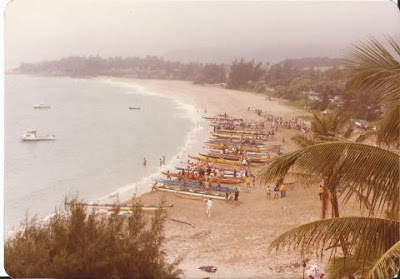 Two questions remain: why are Mayor Bernard Carvalho Jr., Lenny Rapozo, Doug Haigh and Thomas Noyes hellbent on this expensive, destructive and foolhardy course? And what will it take to stop this madness before it's too late for what's left of Wailua Beach?
Posted by Joan Conrow at 10:11 AM

Mark your calenders for March 04, 2013 and here are the details:

Maybe a causeway would make more sense…..it could be built at the height of the palms along the beach…..a great way to study the canopy! You see with a causeway….who cares how far the ocean comes in……..until it starts to eat away at the pilings.

The traffic barrier on Kuhio Highway along Wailua Beach has unexpectedly created a bike path on the makai side of the highway’s makai lane and people are already enjoying walking and riding bikes within the protected corridor.

The process of building the path using heavy construction equipment excavating through sand to install the path’s 20,000-pound concrete slabs would compromise the integrity of the beach by undermining the beach’s structural foundation.

De-stabilizing the narrow beach rims (12 feet from the high water mark) could create the need for a seawall. If that happens, Wailua Beach would face the same fate as one-fourth of the beaches on Oahu -permanent loss.

Building a concrete structure on what is considered one of the most historically, spiritually and culturally significant beaches in Hawaii would disrespect Native Hawaiian religious rights.

Please ask the mayor (241-4900) and Doug Haigh (241-4849) to please stop building the concrete path on the beach and use the highway with traffic barrier instead. Protect the beach and respect the culture. It’s not too late.

Wailua Beach has washed out more than once in my life time. Not quite as close to the road as it did this time before the sand started coming back. There is nothing sacred there. There are no bones. They were washed away ages ago. I will say there are numerous burial sites in the area. But the bones here washed out to sea ages ago. We used to see them. I really question whether anyone who comments here is in fact from here.

In the past, the water washed up to the highway and boulders were used to protect the road. So I don't know about destabilizing the narrow beach rims. But to build a bike path on a beach that has already eroded away twice in my lifetime? And that doesn't take into account future sea level rise.

These cons don't care if the beach sinks and need a wall because mark my words their con friends will be handsomely rewarded. Their friends will build a sea wall that will cost probably over a hundred million dollars like this fake transportation bike route.

Costing Kauai tax payers millions, if you cant steal the publics money then create a problem where you can take their money; just like people paying double for the solid waste program.

>I really question whether anyone who comments here is in fact from here.<

Trashing the traditions of indigenous people is a world-wide problem.

8:26 -- Sacredness is not determined only by the presence or absence of bones. Which you should know since you claim to be from here.

we should believe the experts that say the beach s accreting. don't believe what is plainly in your face.What erosion?

I think they found another set of bones - does that make 14 or 15 burials dug up for the sewer/water replacement project?

if they can revoke a permit for coco palms why can't they or why won't 'they' revoke the atrocious Hanalei Ridge development permit - when was that one issued?

Oh is it because they don't have their SMA permit YET? or because palms have been greased?

What sewer project is that?

Wailua - haven't you notice the LARGE capacity sewer pipes being installed RIGHT there in front of Coco Palms on the makai side of the road?

Perhaps the chimps now retired from experimental labs could do better planning?

What me Worry? Alfred E Newman has infected the brains of the rulers.

This is a money pit for someone.
A travesty for the citizens of Kauai. Follow da money!

Vote the Babooze out. Mayor C. Eat and play your ukelele while "Rome Burns"!

Perhaps brain transplants would help? I got scalpel will travel...

Because the county spent all the funds already. Before the project even started.

Large capacity! Lots of waste to transport and process. Foods from all over the planet.

Note the population that the water/sewer system was original built for and what the current population is. There is a 13% increase since 2000.

It desperately needed to be replaced.

quick note - publish or not -

Kauai's bike path is not the most expensive in the US. That distinguished title goes to the High Line in NYC - which has cost - thus far 1.45 miles for $153.2 million.