I've been loving these cold, clear nights, and north wind days, even though it was a bit too chilly to swim as this day began in a blaze of glory. 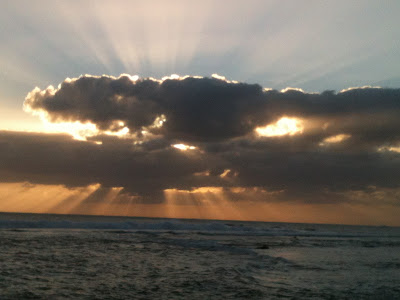 The state Legislature is also off to a blazing start, what with the PLDC already on its way to repeal and a bill legalizing marijuana being introduced by Rep. Joe Souki, the new Speaker of the House, where cannabis bills could never even get a hearing before.

As I told Councilman Gary Hooser, upon running into him at the airport last night on my way back from Honolulu, “I'm not feeling my usual despair at the prospect of following the Lege.”

I did feel sadness in seeing a kanaka arrested for fishing “violations,” while the developers and industrial ag that bear primary responsibility for the decline of island fisheries walk away scot-free with their stacks of cash.

Which brings me to a few observations on Thursday's anti-GMO event, which was all about the war that chemical companies that are now waging on plants, animals, land and water here and elsewhere with their industrial ag practices. And war is not too strong a word, considering that most chemical fertilizers and pesticides began as military weapons, with some even used to kill people in concentration camps and gas chambers.

As Dr. Vandana Shiva noted, “The agrochemical companies have now mutated into the biotech companies. My promise to you today, though I don't know how long it will take, is we are going to organize new Nuremberg trials and bring together every nation that has been harmed in this ongoing war under the guise of agriculture.”

Andrew Kimbrell, an attorney who has been successfully battling genetic engineering in the courts, was another one of the speakers, and he got right to the heart of the matter.

“Patenting life is troubling spiritually and morally,” he said. “How dare they say it's a machine or inventor's composition? That has got to change.”

In addition to clearing up many biotech myths — though genetically engineered crops have been touted as a way to reduce pesticide use and increase yields, they've actually had the opposite effect — Kimbrell honed in on the most repugnant aspect of this trend.

“They're treating seeds and animals as if they're machines and using machine values on these life forms and that's what we call genetic engineering," he said. "It stems from a wrong view of science, the view that science and technology are the same thing.”

Those machine values are also behind the disgusting practices of factory farming, which enslave some 10 billion animals in concentration camp conditions. It's also contributing to the dramatic decline of bees, which are trucked around to pollinate monoculture crops and fed genetically engineered high fructose corn syrup while being robbed of all their honey.

We can fight biotech in the courts, Kimbrell said, “but unless we deal with the consciousness that's behind this, there's not enough of us to stop the bleeding.”

That's where you, as a human being, can make a difference by raising your own consciousness about what you eat. You can help turn the tide by avoiding food that is factory farmed, genetically engineered or produced through exploitive practices, as is happening with chocolate, coffee and now quinoa, to name a few.

And that means buying organic, fair trade and local whenever possible. Yes, it may cost more, but the only reason why you're getting cheap food now is because the true full costs are being passed on to the land and poor people in other nations.

You can also sign a petition urging the FDA not to approve the first genetically engineered animal — a salmon engineered for rapid growth that could entirely wipe out wild salmon populations if it escapes into the wild, as millions of farmed salmon already do.

As Kimbrell said: “If you're a lover of seed, the land, the rivers, animals, you will fight. It's time we understood the human-owned economy needs to be a wholly-owned subsidiary of ecology. We need to live in cooperation with every other creature on Earth. Be creators, not consumers, and be participants."
Posted by Joan Conrow at 10:34 AM

Did you see the study that shows that wheat that has been GE'd to grow fast (and thus its "hungry" when it grows - consumes a lot of fertilizer) definitively causes the same intense hunger in the humans who eat it. Now GE wheat being linked to obesity epidemic, along with BPA. Proving once again you are what you eat.

I feel we are at a tipping point in history and it will be the youth who will take on this issue and fight it because they will pay the ultimate price if they do not. It was quite uplifting to be in that space with our guest speakers who are true warriors in this battle of fighting back against these chem corporations. Kaua'i will need to overcome the obstructionist politicians and force their hands or we will literally kill the life of this land.

There is no gentically engineered wheat in the food chain. Check your facts

There IS GM Wheat, and many varieties of it. Whether it goes into animal food or human food, if you eat meat from farm animals that eat the GM wheat you will still get it in the food chain.