It's opening day at the state Legislature, though I doubt Councilman Gary Hooser's call for “a million little fists” to wave alongside his own will be met, in part because we have just 1.4 million residents. I really like Gary, but somehow he just doesn't play well as Che Guevara. In urging folks to ditch everything and spare no expense to show on opening day, Gary wrote on his blog:

Of course, a million little fists marking their ballots, or better yet, holding on to the cash they would otherwise fork over to those greedy, abusive corporations, would probably have a much greater impact. But that's not nearly so exciting.

The waving fists are part of a “we the people” rally that will be calling on lawmakers to “increase citizen involvement in decisions about agriculture and food systems, land use and genetic engineering,” according to a press release.  I can get behind the call to abolish the PLDC, and more citizen involvement is always great, though most citizens don't participate as fully as they could right now.

But what, exactly, is the point of the proposed bill to label whole (unprocessed) foods that are genetically engineered? Yes, let's all waste time on meaningless legislation that will distract people from the real issues in agriculture. [Update 1-17-13: After hearing Walter Ritte and others speak at the Vandana Shiva lecture tonight, I realize I may have spoken prematurely. I will wait to reserve judgment until I read and consider the full bill.]

One of the rally speakers will be newly elected Sen. Laura Thielen, the former DLNR director under Republican Gov. Lingle who has become a darling of certain progressives because she spoke out against the PLDC. How quickly people forget Thielen was behind the plan to exploit state parks, including a hotel at Kokee.

In other news, the fire that knocked out phone service to many Kauai and Oahu offices and businesses — including KPD — shows how easy it would be for terrorists to bring America to its knees without firing a shot. Because if we can't use the phone or shop, we're good as dead.

As a friend recounted, another friend's wife was trying to shop at Costco, but they couldn't accept credit cards, so she was asked to write a check.

“Who writes checks anymore?” he asked.

“Or has their checkbook regularly with them?” I replied.

And finally, I stopped in at the Office of Prosecuting Attorney yesterday, where I was amused to see our new Prosector, Justin Kollar, at his desk in a KPD hoodie. Though to be fair, the hood was not up, and he had a nice aloha shirt on underneath. And rest assured, he has the requisite jackets and ties hanging on the back of his door for those emergency court appearances.

I'll cover our discussion in subsequent posts, but when Justin mentioned they were planning to start meeting with community groups to hear their concerns, I just had to ask, “So are you going to hand out tote bags?”

Which was a reference to the $9,500 worth of give-aways that former Prosecutor Shaylene Iseri-Carvalho bought to promote her signature (and now demised) POHAKU program — stuff that just so happens to all be orange and black, her former campaign colors.

He took me to a storage closet, and sure enough, there it all was: tote bags, tee-shirts, power clips, Zumba pens, wrist bands and my personal favorite: the stupid little rally fans that cost $1,354.16. I mean, really. WTF was she thinking? 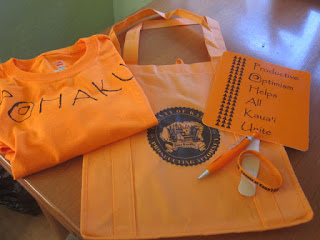 It might actually be humorous, except our tax money bought it.

Shortly after I reported on these questionable expenditures, Councilman Mel Rapozo ranted in public session about the “trashy blogs” highlighting the OPA purchases when most of the other county offices were also buying promotional gimcracks. He then showed off some of the crap he'd had Council staff collect from various county departments. It was pretty nauseating.

Mel's point was, what's the big deal when everybody else is doing it? My point is this: the Council controls the money, so perhaps instead of contemplating raising property taxes on the elderly and Hawaiian homesteaders, they could cut costs by eliminating this kind of junk, none of which is needed, and much of which will end up in the landfill.

Maybe that message would be made more clear if we all showed up during budget hearings clutching POHAKU rally fans in our little fists.
Posted by Joan Conrow at 9:29 AM

why pay a load of money to go to Oahu and protest? Nice call for people who have the funds, but most of us need to spend our money on rent and food, not airfare to Oahu. Nice idea though

All that pohaku junk sitting in a closet is disgusting. Should have never been bought at all with our tax money. Good point - now it goes to the landfill. Maybe OPA should give the bags to grocery stores to sell to tourists on consignment, and they can pay half the sales back to the County.

Is the police budget being used to buy clothes for the prosecutor? Even if it is just a KPD hoodie, does not see right. When will we get an elected official who says no, across the board, to accepting "freebies"? Now that would set a good example.

I'm old, and I worked for a senator 54 years ago and when people came by with "freebies" for him - no matter who they were he rejected the gift and stated his position that he would not take gifts from anyone while he was in office.

why are you still writing crap about pohaku when Justin Berry just got a 6 month probation plea deal?

Dear 10:46 -- I checked with Justin and he bought the hoodie with his own money.

Mel is an idiot. He's in a position to stop the abuse. But, everyone is doing it so it must be okay. That's wise, Mel. Hey kids, if you see everyone smoking drugs you can join them as long as everyone else is doing it.

The Rally today at the State Capitol was a success with an estimated crowd of 700 people from all islands. The multiple causes coordinating their efforts and sharing stage made it more orderly, efficient, dynamic and inclusive. Having the neighbor islands there made a great difference and is is the County Councils, prompted by their constituents concerned about home rule and land development issues, that are leading the way islands wide. Recall the O'ahu Council would not even put the issues on the agenda.

Walter Ritte of Moloka'i demonstrated wisdom and true leadership. Makana merged art and activism. Dr. Vandana Shiva, a visiting wahine food and community advocate from India, is a veritable Ghandi of her generation inspiring people worldwide. Others were equally on point in educating and encouraging us to come together with all our common and interrelated community needs.

And yes, Gary Hooser of the grandiose metaphor and his two little fists were there to rouse the other 1400 little fists in solidarity. So in spirit and unity we all sure felt like a million. ; ) This may be the best opportunity and start that grassroots community has had for networking and cooperating at the beginning of the Legislative Session. Mahalo to Kauai for sparing Gary and the other good Kauai folk for the day. They will be bringing a lot of info, contacts and juice back to your island, which will benefit us all. With the leadership changes in both Chambers, the stakes for food integrity, health, environment and culture will be very high, and this effort today improves chances for better outcomes.

Glad to hear it, Evan. Thanks for the report.

I wouldn't let most of the nuts on this blog "home rule" a dodge ball game.

You had me at "Mel is an idiot"

Too bad Gary squandered his position as Senator to chase the rainbow of his ambition to be on the national stage.

Buying the hoodie with his own money is a good thing, traveling to all these tulsi events and other trips is another thing. Sure he may pay for these trips on his own, but taking numerous days off to attend these gatherings within the 1st 2 months of his term???? How many people can start a new job, then take over 14 days of vacation time within 1.5 months, and get away with it?? Dont think he attends these? Go check his facebook.....i also understand that he's been with the county for a few years and probably has a lot of vacation hours. But the point is, if he just began his term on december 1st, and he vows to turn this office around, why is he taking vacation time to attend inaugurations for some chick that has nothing to do with the prosecutors office? Great white hype has his own issues that you people cant admit to. Like someone said earlier, the only difference between kollar and shaylene is their sex and skin color!

Mahalo Joan for your insights, you are truly appreciated.

In honor of PONO and Values Driven government, I share the PPA'S Declaration of Emergency , Kauai Island via Emergency Ordinance by Initiative Power, dated January 17, 2013.

The Public is invited to read and sign this Petition.
http://www.ipetitions.com/petition/kauai-island-emergency/

Contrary to the “The Aloha Spirit Law”

What is most tragic about the time in which Shaylene, and her 3 ring circus, ruled with an iron fist, and took-up space at the OPA, is the number of victims whose lives have been changed for the worst and forever. This is hard to think about.

Prosecutor Kollar, his attorneys and staff have reorganized and moved quickly to see a change in the OPA that will serve the community. The coming years will tell the story.

Kollar at his desk wearing a hoodie. This may mean that this Prosecutor is actually getting work done, and sitting still enough to do so that has body temperature is dropping...rather than his being jetting off to the Mainland to play 18 holes of golf in a sunny location, only to return with self-rightous bragging rights.

Keep the orange bag and t-shirts for Holloween. The kids will love them.

"the only difference between kollar and shaylene is their sex and skin color!"

True, except for the general differences in attitude, fairness, demeanor, vindictiveness and alcoholism. Ask anyone at the Courthouse how much better things are now.

Joan, you need to clean out your na'au-----nuff already about the former prosecutor! You and Justin keep bringing up stuff that is like rubbing salt on wounds---still not satisfied that we have a new prosecutor?! Also, you use all these Hawaiian words, like you are part of the Hawaiian culture . . . . if so, you would know how important the GE issue is to the Hawaiian community, and how plants/animals are part of their family. . like all indigenous cultures/people.

looking forward to hearing about the new faces in OPA.

Joan, there are way more important things for you to write about than the prior, present PA. We know who you side with and that's fine. I really wish you would spend time and energy to inform people about how corrupt our food system is and what we can do to make a difference for the next 7 generations! Aloha and mahalo.