As I began working on this installment of the Abuse Chronicles, lyrics from a Buffalo Springfield song started playing in my head: “There's something happening here, what it is ain't exactly clear...” And I wondered, why does the county start out doing the right thing, and then inexplicably switch course?

In this case, the county denied vacation rental applications for Lihi Kai and Hale Mahana in 2009 because both houses had zoning violations. It even ordered operations to cease and desist at Hale Mahana because of its ground floor studio.

But two years later, though the use had not ceased and the violations were not fixed, county planner Dee Crowell approved both TVR applications. And on the very same day, the county re-issued notices for the zoning violations — violations that apparently remain uncorrected to this day.

So what changed in those two years? Well, the owners hired attorney Jonathan Chun and sold the property for $7.5 million.

But let's back up to the beginning. The original owners, Roger and Barbara Batty, bought a nearly 2-acre lot in Haena and built three houses. 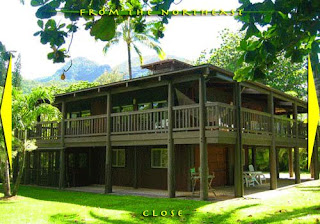 Here's Hale Mahana. Its 1981 building permit describes it as “open basement,” with no walls. 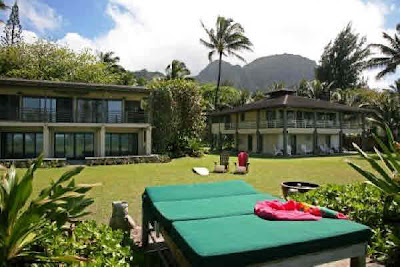 And here are Hale Kamani, left, whose construction date is unclear, and Lihi Kai, built in 1983. Like the other two houses, Hale Kamani is listed as a TVR in county tax records, though it does not have a permit.

In 1991, the Battys CPRd the property into four lots with three houses. The CPR documents state, emphasis added:

On May 22, 2008, Roger Batty sought TVR permits for Hale Mahana and Lihi Kai, providing scant evidence to document prior TVR use. Planning inspector Bambi Emayo checked out the property, denied the TVR permit and issued a notice of violation on April 24, 2009:

The county also ordered Batty to:

“Cease and desist all vacation rental operations immediately. Cease and desist use of above noted enclosure as a living unit and remove all illegal gas and/or electric service supplies along with cooking facilities with 30 days of receipt. Submit plans and applications along with filing fees for review by the department for all illegal construction, additions and alterations. Such construction, additions and alterations, without proper approval shall be demolished and removed.”

Batty wrote back, insisting the house was the same as it was 28 years ago and claiming, “The downstairs room is seldom used in the course of vacation rentals.”

On July 29, 2009, Mrs. Batty wrote to the planning department saying her husband had died on May 5, 2009. She inquired about the Hale Mahana denial, and requested documentation on why Lihi Kai was rejected, saying she hadn't received official notification, but saw the denial on the county's TVR log. She argued that the downstairs bedroom was legal.

On Aug. 3, 2009, Mrs. Batty filed an appeal of the denial. Planning Director Ian Costa responded on Sept. 4, 2009, advising her that she had missed the May 29, 2009 deadline for filing an appeal, under planning commission rules.

On Sept. 14, 2009, attorney Jonathan Chun hand-delivered a letter to Costa, advising him that he was representing the Batty trust in its appeal of both permits. On Feb. 22, 2010, the county ordered the trust to remove a gazebo that had been constructed on the property without permits, within the shoreline setback area.

On July 14, 2010, the county conducted another inspection. The unsigned report states:

On Jan. 14, 2011, the Batty trust sold the property and its three houses to TG Super LLC for $7.5 million, though in March 2000, before the TVR law was passed, the property was valued at just $900,000. The sale was done through a tax-free reverse exchange, a mechanism used by business and investment properties. At this point, however, the property was still technically residential, as it had no vacation rental certificates, though it was reportedly continuing to operate without them.

On June 20, 2011, the new owner, Alexandra Falk of Malibu, Calif., submitted an affidavit to the county in which she said TG Super would hold title until the exchange cleared and claimed, emphasis added:

The [Alexandra Falk Living] trust is informed and believes the subject property has been operated as a Transient vacation rental since 1981 under the name of 'Lihi Kai’ by the previous owners.... Lihi Kai was built in 1982.

On Aug. 3, 2011, the county inspected Lihi Kai and found things were not in order:

“Submit plans and applications for the portion of the 2nd floor lanai along with associated construction of an exterior partition wall with screen…All additions and constructions not provided and approved by the Planning Department shall [sic] removed.”

Attorney Chun responded to the zoning violation notices with a Jan. 3, 2012 letter that stated:

“The owner or its agent will submit plans and apply for all required permits to properly permit the exterior enclosure and interior partitions of the [Hale Mahana] ground floor.... [and Lihi Kai's] exterior partition wall and screen on the 2nd floor lanai.”


However, no record of any such permits could be found on the county's website. And as you can see from this recent photograph, the downstairs of Lihi Kai is clearly enclosed and inhabited, though it was built after the 1981 federal law that prohibits such uses in the flood zone. 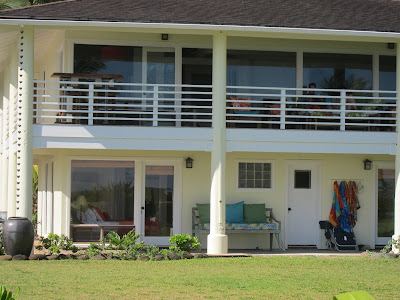 This picture shows the enclosed downstairs of both Hale Kamani and Lihi Kai, as well as the debris left by high surf, which washes right into the yard. 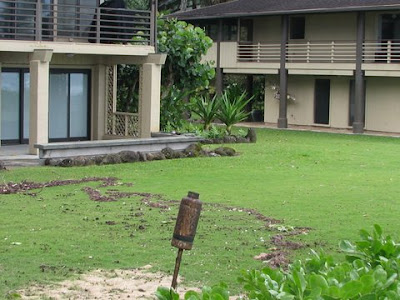 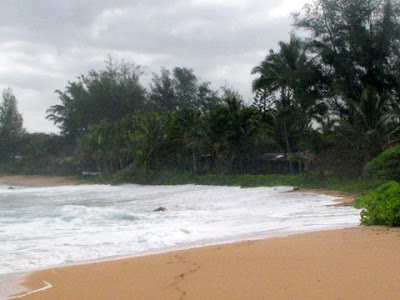 Meanwhile, Internet sites still advertise a ground floor unit at Hale Mahana, as well as a multifamily TVR, which is prohibited:

Other ads, such as this one and this one, openly promote the three downstairs bedrooms at Lihi Kai.

Aside from its apparent long-standing zoning violations, this property raises another question: why didn't the county require a Special Management Area permit for its intensive commercial use? The county's own rules require it to assess and mitigate the cumulative impacts of a project on the SMA. Yet here is a property functioning effectively like a mini-resort, sleeping at least 14 in the two permitted TVRs and an unknown number in Hale Kamani, without any review of its total impacts on either the coastal environment or the community.

To return to the lyrics: "Everybody look what's going down...."
Posted by Joan Conrow at 8:35 AM

gosh they did hire the 'right' attorney to represent them...a former county attorney with inside friends... perfect connections for the right price.

They're STEALING our beaches; see the high tide water mark! They're putting lives in danger by housing people in the flood zone. They're stealing jobs from the hotels that employ our residents. They're probably not paying any taxes. 14 people are draining the septic tanks. FRAUD, FRAUD, FRAUD. Knock the buildings down and give us our beach back!

Buffalo Springfield...credit where credit is due.

Mahalo for the correction and I have updated the post to reflect it.

Who from the County signed off on the downstairs enclosures? Fire that person!

This is a disgusting abuse of power to those entrusted to ensure the health safety and welfare of the citizens of this county.

Dee Crowell - try to fire him...will not happen or Michael Dahilig for that matter.

There is no one to fire. If it comes down to accountabilty the Mayor will move the head of the department to a postition somewhere, with a small pay cut, in the system out of the public view.

If it is the Mayor himself, everyone in the system will protect him at all cost.

I have contacted the FBI, CIA, Dept of Justice, Senator Hirono, CARCLE an reported the corruption on Kauai.

Have the courage to speak up and fight against Kauai corruption.

Don't worry 9:41, you are not the only one who has reported this. It just takes time to take them down.

In addition to having PSAs on Hawaii-bound flights play videos to educate tourists on ocean safety, can we also have PSAs asking them to build responsibly and legally if they plan on buying property here?

We have a totally incompetent planning department - a complete disgrace for the people of this island. We have pathetic little worms instead of competent leaders.

It is so upsetting to see this happen over and over again. These people get away with so much. Why?

Chronicle 11 and counting. No doubt there are countless more examples and I appreciate the investigative journalism you are committed to Joan. The real question is what are we going to do with this information? What is the next step? We can't just read about it, get angry and than go about our lives. How can we as ordinary citizens make real changes to the way our Planning Department and County in general do business? How do we put an end to these fraudulent practices? I am a law-abiding, tax paying citizen, but I get no special deals, no leeway in circumventing the laws...but if I were filthy rich and I could hire an unethical attorney like Jonathan Chun, I would be able to buy that privilege. That is a sad state of affairs. The well-connected and the wealthy keep getting more and more while the rest of live by the book and get no where. How do we change that?

Vote for someone accountable and they will hire credible leaders, no more worms.

Jonathan is not unethical - he just knows how to play the game - and he does it VERY well...

In my book that makes him morally unethical. Money over people. He's usually on the opposite side of what the community wants. Main thing his wealthy clientele get whatever it is they want. If they don't live up to the conditions imposed by the County, no sweat off his back. He's in same category as Walton Hong.

Jonathon is another one that fits into the past county attorney category that does so well for their clients. And Ian Jung, he's just waiting to join that firm. he did very good for Jonathon and the rest of the firm in getting the law changed to suit their clients.