Folks driving to the North Shore have likely wondered what's going on along Kapaka Road, where cement driveways have been poured on either side of Pooku Heiau and land is being cleared behind a new stone wall across from Pooku Stables. 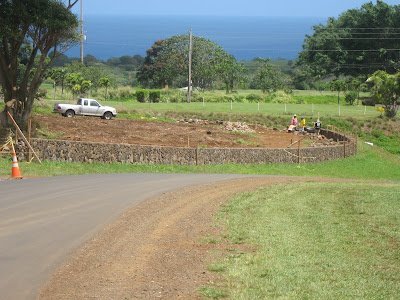 It's a five-house CPR project being developed by Jim Fields, who wants to plant native hardwoods on 30 acres nearest Kuhio Highway and deed the heiau to a community group. Fields also owns the six-acre parcel across from the entrance to Princeville, which the U.S. Fish and Wildlife Service has long eyed as the site for a new Hanalei Valley scenic overlook. Jim says he would be receptive to selling the lot to the federal agency “if it's something the community supports.”

While the overlook proposal has been repeatedly rejected by the community, what's currently meeting resistance is Jim's plan to sell house lots — priced at $2 million to $3 million — on either side of the heiau. Pooku is a luakini heiau traditionally used for training in celestial navigation and lua, an ancient form of Hawaiian martial arts. 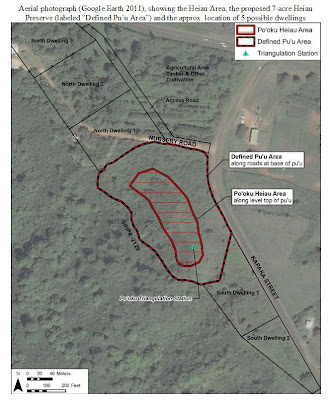 “This is like the origins of our culture, where our culture was born,” says Kaimi Hermosura, a Wainiha resident who is trained in both lua and celestial navigation. “You're talking about sea-faring navigation, the guys who set up the calendar for us from places like this.”

Jim has proposed creating a 7-acre heiau preserve that includes the two-acre summit of a steep hill that has expansive vistas and a five-acre surrounding buffer. But Kaimi maintains the heiau, which has a line of sight that extends to Kilauea and Makana, is much larger than that, and the proposed house sites encroach on it.

“It's a place of high spiritual activity,” Kaimi says. “You can't just build on it and think nothing will happen.”

Kaimi and others became upset when they saw driveways being poured near signs that prohibit vehicles and urge people to "please respect this sacred site." The signs reportedly have recently been removed. 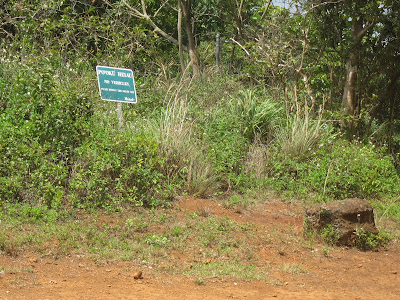 But Jim says the signs were "just put there" by the state and it's unclear exactly where the boundaries of the heiau lie. The State Historic Preservation Division has no maps of the ancient cultural site. Jim's taking the approach of “treat the whole top as a sacred area, with five acres around it as a buffer, going down the slope” toward Hanalei Valley. He has created an entity to accept the “cultural preserve.” Its members include, among others, Randy Wichman, Canen Hookano, Roland Sagum and Stuart Hollinger, a nursery owner and former county planning commissioner who has been hired for the reforestation project at the corner of Kapaka Road and Kuhio Highway.

“Is he working with the (local) families?” Kaimi asks. “Did he have a meeting with the families on this side of the island? He was informed of the need to do so. Did they do the proper protocol to acknowledge the people of this place? It's different than a blessing.”

Kaimi says proper protocol must be followed in dealing with important cultural sites to protect people from harm. “That's why we have protocol, because we care and want to make sure people don't get hurt,” he says. “But people don't understand that and think it's just bullshit.”

Jim, who owns 175 acres of mostly conservation land that extends from Kuhio Highway well mauka of the end of Kapaka Road, seems eager to extract himself from the cultural issues, saying that's why he created an entity to oversee the preserve.

But Kaimi says Jim can't remove himself from the responsibility and ramifications of developing the area around the heiau. “You've gotta be pono or you're gonna have the living and the dead coming after you,” he says.

In addition to deeding the seven acres to a charitable organization, Jim has written the CPR rules to include a provision that the five house owners must together contribute $15,000 annually to the nonprofit to help maintain the heiau.

The rules also call for houses to be set back from the rim and use screening vegetation to minimize the visual impact from Hanalei Valley, though he acknowledges it's likely that some lights will be seen from the valley. 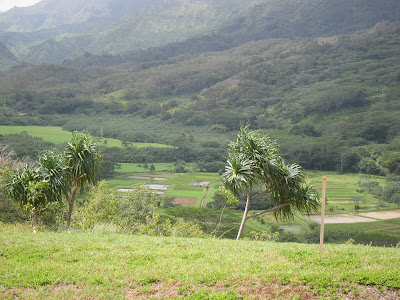 When I pointed out that CC&R rules are frequently ignored, can be easily altered by a majority of the CPR members and require legal action for enforcement, Jim said he would be willing to look at ways to ensure the homeowners can't wiggle out of their fiscal responsibility to the heiau.

Jim is also planning to make “a small secured parking area with a porta-potty, tool shed, shade house for native plant propagation and possibly an open hale” at the base of the heiau, just off Kapaka Road. The site will be fenced.

“There will be controlled access,” Jim says. “We don't want it to be a tourist attraction.”

Stuart says plans call for clearing the hau, strawberry guava and other invasive plants from the heiau and conducting educational programs.

Jim says that no one expressed an interest in Pooku during the many years that Princeville owned the site, and rubbish had been dumped there over the years.

But Kaimi says he and others do conduct ceremonies there, and he has participated in celestial navigation exercises with the Polynesian Voyaging Society there. “They say we don't care but we still go up there and do offerings,” he says. “Just leave it alone.”

One option could be moving the house sites further mauka, but that would take them out of the agricultural district and into the conservation district, where Jim is hoping to get state approval for a sixth house site. The current location maximizes the views of Hanalei Bay that add to the economic value of the house sites. The sites also look down on the taro fields in the Hanalei Wildlife Refuge. 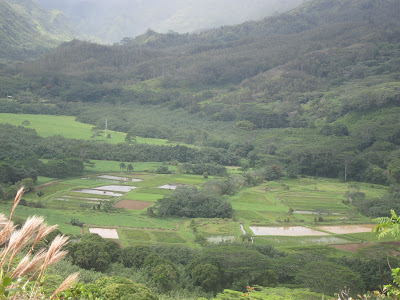 This is the first development project under taken by Jim, who says he has invested all of his retirement money into it. He says he was initially told by Realtors and attorneys that he could have the lots for sale within six months, but the project is now moving into its third year. Because it is a CPR, no public hearings are required.
Posted by Joan Conrow at 9:18 AM

This story is classic... greedy outsiders seeing dollar signs / maximizing profit and ignoring what is sacred and important.

shame on all you 'ohana who supported Omidayar. You thought oh I'll just be greedy this one lil bit and it wont hurt but now he started the domino affect and now all the ridges will be lined with homes and Hanalei will soon look like Waikiki. Hilahila, your grandchildren wont know the beauty you were blessed to grow up with.

"Duties and responsibilities include, but are not limited to, assessing the impact of development on burial sites; staffing the Kauai island burial council; conducting research to determine the authenticity of genealogical claims and claims regarding the recognition of known burial sites; as time permits, reviewing archaeological reports and permits for Kauai. Perform other duties as assigned."

Why is this job opening stationed on Oahu?

Joan I really wish that you would investigate/research and Mr. Joseph Manini Sr. position on land ownership/deeds/titles on Kauai, and maybe do a story...Mr. Manini did alot of research and inherited alot of information that I feel is relevant to all of the desecration that is going on, on Kauai.He has attended MANY County and Public hearings to express his position to no avail by the mainstream media...May be it's time to re-learn what we think we all KNOW! ....we may be able to put a stop to the desecration of the this beautiful Island.

40 years of research to be exact!(and the refrences to go with his conclusions!)It would be AWESOME hearing his Mo'olelo from your perspective! Much Aloha, Noelani

CPRs will be the final nail in the coffin of this island.

they are an abomination of land rights.

fight for a change in HRS 514A and then make the county hire someone that can actually read laws and administer them.

you know who is in charge of that in the permitting department, right? the same lady under investigation in the Bynum fiasco.

Aloha:
Back when Princevile developed all of the land across from the Pooku Heiau it was 25 acres Ag lot.
Then came the cpr's. Now it is 5 acres lots with major buildings. There were never to build on the rim lots. EVER
Those signs were put up by Princeville Corp.to keep people from dumping green waste near the Heiau. Now someone sold the land and this is happening.Auwe

This first time developer should file a lawsuit on the realtor who sold it to him if he did not disclose it is a sacred site. A navigation Heiau is dependent on darkness. This guy should give up these plans now. And what kinda hewa bs is it to give away the heiau, let's see Stuart Ex. planning commissioner, roland, ex legislator, currently charged with stealing rocks from a historic site,another from another county commission. He should have bought another piece with development potential, this one needs preservation.

Has anyone seen this document.

Not seen it myself but was adviced it was part of an August 2012 meeting of the Kauai Historic Preservation Review Commission. I'd really love to see that documentation.

The central platform of this luakini classed heiau was said to be terraced on all sides. Being its also used for celetrial navigation, that would mean that much of the pohaku or stones were part of the study of the path of the sun, moon, stars, special celestrial events.

imho, I believe a review of current land management practices is needed, as well as a shift practices that encourages better relationships between the local native community, DLNR, and real estate business...while at the same time preserves our cultural sites for generations that continue to do the research, the practices, and protocols.

Roland Sagum managing the 'entity' "he has created... to accept the cultural preserve.” ? The heiau desecrating rock stealing RS? No, no reason for concern here. Sagum, Former representative Sagum pleads no contest for theft: http://thegardenisland.com/news/local/crime-and-courts/former-representative-sagum-pleads-no-contest-for-theft/article_f06858a4-a1ab-11e2-b25c-001a4bcf887a.html

I wonder what kind of chemical pollution and contamination the princeville nursery left behind?

Manini is borderline insane. Not to mention rude and unpleasant.

Thrum in his 1906 Hawaiian Almanac and Annual said of Po`oku: "An unenclosed heiau of about two acres in area. Of luakini class, terraced down all sides from the central platform.
"Crow's Nest" is a local and modern name for the hill on which it stands."

How pleasant would you be if someone stole all your family land?
.

These are individuals. What is the entity? Is it even legitimate?

Why are the SHPD documents not available online?


Isn't that one of the reasons that they are in jeopardy of losing all of their federal funding?

Cut the talk and just allow the existing contour trail to the heiau. It won't be a "tourist attraction." What's wrong with visitors paying respects at Hawaiian cultural sites.

mahalo Joan for this good work you have done.
it is of great value to the island community.
keep it up!
jonathan jay