So the PLDC is dead, with Gov. Abercrombie saying “get thee behind me, ASAP” and the Star-Advertiser claiming the law “will likely be remembered at the state Capitol as a cautionary tale of government hubris.”

Mmmm, I don't think so. Not when you see the kind of hubris that's been going down this session. And not when you have people like Sen. Donovan DelaCruz, co-architect of the vile legislation, proving he still doesn't get it with comments like this:

"It's really about implementation," he said. "The administration is going to have to be a lot more proactive in communicating with the public and the communities once a law gets passed as to how things are going to be implemented so that we can address concerns as soon as possible."

Gee, Senator, you would have heard those public concerns if you'd actually held a hearing in the Legislature, like you're supposed to, instead of secretly ramming this thing through.

So three people are dead — murdered — in Boston, 141 are injured and countless others are shaken, shattered, by the reminder that no, security cannot be guaranteed.

We're now getting saturation media coverage, with even our own little paper looking for a local angle. Yet there's barely a murmur in the media about the 175 children — here are their names and ages — who have been murdered by U.S. drone attacks in Pakistan and Yemen.

I know some folks don't want to hear it; it offends their sensibilities to put our own government on par with a bomber dealing death at a marathon, but the end result is the same: senseless violence that begets more senseless violence.

Because right away, how does our President respond?

We still do not know who did this or why. And people shouldn’t jump to conclusions before we have all the facts. But make no mistake, we will get to the bottom of this. And we will find out who did this; we’ll find out why they did this. Any responsible individuals, any responsible groups will feel the full weight of justice.

Somehow in America the promise of “justice” rooted in the rule of law has been perverted to mean revenge. And the killing will continue until we all wake up and see it for what it is: the absolute wrong way to deal with anything.

So the bees are dead, by the hundreds of thousands, by the millions, and they're still dying by the scores. We know it's our fault, whether it's the poison-for-profit chemicals we use or the industrial ag we embrace or the utter lack of care we show for the natural world.

When really, it's all about power and control. 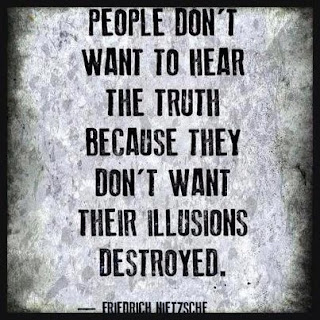 Good observation how the term "justice" has come to mean "revenge" in modern 'Merica.

That is so true.

There's even a bunch post card blinders that respond to this blight.

They didn't read the instructions, please insert image above.

Just wanted you to know that you are absolutely, 100% correct about the moral equivalence of US drones in Pakistan and "terrorist" attacks in the US. Do Americans really believe these things happen in a vacuum? Probably too busy shopping at Walmart and saving a few cents on the backs of the world's exploited poor to notice... We reap what we sow!

Bravo, dear Joan, for having the courage to tell the truth!

You are such a strong writer.
Keep up the good musing and I hope you find syndication somewhere...

you are such a strong writer. I hope you find syndication soon with a major international press that includes United States

An eye for an eye: we who claim to be Christians cannot deny that we have murdered countless innocents in their own backyards! And spending millions to invent the ultimate killing machines and so proud of our prowess.

How many more innocents are sacrificed to prove that America is the greatest nation in the world? I do not see an end to killings in this generation.

The only hope for any of us, individually or collectively, comes from truly living as Christ exemplified, rather than simply claiming to be a "Christian". Talk (and text) is cheap...